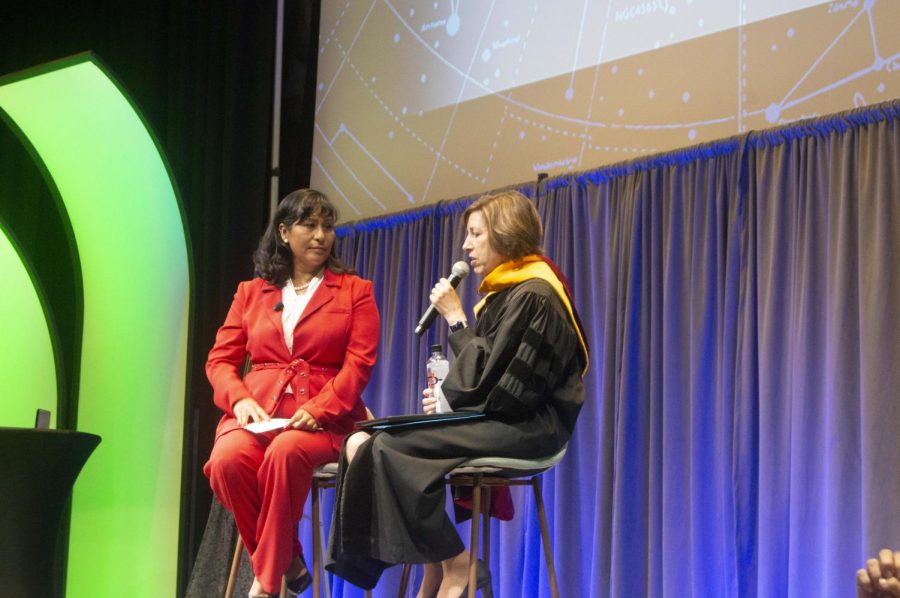 Ochoa, who became the first Hispanic woman to go to space in 1993, returned to campus to speak about her journey “From San Diego State to Space” at the President’s Lecture Series in Montezuma Hall on Wednesday, Oct. 2.

During her address, Ochoa gave faculty, staff, students and community members an inside look into her journey to becoming a “space icon,” as one person from the audience put it, though Ochoa said she doesn’t see it that way.

“It’s a huge honor to be back here at my alma mater,” Ochoa said. “Receiving an honorary degree was obviously something I never thought about many years ago when I was a student here.”

Ochoa graduated from SDSU in 1980 with a bachelor’s in physics before going on to receive a master’s and a doctorate in electrical engineering from Stanford University.

A graduate of Grossmont High School in El Cajon, Ochoa was taught from an early age the value of education and the importance of learning. Her mother would take classes at SDSU, all while raising five children, Ochoa said.

“My mother taught my four siblings and me that education was important but also that it was just very exciting,” Ochoa said.

Upon entering SDSU as a music major, Ochoa said she had very little interest in a career in science, partly because nobody had mentioned that was something she could pursue.

It wasn’t until she began taking more math classes that she began to consider pursuing a science degree seriously. She began exploring her options by visiting different science departments on campus.

After being brushed off by the head of the electrical engineering department, Ochoa said she went to the physics department where she was able to talk to a professor about the types of classes she could take and what her future would look like with a physics degree.

“You can tell that the kinds of conversations that professors and advisors have with students are incredibly powerful,” Ochoa said. “I never made it back to the physics department until today.”

After sharing memories of her time at SDSU, Ochoa spoke about her time working as a research engineer at Sandia National Laboratories and NASA Ames Research Center, which proved to be a launchpad towards her eventual selection as an astronaut in NASA’s 1990 class.

After flying a total of four missions and logging nearly 1,000 hours in orbit, Ochoa remained at Johnson Space Center serving as Deputy Director until her promotion to director in 2012.

Even after her retirement from NASA in 2018, Ochoa continues to inspire young people, especially girls and underrepresented minorities, to reach for the stars.

Most recently, Ochoa made a $100,000 contribution to the university to establish the Ellen Ochoa Endowment for the Femineer Program in the College of Engineering. The gift was made possible by the Gordon and Betty Moore Foundation, for which Ochoa is a trustee.

The lecture ended in true SDSU fashion, with The Marching Aztecs surprising Ochoa, a Marching Aztec alumna and a spirited rendition of the SDSU fight song.