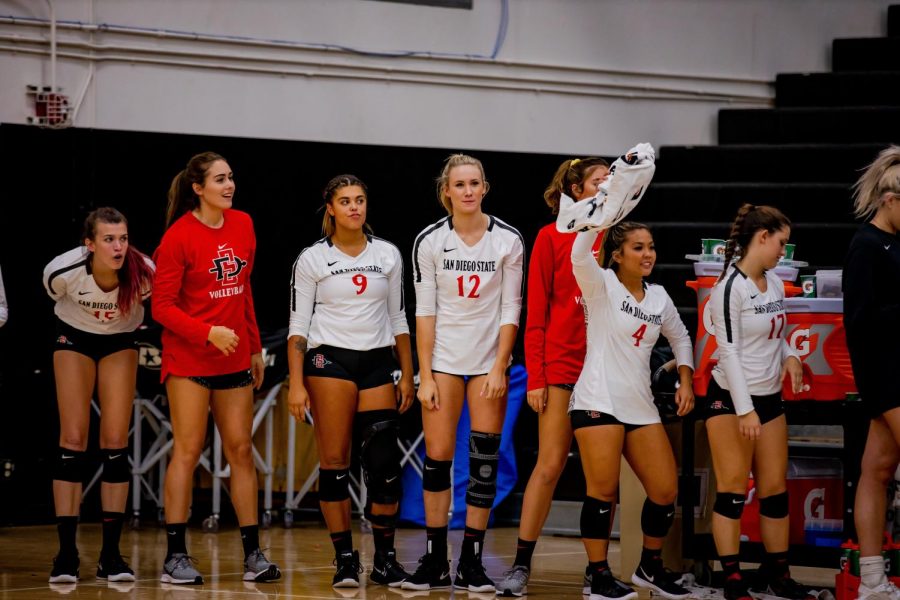 The San Diego State volleyball team's bench looks onto the court during the Aztecs' 3-1 loss to UNLV on Oct. 3 at Peterson Gym.

San Diego State volleyball enters its next game facing something for the first time other than its opponent this season: a losing streak.

The team will face New Mexico at 2 p.m. on Oct. 5 at Peterson Gym in an attempt to snap the short two-game skid.

After SDSU (8-6, 1-2 Mountain West Conference) lost to UNLV (5-9, 1-2 MWC) in four sets on Thursday, head coach Deitre Collins-Parker said the team will have to change its mindset heading into Saturday’s matchup.

“We got to make sure we take care of the ball,” she said. “It starts in practice. We got to mentally be here in person and make the plays.”

For a team that recorded 26 total errors (attack, service and block) against the Rebels, senior outside hitter Hannah Turnlund said playing the Lobos (5-10, 0-3 MWC) will be just like what they just saw against UNLV.

“(New Mexico is) going to be a good team, kind of like (Thursday against UNLV),” Turnlund said. “They are going to bring it to us. They have every year, so we have to play our game and get ready to be better.”

Turnlund’s senior mate, middle blocker Tamia Reeves, who ranks third in the MWC in hitting percentage (.382), said the Lobos are similar to UNLV, but they have to focus on themselves first.

In addition to the game, the Aztecs (8-6, 1-2 MW) will have their annual Breast Cancer Awareness game.

Collins-Parker said it is important to build recognition for breast cancer research.

“It’s important to continue to bring awareness to breast cancer but cancer in general,” Collins-Parker said. “Everybody knows someone has been touched by it and it’s nice to have the opportunity to honor our loved ones that have lost the battle, won the battle, or are going through the battle. That awareness is important, and it is a good way to find little ways to help.”

The first 250 fans in attendance will receive a pink t-shirt in honor of breast cancer research.

Turnlund said having this promotion is a good time to reflect on those that have been affected with the illness.

“It is for a great cause honoring people with breast cancer,” Turnlund said. “I know a lot of families on our team have suffered from it, so it will be awesome.”

“(Breast cancer research) so important,” Reeves said. “Everyone I know has experienced someone that has gone through that, so playing for them gets us super fired up.”

As fans in attendance will receive pink shirts, the SDSU players will wear their pink uniforms, and Reeves said she likes the pink gear.

Even Collins-Parker has picked out her attire for the matchup, and it has been long thought of.

“I have a top that has some pink in it,” she said. “It’s always something that’s on my mind every year while I’m shopping for the fall.”