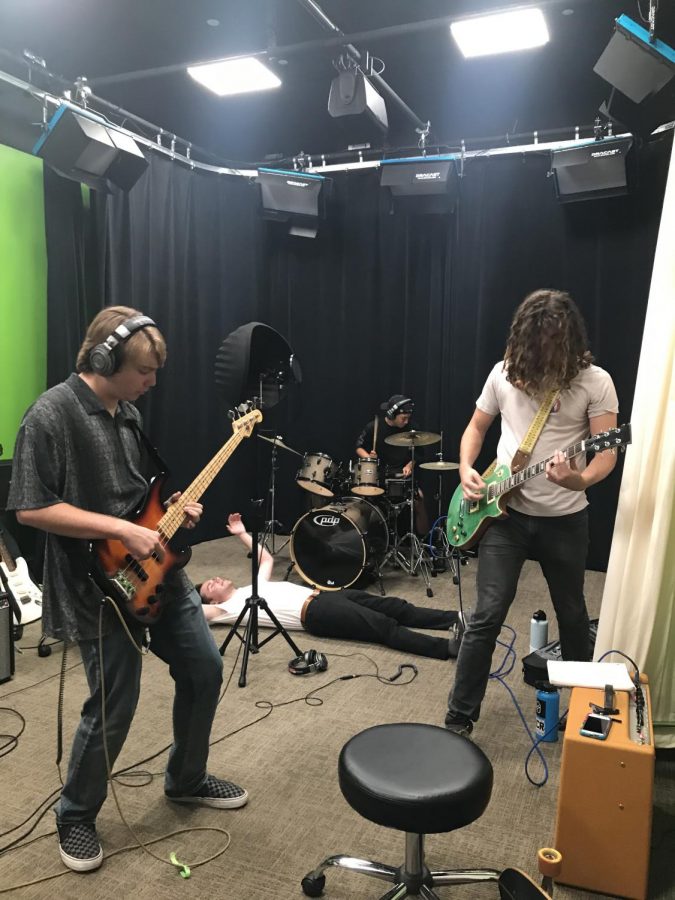 Grant Jordan lays on the floor while other band members continue shredding.

Psychology freshman Grant Jordan performs on Oct. 9, as the Nooner performance. The Nooner is held in the Aztec Student Union courtyard from noon to 1 p.m.

Jordan has been singing and creating music for about seven years. He plays guitar, bass, ukulele and piano. He also produces soundtracks and collaborates with other musicians often.

According to Jordan, his favorite aspect of music is the storytelling element and he incorporates this often into his original music. He does this by writing descriptive, visual lyrics for his songs. Jordan notes how many of his listeners make their own interpretations and stories while listening to each song.

“My favorite part of music is the cathartic and therapeutic attributes that it has,” Jordan said. “With all my songs, I’m always thinking ‘What is this song doing for me on a psychological level?’”

While his love for music spans many different reasons, he said how he dislikes the business part of the music industry.

“I don’t like when it becomes more about the image than the music,” Jordan said.

Jordan is most looking forward to playing his unreleased, original song “With Love” at the Nooner performance because it’s one of his most energetic songs and will include a twist he’s never done before while performing.

Grossmont College freshman Gigi Hewitt, is one of Jordan’s close friends. She has supported him throughout his musical career.

“Grant’s lyrics make me cry, laugh… and force me to think,” Hewitt said. “He has a way of connecting to his audience through his music in a way that feels like he’s talking directly to them. I’ve always been fascinated by his dedication to his musical career and how humbled he is towards his talent.”

His setlist will include a mix of covers and original music which will be performed either acoustically or with the full band.

He will be accompanied by a band that will provide backup instrumental. He works with a variety of rhythmic guitarists, bassists and drummers so when he wants to perform he has alternatives if the others can’t make it.

Jordan also hosts a radio show called Unknown Pleasures through KCR on Sundays from 10 to 11 a.m. where he analyzes music with two other music enthusiasts.

The Nooner performance is free and open to all students.