SDSU symphonies play by the sea 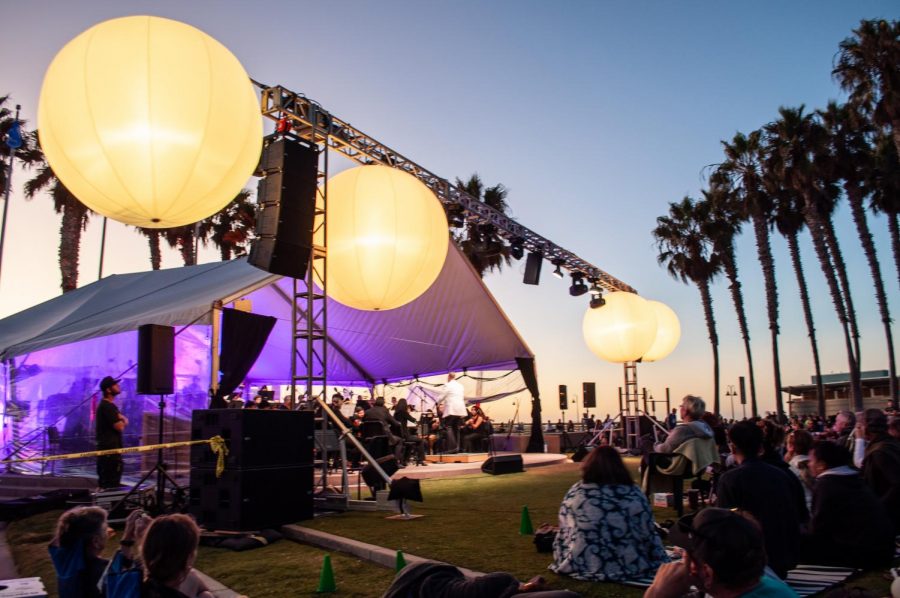 “I want to thank our awesome SDSU Orchestra and Wind Symphony,” Imperial Beach Mayor Serge Dedina said during the opening of the free show at 6:30 p.m.

He shared stories about his late father’s career at SDSU, and his childhood adventures to every free concert offered by the music department. This symphony was the first without his father, but Dedina reminded the audience that his father was there in spirit.

The orchestra began with Francis Scott Key’s “Star-Spangled Banner” and celebrated the anniversary of two musical icons — Ludvig van Beethoven and Stephen Sondheim — with their following pieces. In commemoration of Beethoven’s 250th anniversary, the orchestra performed his “Egmont Overture.” It was a favorite among the orchestra members performing that night.

“It’s a very cool piece,” film sophomore and clarinet player Joshua Lee said. “Especially the dynamics between the softer sections and louder sessions toward the end.”

They closed their portion of the night with an ensemble of pieces written by Stephen Sondheim in celebration of his upcoming 90th birthday. He is a composer and lyricist known for his contributions to musical theatre.

“(This event) is a great opportunity to celebrate this genius,” professor and conductor Michael Gerdes said.

They closed the musical theatre portion with “Sunday” from “Sunday in the Park with George,” bringing all six students, pursuing fine arts masters programs, to the stage to sing in harmony.

The juxtaposition of Sondheim’s “blue, purple, yellow, red water” and Imperial Beach’s cotton-candy sunset received thunderous applause and was a lovely finale to the orchestra’s time on stage.

“I think for an event like this it’s important that we do community outreach,” she said.

From “Jaws” to “Jurassic Park,”  the Mar Vista High School Band’s energy reverberated throughout the crowd. A real-life scream from the back of the crowd made the “Jaws” theme come to life.

“The music department has a community of its own,” music education sophomore Samuel Jimenez-Romero said. “I wish the school would give a little more support (and) that one day our program can grow.”

The Wind Symphony opened with the SDSU Fight Song, inspiring chants from the audience.

They quickly transitioned to “The Jedi Steps” and “Finale” from the first movie in the latest “Star Wars” trilogy, “The Force Awakens.” The music transported the audience into the films.

Then they performed a patriotic salute with “For the Fallen.” Other compositions included “Bugler’s Holiday” by Leroy Anderson and “Galop” by Alfred Reed.

They welcomed Carl Holmquist — composer of “Within Our Reach,” a piece featuring narration with excerpts from several speeches by Barack Obama — to the stage. Narration was provided by music education and Spanish junior Uriah Brown. The Wind Symphony played while Brown sang a powerful rendition of “America the Beautiful” arranged by Ray Charles. The audience clapped and sang along while stage lights turned red, white and blue.

They performed several Armed Forces Salutes with Brown announcing various forces, encouraging audience members who were or knew someone affiliated with them to stand for recognition. Finally, the Wind Symphony ended the night on a patriotic note with “Stars and Stripes Forever,” receiving a standing ovation from the audience with whoops and cheers abound.

“It’s days like these we remember for the rest of our lives,” Dedina said.