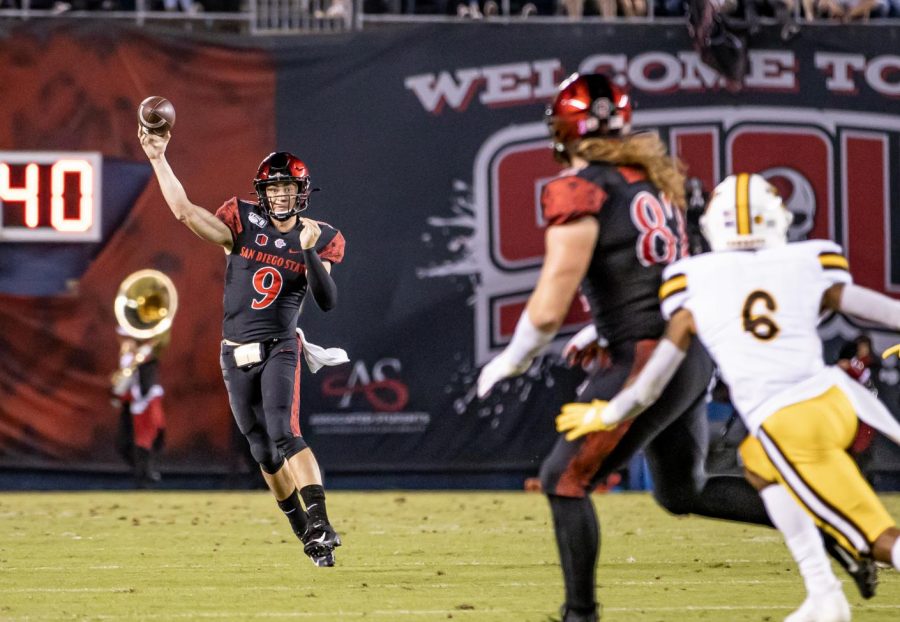 Senior quarterback Ryan Agnew throws on the run during the Aztecs’ 26-22 victory over Wyoming on Oct. 12 at SDCCU Stadium. Agnew finished the game with 209 yards and two touchdowns on 21 of 32 passing.

Aztecs use strong second half against Wyoming, improve to 5-1

San Diego State senior quarterback Ryan Agnew took a snap out of shotgun from his own 24-yard line with 6:43 left in the game.

For a split second, the offensive line froze, seemingly confused about what to do.

Agnew scrambled left into a pile of Wyoming defenders and, at the last second, made a jump toss to senior fullback Issac Lessard who gained 18 yards before losing his footing at SDSU’s own 42.

Head coach Rocky Long said the play was broken from the start, but the team recovered and made something out of nothing.

“What happened was the ball was snapped before it was supposed to be. Our quarterback improvised and did a darn good job of improvising,” Long said with a chuckle.

It wasn’t the prettiest way to begin a game-winning touchdown drive, but seven points still came out of that possession.

Agnew recorded two completions to sophomore tight end Daniel Bellinger, which eventually gave SDSU the lead. On third-and-six from his own 46, Agnew found Bellinger for a 28-yard gain. Five plays later, Agnew worked some magic by scrambling to his left, avoiding a sack and completing a pass on the run to Bellinger for a 12-yard score with 2:09 left.

Wyoming was unable to counter as redshirt freshman quarterback Sean Chambers threw an interception to SDSU senior cornerback Luq Barcoo with 1:20 left. Barcoo notched his fifth pick of the year, which ranks second in the nation.

The victory was propelled by two decisions from Long to go for it on fourth down – both on drives that led to touchdowns.

Midway through the third quarter, the Aztecs were faced with a fourth-and-one from Wyoming’s 17-yard line. Instead of kicking the field goal, Long elected to have senior running back Juwan Washington run for a two-yard gain – which resulted in a 15-yard receiving touchdown on the next play to make the score 14-13 in Wyoming’s favor.

Thanks to a sack by senior defensive end Myles Cheatum, the Aztecs forced a Cowboys’ three-and-out on its ensuing possession.

Cheatum said defensive stops like that helps the offense.

“We both played off each other,” Cheatum said of the two units. “I think (the offense) seeing us have success gave them some confidence to play better as well.”

It showed on SDSU’s next drive when it was on Wyoming’s 35-yard line, and Long was faced with another fourth-down decision.

Agnew, on fourth-and-three, found redshirt freshman wide receiver Jesse Matthews for a 25-yard completion. Washington followed that up right away with a 10-yard run to give the Aztecs a 19-14 lead with 1:28 left in the third.

Long said the decisions to go for it on fourth down twice were gambles.

“I don’t know if that was the smart thing to do or not,” Long said. “We’re not here to play analytics. We’re here to win football games, and I thought we needed to make a fourth-down play to win the game, and it ended up okay this time.”

Coming into Saturday, SDSU was ranked first in the nation in rush defense, allowing 45.4 yards per game.

Apparently, Wyoming and its redshirt freshman quarterback Sean Chambers dismissed what the Aztecs have done against the run in their first five games.

In the first half alone, Chambers rushed for 51 yards and two touchdowns on seven carries, and sophomore running back Xazavian Valladay had 61 yards on 12 carries.

The Cowboys’ run game was slowed down in the second half with 28 yards, finishing the game with 157 yards.

SDSU was able to counter with a quarterback and running back duo of its own.

Washington had 84 rushing yards while Agnew added 42 of his own to contribute to a total of 120 yards from Aztec ball carriers.

After missing two games with an ankle injury, Washington said he’s getting better by the week.

With Washington on his way to a full recovery, expect the 5-foot-7, 190-pound back to receive the majority of the carries out of the backfield.

Offensive coordinator Jeff Horton said Washington has progressed to being back to his normal self.

‘‘We’ve increased his workload,’’ Horton said. ‘‘We look forward to – unless there’s a setback – him being 100% by (the next) game because he took a big chunk (of carries) each week.’’

The win puts SDSU in first place of the MWC West Division with a 2-1 conference record. Overall, conference standings have Boise State at the top of the MWC at 3-0 (6-0 overall).