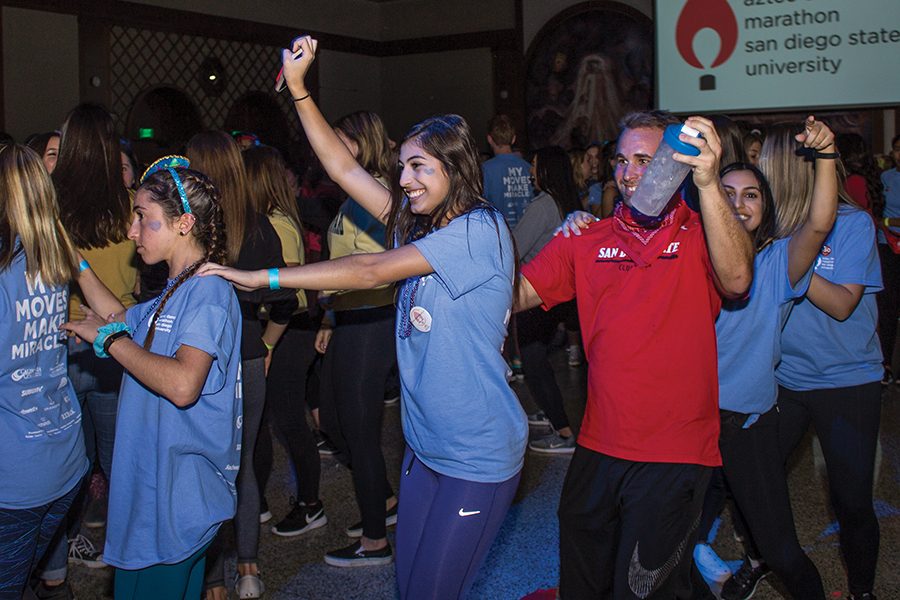 Aztec Dance Marathon raises money for local children’s hospitals. This photo was taken prior to 2020.

The Dance Marathon at SDSU team kicked off their Miracle Week on Oct. 7 to promote fundraising and registration for the annual event.

As the team began their tabling events on campus, students got a taste of what the event is about and what the next six months of campaigning will look like.

Dance Marathon at SDSU is one of many events within the Children’s Miracle Network Dance Marathon, which was made to raise awareness on school campuses across the country to raise money for local children’s hospitals. The event is the largest student-run philanthropic movement at San Diego State, according to the dance marathon website.

The first marathon raised about $40,000. Since then, thousands of students and donors have participated in the organization’s growth and success. Last year, the event raised $322,219 for the cause, exceeding their goal and breaking previous fundraising records.

The Dance Marathon at SDSU team spent Oct. 7 and 9 to raise awareness and educate students about the event and Rady Children’s Hospital in San Diego — the beneficiary of funds raised by the dance marathon.

Another day was devoted to recruitment, which was deemed successful by liberal studies senior and Dance Marathon at SDSU team member Leah Henry. Over 1,300 students signed up on the first day, and 200 more were brought in throughout the week, Henry said.

Last year’s dance marathon hosted over 2,000 people total. This included 60 registered teams consisting of campus organizations, residence halls or groups of friends. Students are also welcome to register individually, or even buy a ticket to the marathon to watch and support.

The team’s outreach efforts also included fundraising on Oct. 10. Miracle Week’s efforts lead to $38,144 raised in just one day. The marathon’s total fundraising goal is set to be released next week, and afterwards the Dance Marathon at SDSU team will keep motivating registered participants and teams to raise as much money as possible until the event takes place in February.

Each participant must raise at least $123 to get into the event, according to Henry. After that first goal is met, the team continues to encourage further fundraising.

The marathon lasts overnight on a Friday, starting at 6 p.m. and wrapping up at 9 a.m. the next morning. The 15 hours of dancing may sound exhausting, but most people stay for the full marathon.

“Our whole message is to stay dancing for 15 hours for the children who can’t, so we try not to even sit,” Henry said. “Some kids don’t have the option of getting to relax, so the message is just to keep dancing and to keep fundraising for those who need the funds. Once you’re there you don’t really want to leave.”

Children and families from the hospital attend the marathon every year to share their stories. A talent show is also held at the marathon, giving kids the opportunity to sing, dance and entertain in all different forms. These factors make it easy for people to stay through the entirety.

Speech, language and hearing sciences sophomore Leila Yashi, first participated in the event last year. She plans on dancing until her final year at SDSU.

“I do it because there are 62 kids a minute are admitted to a Children’s Miracle Network Hospital,” said Yashi. “It’s our chance to alleviate some stress from the children and their families. It isn’t just about them getting to dance, but a second chance for them to live happily and healthily.”