Sports for All symposium raises awareness, support for adaptive athletics 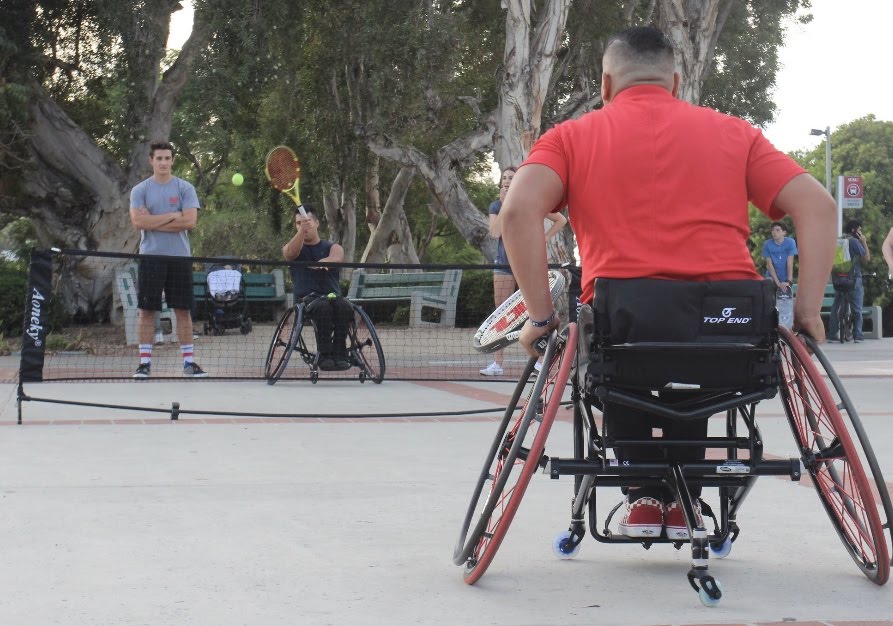 The Student Ability Success Center and Aztec Adaptive Sports co-hosted the Sports for All symposium outside Hepner Hall.

SDSU’s adaptive athletes attended the event to tell their stories and answer questions from other students. Able-bodied students had the chance to play wheelchair tennis and sitting volleyball in front of Hepner Hall.

Taylor Becher is one of three athletes on the team who attends a local community college but still represents SDSU.

She said Adaptive Athletics not only offers the athletes opportunities to excel, but it also gives them a sense of belonging, history sophomore Teylor Becher said.

“We’ve become not only really good athletes with really great coaching but we’ve become a really big family,” Becher said. “It’s really nice to have a place where we can train really hard and get to the level we want to be at while also being surrounded by people who understand us and understand what it’s like to struggle.”

Becher, who studies history at her community college, said she plans on transferring to SDSU soon.

Criminal justice freshman Amanda Malawski said the Adaptive Athletics program was the first time she had been a part of a sports team geared specifically towards athletes with disabilities.

“When I was in high school, I got really subpar training because the coaches,” Malawski said. “They tried their best to train me, but they feared that they are going to harm me.

“So to have this in comparison to high school is a total 360. They don’t make me question my ability they help me gain my ability and discover abilities I didn’t even know I had.”

Program Director Ahkeel Whitehead said Adapted Athletics provides students with a way to compete in the sports they love which brings both mental and physical benefits.

“Mentally they’re starting to build some confidence and some self-empowerment, and a sense of belonging,” Whitehead said. “Physically, they are getting healthier, they are getting stronger, they’re getting better at their sport.”

Although the program is relatively new, having been established in 2017, it has grown exponentially from when the first athlete in the program and criminal justice sophomore, Michelle Cross, started training.

“I think people are starting to actually to recognize us as a real program,” Cross said. “It’s been an amazing experience to see the growth that has come to the program.”

Adaptive Athletics worked alongside SASC to raise awareness for the athletic program.

“The main purpose was to promote inclusion on campus and educate the students at SDSU about our Adaptive Athletics team,” child and family development senior and SASC Programmer Julia Karczewski said.

The Adapted Athletics program began only a year ago and is currently overshadowed by more popular sports like basketball and football. However, both the athletes in the program and SASC are working to change that.

“Most students don’t even know we had a team because it just recently got started,” Karczewski said. “Able-bodied people, when they aren’t around it just don’t know about it and it’s not their fault.”

Karczewski said working with Adaptive Athletics has made her more aware of accessibility and the barriers to accessibility that some students face.

“It’s focusing on that it’s not just people in wheelchairs,” she said. “So making sure that if you have an event on campus everyone is included and welcome and there are accommodations for everyone.”

Kinesiology freshman Mikayla Chandler said she and the other athletes currently have their sights set on making it to the 2020 Paralympic Games in Tokyo.

“This summer we are going to Minnesota for the Paralympic time trials for Tokyo, so we’re going to be shooting for that and just trying our best to make the team,” she said.