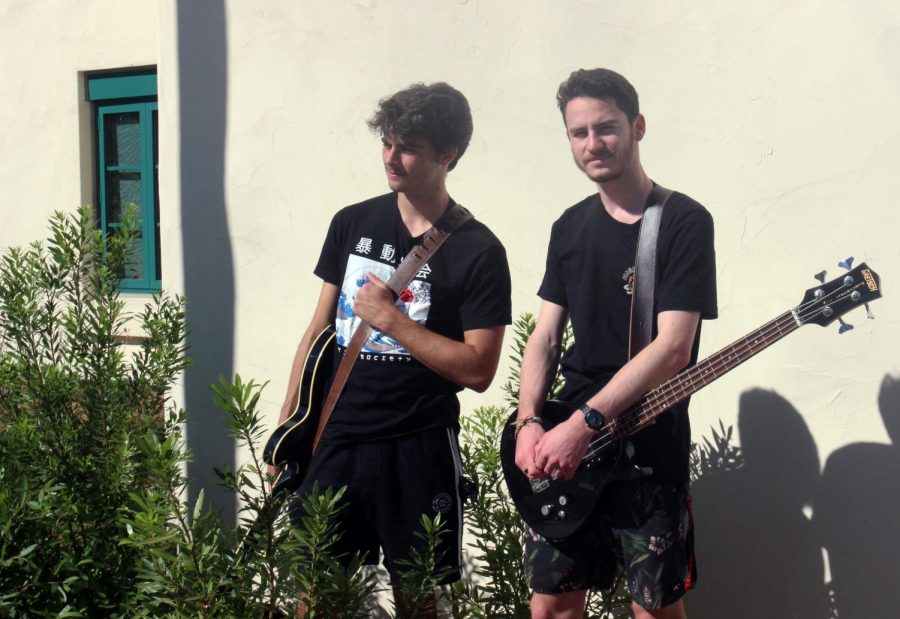 Max Conahey, left, plays rhythm guitar with his friend Nate Williams, right, who is the vocalist and bass player.

Outside the Frame, a punk rock band made of San Diego State students, won the first Open Mic Night and is in the running to perform for at Battle of the Bands in December.

With their fusion of modern punk and hard rock music, music freshman Nate Williams and computer science freshman Max Conahey won over the judges, though Conahey wasn’t even aware they were being judged.

But this didn’t keep the group from giving their all. Williams’s strumming hand even started bleeding midway through the performance.

Williams and Conahey have been officially known as Outside the Frame for about a year. They got their name from a song lyric from one of their favorite bands, Queens of the Stoneage.

They’ve known each other and played music together since they were in seventh grade, Williams said. Conahey plays guitar and Williams is the main vocalist and bassist. Williams also knows how to play the piano, guitar and drums.

“To us, Outside the Frame literally means what the camera doesn’t see, and for me, it’s what isn’t mainstream or what’s focused on,” Williams said.

Conahey said the name allows them to exist in their own world of musical rules.

“It’s like a strike back at what’s normal,” Conahey said. “We run by our own rules, basically.”

Their original music is heavily inspired by their experiences with love, high school and mental health, Williams said.

Mechanical engineer freshman Mason Greer has been a long-time Outside the Frame supporter, as a friend who has supported the band even before they were formed.

“Well, I have been friends with both Max and Nate for years,” Greer said. “Both of them are super talented and they’ve always worked together pretty well so I knew the music they would create would be awesome. Their first few songs proved me right.”

The two are currently looking for a drummer to play with them since their original drummer went to another college.

Williams and Conahey both said they enjoy the camaraderie that comes with being in a band together and are fully committed to their music.

Many of their supporters include friends and family. Most notable is John Williams, Nate’s dad, who is an SDSU alumnus and was also in a band in college.

“Obviously, when your kid is in a band, you want to support them,” Williams said. “They’re really accomplished for their age. Nate has a really unique voice and their sound is almost fully formed at such a young age.”

John notes how many of his favorite bands, like Nirvana, influenced some of Nate and Conahey’s favorite bands like Queens of the Stoneage and Royal Blood.

Their EP “Outside the Frame-single” is available on Spotify, Soundcloud, ITunes, Apple Music and more.

For more information about Outside the Frame, visit their Instagram page @outsidetheframeca.