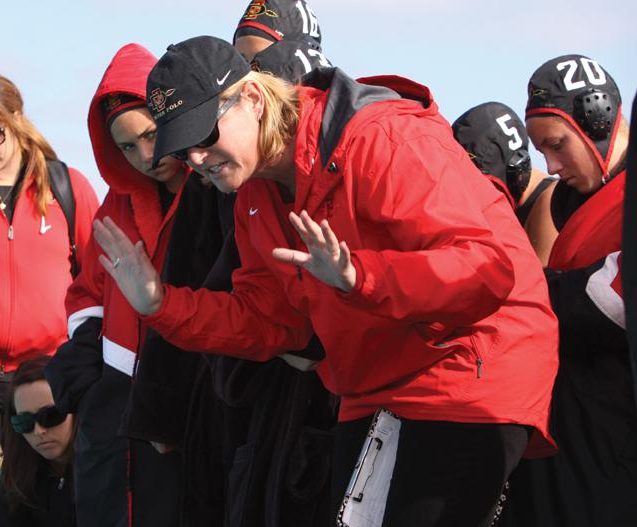 Head coach Carin Crawford speaks to her team in a game during the 2011 season.

San Diego State water polo has seen some changes to its program this offseason.

“Even though we’re not in 20-hour practices yet, it’s going really well so far with a lot of new faces and new energy,” head coach Carin Crawford said.

One of the new faces on the team is an assistant coach.

Dana Ochsner, who is from nearby Oceanside, Calif., was named assistant in September.

“We have a lot of new changes starting with my new assistant coach, Dana Ochsner,” Crawford said. “She’s brought a lot of good energy, new ideas and good excitement to the team.”

In addition to a new coach, Crawford added some pieces via new recruits from the high school and transfer market, including three true freshmen and three transfers.

One of those transfers is junior goalie Hannah McCarley, who is elevating the competition for the other goalkeepers.

“I think we will be a little tougher to score on, especially in those outnumbered attack situations,” Crawford said. “Our young goalie group has grown up a little bit. They have taken a lot more shots up and I think Hannah McCarley as the experienced, community college transfer has stepped up the level of competition and play.”

Another player who has elevated their game is junior defender Lucia Carballo.

Crawford said Carballo played attacker as a member of the Mexican international team.

“(Carballo’s) role on our team is defender and she’s done that really, really well,” Crawford said. “But her summer with team Mexico helped her develop as an offensive threat. She was in there as an attacker. It was the best possible training she could have received in terms of bringing that skill set back to our team.”

Carballo’s transition gives Crawford thought to play her alongside senior defender Casia Morrison instead of playing them at different times.

“(Carballo) and Casia have been my two senior defenders and they’ve never been in it at the same time,” Crawford said. “With (Carballo’s) experience on defense, I know I could trust her on that side of the ball. She’s speedy and if she’s willing to attack, she’s definitely a good option.”

Carballo and Morrison are just two of 13 upperclassmen on the roster.

Crawford said having a baker’s dozen worth of juniors and seniors gives the team maturity and confidence from the elder statesmen.

“When I see a player like Casia and (senior utility) Isabelle Hastings, the experience and knowledge and the skill of the seniors is excellent,” she said. “It really shows that if you put in the time, you stay the course and you don’t give up, your time will come.”

Hastings, who is from San Diego, was a role player for her first three seasons as an Aztec.

But Crawford said she has an opportunity to explode in year four.

“I really see Hastings having a breakout season and she’s pretty much been a role player for three years,” Crawford said. “Putting in the time and the experience she’s gained over the past three seasons is almost unofficially going to have her better prepared than a freshman coming in that doesn’t have that experience.”