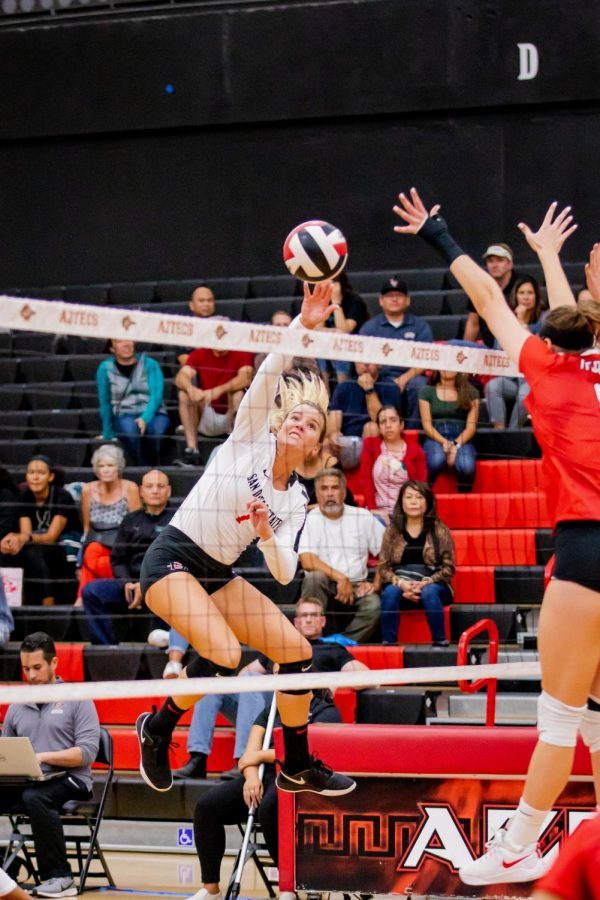 Senior outside hitter Hannah Turnlund goes for one of her team-high 15 kills during the Aztecs' 3-1 loss against UNLV on Oct. 3 at Peterson Gym.

During the final game of the four-game road trip, San Diego State women’s volleyball senior outside hitter Hannah Turnlund made history by recording her 1000th career kill in a five-set loss to Air Force on Oct. 19 in Fort Collins, Colorado.

Entering the match against the Falcons, Turnlund only needed six kills to reach quadruple digits.

Turnlund said reaching the mark gave her the opportunity to think about all the players who have led her to achieving that accomplishment.

“It was really exciting,” Turnlund said. “(It is) crazy to think about all of my teammates I have played with to get those kills and all the memories it has brought.”

One of her teammates that has seen all of them is senior middle blocker Tamia Reeves.

Reeves said she has enjoyed every moment and has noticed Turnlund’s growth since they have been together at SDSU since their freshman season.

“I’ve played with her every year,” Reeves said. “She’s a star. She knows what she’s doing and she knows how to put the ball in and it shows. She’s on her 1000th kill and I’m really proud of her accomplishment.”

Both Reeves and Aztecs’ head coach Deitre Collins-Parker have noticed Turnlund’s growth in the past four years.

Collins-Parker said she was proud when she got the word of Turnlund’s feat.

“I was glad to hear she got that mark,” Collins-Parker said. “She has gone hard for us for four years. So it’s good for her to reach that 1000th kill.”

On Thursday night against Boise State, Turnlund recorded game-highs with 21 kills and 21.5 points scored to go along with seven digs and a block.

The 21 kills against Boise State Thursday and another 14 on Saturday against Utah State brings her total to 1,040 kills and with eight games left, she has a chance to increase that number even more.

Collins-Parker said Turnlund’s performance against the Broncos, proved why she’s earned that historic feat of 1,000 kills.

“I thought how she played (Thursday night) was really indicative of what Hannah is able to do.” she said. “She had a few errors early and a couple of shots blocked on her, but I thought she really hit very aggressively.”

Looking back on four years when Turnlund was a freshman, she was only an outside hitter and could only hit.

Now, Turnlund is about ready to finish her fourth and final collegiate season and Collins-Parker said she has been able to see her grow her game to not just hit, but to serve, play back row and block.

“You have to have an outside (hitter) that can do those things,” Collins-Parker said. “She’s been important to us that way. She’s also one of the best blockers we have, just solo blocking. She has always worked hard to improve every area of her game.”

Turnlund has recorded at least one block assists (or solo block) in seven consecutive matches.

The Aztecs now go on the road to take on the Lobos in Albuquerque, N.M. on Halloween and finish the weekend on Nov. 2 in Las Vegas when they face UNLV.