College Republicans lean into right-wing rebrand in return to campus 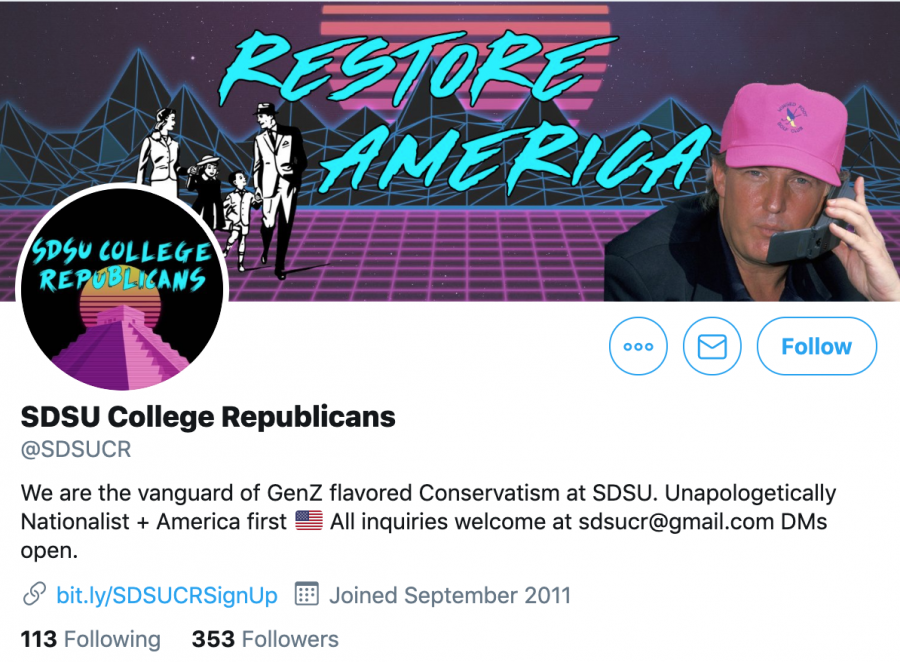 A screenshot of the College Republicans Twitter page, a key part of the organization's rebrand.

by Bella Ross and Brenden Tuccinardi

After a rough start to the calendar year, the San Diego State College Republicans are looking to make a comeback on campus.

But the organization’s return to campus didn’t come without a major rebrand. SDSU College Republicans President Oliver Krvaric said, ideologically, their ideas probably land far from your grandma’s vision of republicanism. Krvaric said he rejects the “lukewarm” conservatism of the baby boomer generation in exchange for a new, more controversial approach.

Krvaric went on to say, “We definitely have, ideologically, shifted right.”

The club’s new identity can be somewhat understood through it’s latest Twitter activity, breaking a months-long social media hiatus with a slew of tweets, a new layout and a bio that describes the club as “the vanguard of GenZ flavored Conservatism at SDSU.” The organization even shed it’s former elephant profile photo – the “mascot” of the Republican party – for an 80s-themed, meme-inspired appearance.

“Come on, the elephant? Whatever,” Krvaric said. “That’s so boomer, you know?”

The College Republicans returned to the platform in mid-October, and it’s tweets point toward the emphasis on controversy Krvaric preached.

On Oct. 14, the organization wished its followers a “very happy Columbus Day,” going on to say “We wouldn’t be here without the uniquely European thirst for exploration that brought (Columbus) to the shores of the Caribbean over 500 years ago.”

We’d like to wish everyone a very happy Columbus Day. We wouldn’t be here without the uniquely European thirst for exploration that brought him to the shores of the Caribbean over 500 years ago. pic.twitter.com/E0R3Ko6KgQ

This comes amid growing controversy over the validity of Columbus Day as a holiday from those who reject the United States’ imperialist history. SDSU’s academic calendar even lacks reference to the holiday, instead referring to Oct. 14 as Indigenious Peoples’ Day.

The account also features multiple interactions – in the form of retweets, likes and follows – with figures and organizations that have a history of being associated with white nationalism.

Krvaric said the club’s interaction with the website on Twitter is largely from an “anti-interventionist” perspective, and that he was not fully aware of the website’s platform. But one post on the club’s Twitter deflects from Krvaric’s claim, quoting a tweet from Vdare about immigation, proclaiming in response that the U.S. needs to “end the failed War on Drugs and build the wall.”

In case you needed any more reasons to end the failed War on Drugs and BUILD the WALL. https://t.co/K6qDl6aeyU

But Krvaric asserts that any association of the College Republicans with white nationalist ideologies would be grossly incorrect.

“That perception is one that would not be healthy for our club, but it’s also unwanted, completely rejected and disavowed entirely, I would say,” Krvaric said.

Krvaric’s involvement on campus is not limited to the College Republicans. He is also the vice president of SDSU’s Turning Point USA chapter, a non-partisan organization that he said promotes free markets and fiscal conservatism.

He is also the son of San Diego County’s longtime Republican Party Chairman Tony Krvaric, but he said his father’s views do not always reflect his own.

“I deviate from him in some of our priorities for sure,” he said.

TROUBLE IN THE SPRING

The last tweet to appear on the organization’s account before this October was made more than five months ago on April 2, marking the start of a temporary hiatus for the club. The quiet period was sparked as a result of conflict between SDSU’s College Republicans chapter and the state organization early this year.

At the beginning of 2019, the SDSU College Republicans were at risk of losing their official, recognized status in the California College Republicans. That was until the club, along with nine other campus chapters, voted to disaffiliate from CCR in January voluntarily.

The drama, sparked by a Dec. 23 ruling by then-Associate Justice of the CCR judicial board Matthew Vitale, revolved around a private conversation between former SDSU College Republicans President Madison Marks-Noble and former CCR Chairwoman Ariana Rowlands, in which Rowlands referred to Chico State Republicans President Sarah Morcott as a “bitch.”

Marks-Noble shared a screenshot of her and Rowlands’ conversation with Morcott, which according to Vitale’s ruling, violated CCR bylaws prohibiting “unauthorized, public disclosure of personal communications” in conversations over social media or within group chats. The decision resulted in the CCR judicial board rescinding Marks-Nobles and Rowlands’ good-standing with the organization. It required that to maintain recognized status, SDSU College Republicans had to elect a new president or restructure the clubs governing documents under new leadership.

Marks-Noble stayed on as chapter president. On Jan. 24, SDSU College Republicans broke away from CCR, saying, in a joint press release issued by the 10 disaffiliated chapters, that CCR was a “defunct organization,” and the decision to leave was prompted by lost faith in state-wide leadership.

CCR issued a press release decrying the dissociation of the ten chapters as a “failed attempt to seize power.”

Now, with a new executive board and as a chapter of the recently formed California Federation of College Republicans, the SDSU College Republicans are looking to move on from the scandal and get back to work, External Vice President and political science junior David Beck said.

“We are a new executive board, so we have a different approach to certain controversial things that have happened in the past,” Beck said. “But we also want to be outspoken about what we believe in.”

Right now, the club is seeking members, particularly SDSU students looking to get involved in conservative politics, Beck said. A primary goal of SDSU College Republicans is registering voters in the fall and volunteering with Republican campaigns, something Beck said they are looking forward to in 2020.

“One of our goals for the club is to make sure members are competitive when they’re applying to political jobs,” Beck said.

One way the College Republicans achieve this is by maintaining close relationships with the county and state-wide party apparatus. Through these connections, Beck said, the club can provide members with networking and volunteer opportunities as well as access to internships working with local candidates.

Until election season, however, SDSU College Republicans are planning on leading the campus conversation around academic freedom, free speech and equal representation, Krvaric said. He plans on turning the club’s focus towards being a loud, alternative voice in the campus “culture wars.”

“You’ll have some (executive boards) that are very interested in canvassing for local candidates, phone banking, volunteering and trying to get candidates elected,” Krvaric said. “I’m trying to take it in a different turn, where I’m trying to involve the College Republicans more towards, I suppose, the culture war side of things.”

He said, in many ways, this “culture war” is one between “the right and the right,” as he said the club’s main focus is on shifting the needle away from the conservatism of Reagan and Bush eras.

But despite Krvaric’s focus on controversy and “culture wars,” he said he’d like to have a good relationship with other political student organizations on campus.

In the spring, he said the club is planning to bring a prominent conservative speaker to campus, though he would not say whom.

In October 2017, SDSU College Republicans were slated to host the controversial conservative commentator Milo Yiannopolous on campus. However, the university canceled the event due to increased security costs and logistical challenges.

Yet, Krvaric expressed optimism that this spring’s event will be less controversial.

“The nature of any events we have in spring will be focused on conversations and the more uncomfortable narratives,” Krvaric said. “It’s about pushing the boundaries of what is considered acceptable speech on campus. So I wouldn’t say that hints toward extremism in any way.”

Students looking to be involved in local politics and network with other Republicans are invited to join SDSU College Republicans at their next meeting on Oct. 30 at 7:30 p.m. in the Pride Suite. The club will meet every other Wednesday at this time starting Oct. 30.

Editor’s Note: Oliver Krvaric works for The Daily Aztec as a staff writer for the newspaper’s opinion section.