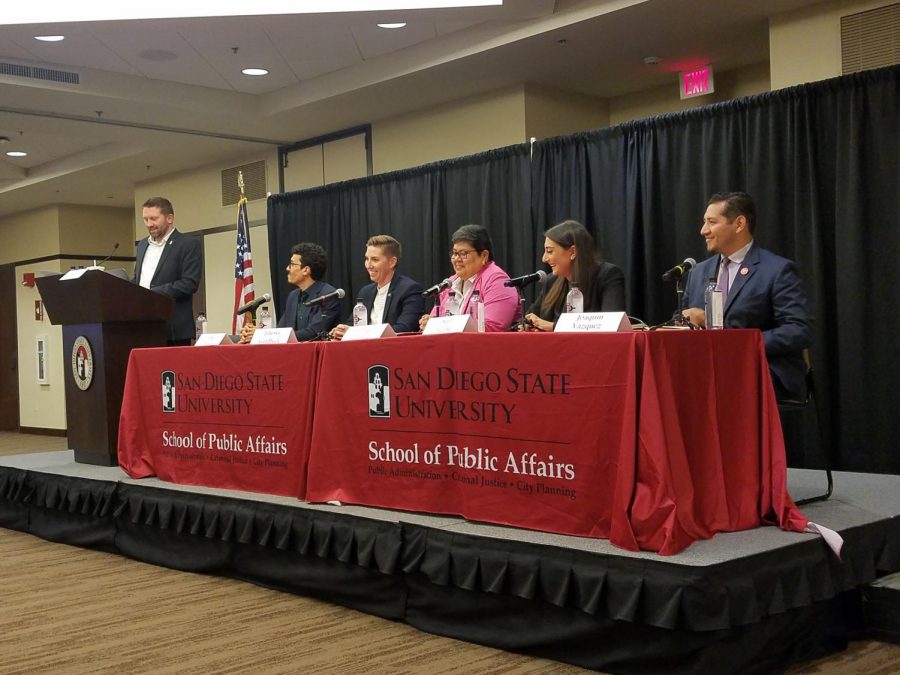 This allowed the candidates to weigh in on issues related to foreign policy and national security. The candidates also made their case for being the best choice to replace Susan Davis, who has held the district’s seat since 2001 but will not seek re-election.

“When we first founded Truman San Diego, one of the things we wanted to do was big candidate forums like this,” he said. “We’re really excited because national security is so important to the region, and Susan Davis is currently the only member of the House and Service Members committee in our delegation.”

Those who participated in the forum included Jose Caballero, Janessa Goldbeck, Sara Jacobs, Joaquin Vazquez and Georgette Gomez. Caballero and Goldbeck are both veterans, Jacobs and Vazquez previously worked with the Obama administration on policy and Gomez is currently serving as San Diego City Council president.

The topics ranged from the military intelligence in San Diego, relationships with foreign governments, trade negotiations, artificial intelligence, China, the United States’ role in the Middle East and climate change and its impact on national security.

Jacobs said that approaching this at a local and national level would be the most effective.

“I think it’s important to note that climate change is the perfect example of the kinds of challenges that we’re going to be facing, that no one country can solve alone and that we have to have an international coalition to be able to solve,” Jacobs said. “I also think we know, and we’ve seen conflicts will rise with climate change. We have desertification, drought, and we know that climate refugees are already happening.”

When asked about last year’s operation to send military forces to the border, each candidate said that militarizing the border was not the most effective solution towards immigration.

“That should never be a place that we put our troops,” Goldbeck said. “Congress should be the one who declares when and where we use military force.”

Caballero said it was a missed opportunity of what could have been a chance to hire administrators to handle migrants making their way through the border.

“We don’t need to militarize; we need to bring more people with pens and paper,” he said. “I want to see more open arms than a fist to the face because that’s what the migrants are currently facing right now.”

Nicole Gold is one of the district’s constituents who attended the forum to hear what each candidate had to say about issues directly affecting the local communities.

“This is San Diego, so our more immediate one is the border,” Gold said. “I’m interested in seeing people’s different takes and ideas on whether it’s driven by national security, humanitarian (efforts) or both.”

Voters of the 53rd Congressional District will have the opportunity to vote for their choice of candidate in the primary election on March 3, 2020, and then again in the general election on Nov. 8, 2020.