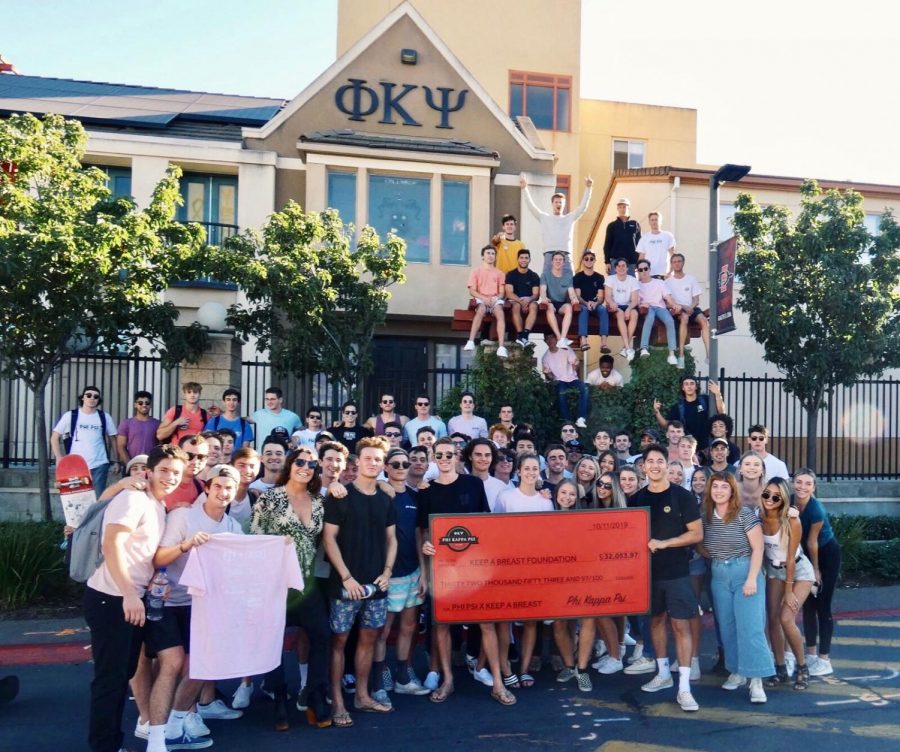 Phi Kappa Psi’s San Diego State chapter has broken the record for most money raised by a Greek organization on campus.

In their breast cancer philanthropy event in October, the fraternity raised $32,053.97 dollars with 100% of the proceeds going to the Keep a Breast Foundation, according to  Philanthropy Chair and marketing senior Jeff Peroutka.

The idea for this event was something Peroutka said he had envisioned for a long time,  and that he was super happy to do it before he graduated. The event’s focus on breast cancer hits home for Peroutka and other members of the fraternity who had been personally affected by the disease.

“It was kind of an issue that was really resonating with me and with a lot of people in the house,” Peroutka said. “I mean, Breast Cancer Awareness Month was such a big month and kind of what we really wanted to do was we wanted to make a huge statement at SDSU, kind of for Greek life as a whole, and say this is what’s possible.”

The fraternity began the fundraiser on Oct. 1 by selling shirts and bracelets promoting breast cancer awareness and reaching out to various businesses for sponsorship. Business management sophomore and Phi Kappa Psi member Evan Ferguson helped with the organizational aspects of the event.

“(Epic Wings) ended up donating a bunch of food to us and we had a fundraiser for it where we sold tickets, and Shake Smart too, they offered us 10% of all the proceeds if anyone mentioned our events for the whole week,” he said.

Alpha Phi won, but was not able to participate in the event because the chapter is not allowed to participate in social events with the fraternity as it is under investigation, Chapter President Max Kyle said.

On Oct. 11, Phi Kappa Psi finalized the fundraising with an event with a performance by deejays, Walker & Royce. In their house, they encouraged members to make final donations through Venmo. Kyle said they raised a couple hundred dollars that night alone.

As a fraternity on interim suspension, Phi Kappa Psi faced opposition to them holding this event. Kyle said he received emails from both the interfraternity council and university advising to cancel the event because they were doubtful about the fraternities’ true intentions.

“I have a lot of meetings with a lot of people and usually those meetings go something like, ‘Oh, you guys are guilty, we know what you guys are, what your plans are, we know what your intentions are. It’s always the same with all of you,’” he said. “And I think with this, even going into this philanthropy, a lot of people were telling us ‘Yeah, good luck with that record. Good luck.’”

But, in the end, he said the chapter was able to pull through and exceed its fundraising goal.

Peroutka said he hopes this event inspires others to follow.

“I hope that other houses at SDSU continue to raise the standard and try to raise a lot of money,” he said. “I hope that there’s a lot of positive light shined on the entire Greek system as a whole for years to come.”