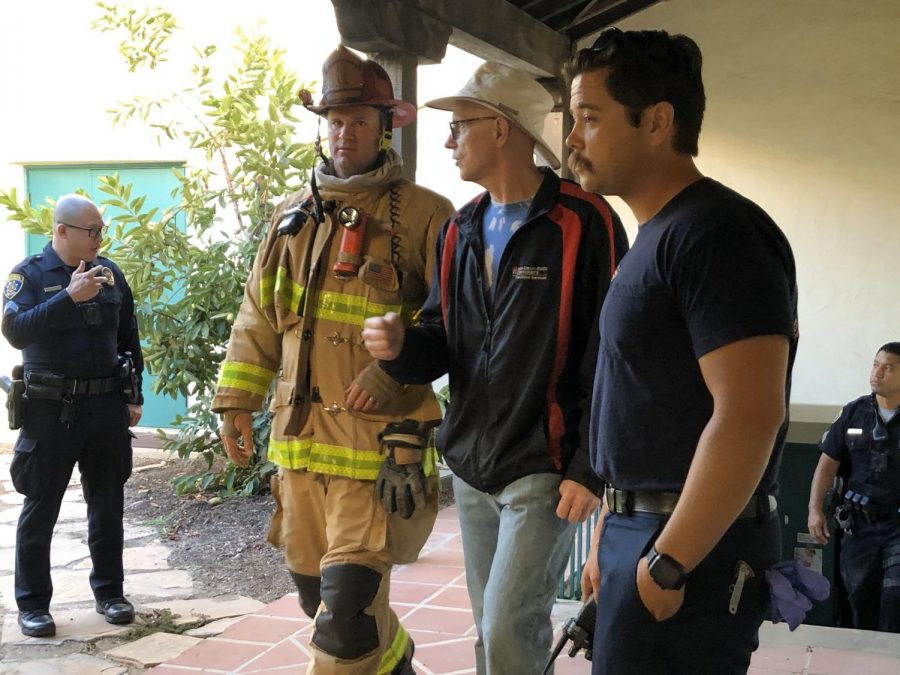 Campus officials investigate flooding in the basement of the Physical Sciences building, which they referred to as the cause of a power outage in five buildings on Oct. 31.

Students, faculty and staff were left wondering if they were caught in the middle of a Halloween prank after several San Diego State campus buildings lost power on Oct. 31 at around 3:15 p.m.

East Commons, Hepner Hall, Administration, the Faculty Staff Club and Physical Sciences went dark after a generator in the basement of Physical Sciences was damaged by flooding, according to an alert posted by the university as well as several Facilities Services personnel at the scene. Power was restored to all but one of the impacted buildings by 5:30 p.m.

Physical Sciences remains closed and according to the university, students with classes in the building will be notified about future cancellations or relocations.

The flooding and subsequent power outages posed no health or safety threats to campus and no injuries were reported, university police spokesperson Raquel Herriott said.

Facilities Services worked quickly to restore power, however, the outage did create a minor inconvenience for students hoping to grab a bite to eat at East Commons.

Minutes after the power went out SDSU Dining Services employee Sonia Maldonado was outside the Aztec Market located at East Commons turning students away who were both confused and disappointed.

She said she was in the break room with a coworker when the power went out in the building and initially joked about the spookiness of the situation.

“(The power) flickered off and I was like ‘Ooh, it’s Halloween’ and the next thing you know it went completely dark,” Maldonado said.

The cause of the flooding in Physical Sciences is still unknown and there is no word as to when all power will be restored.

UPDATE: Power to the Physical Sciences building was fully restored Nov. 1 at 2:12 p.m., according to a tweet from the university. Classes will resume as scheduled.