Student athletes should not get paid by their schools 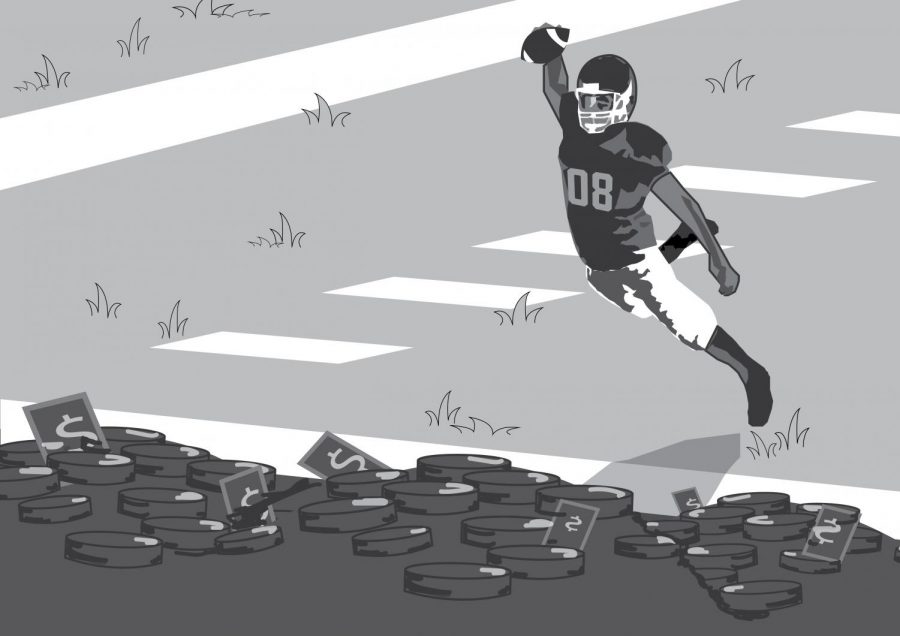 Tensions between the tuition-paying student body and full-ride scholarship athletes have always been an area of conflict at large public universities. It’s the age-old argument of students being disgruntled that others enjoy the luxuries they pay so much for, but free of charge.

This tension is furthered with the recent passing of Governor Gavin Newsom’s Fair Pay to Play Act which allows student athletes to use their own name, image and likeness in advertising and endorsement deals, so long as these endorsements do not conflict with the sponsorships of the university.

Despite the steps being taken currently, many argue that more legislation needs to be passed to guarantee ample compensation for student athletes. In other words, student athletes want to cash in on signing bonuses and big figure contracts.

However, I believe Gavin Newsom’s Fair Pay to Play Act is actually a step in the wrong direction and that more attention and focus should be given toward the already existing system of collegiate athletics before the floodgates of high-dollar spending are opened any wider.

Newsom’s new legislation furthers the divide between star players and athletes that receive little playing time. For the most part, only the star players on collegiate level teams receive scholarships that cover the entirety of their tuition. The rest of the players are held to the same expectations of work ethic of balancing classes and practices and showing up for games they’ll inevitably be parked on the bench for, yet they are not rewarded for their efforts equally in any regard. If amateur athletes started garnering expensive contracts, it would only widen the divide that pits young adults against each other for the benefit of others’ entertainment.

I will concede it is understandable that athletes should be able to profit off of their own likeness for endorsement deals and sponsorships, as outlined in Newsom’s Fair Pay to Play Act. Young athletes spend their whole lives cultivating their talents and skills, and should be allowed to take offers from interested external companies that reach out to them. For universities to explicitly prevent their athletes from thriving in any way possible, especially in a way that takes no funding out of the schools, is simply robbery.

However, to say universities should be responsible for paying their athletes with money that will undoubtedly be taken from academic budgets is ludicrous.

Before demanding contracts from universities, and even before the brand deals, there should be a commitment to the longevity of all student athletes, not just the ones who are already talented enough to make it professionally. It is a well known statistic that fewer than 2% of NCAA athletes actually end up playing their sport professionally. For the 98% of student athletes who are not skilled enough to go pro, the reality is that collegiate athletics are simply a tool for better financial standing and economic freedom, just like any other student.

Newsom’s Fair Pay to Play Act does nothing to help this group of students. All of the critiques of the NCAA that were held by professional players like Lebron James still exist after the passing of this legislation. In addition to the blatant disregard for the quality of their education, these students still face the potential revocation of scholarships for poor performance on the field. We are left with legislation that seems more focused on providing companies with another outlet of advertising than policies that actually aim to help student athletes lead successful lives.

What it ultimately boils down to is the transition of college athletics being driven primarily by the passion of the players to something that is now commercialized for American consumers.

Athletic programs and coaches across the nation face steep pressure to win games, leagues and championships. This pressure accumulates rapidly, and coaches who do not lead their teams to victories are let go at the drop of a hat. This results in coaches spending every dollar in their possession on the recruitment of future prospects.

Take the University of Kansas, for instance. Although they are only ranked 15th on the list of highest-spending football programs in the nation, they still managed to spend $1,141,379 in the 2018 fiscal year on recruiting alone. Instead of applying these funds to the mere recruitment of star players, they could have been used to give more scholarships to players on the team who have not yet received them.

While California Governor Gavin Newsom’s Fair Pay to Play Act aims to support student athletes with ulterior modes of income, it ultimately works to support the already-occurring transition of collegiate athletics being financially driven. The focus should really be on how to improve the lives of all student athletes, not just the ones with enough popularity to get a large paycheck. Universities need to provide athletes with programs and resources that will be beneficial to them throughout their lives and support the 98%.