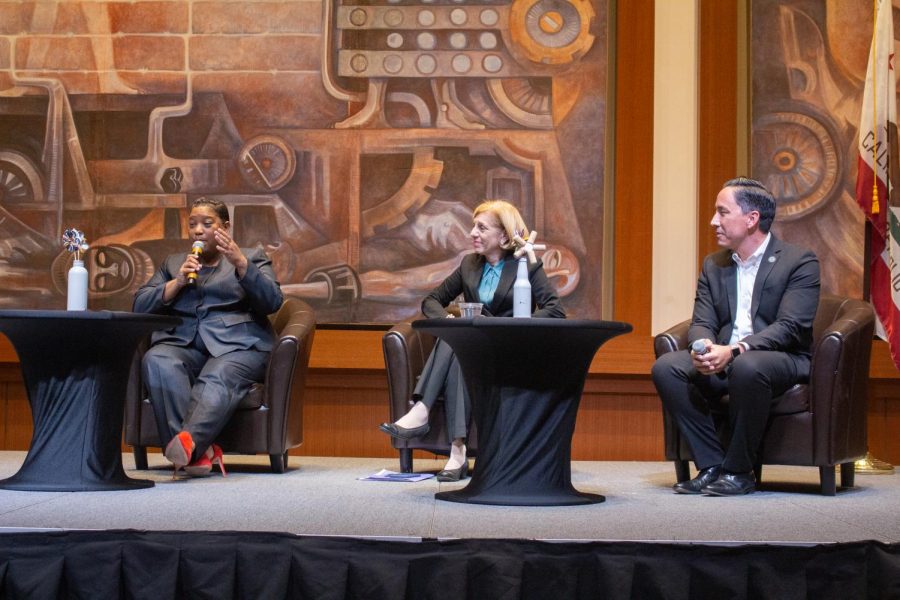 Students were given the opportunity to ask questions at the open forum in Montezuma Hall.

Candidates Todd Gloria, Barbara Bry and Tasha Williamson discussed issues with the community that will impact San Diego as a whole as well as students at SDSU.

With the growing epidemic of homelessness and in the wake of a housing crisis, each candidate was asked how they plan on protecting student renters. Barbara Bry said short-term vacation rentals largely contribute issues with finding housing.

“There are 16,000 single-family homes plus untold numbers of apartments that are being used as hotel rooms in this city that are not available for San Diegans to live in,” Bry said. “That has a link to why we don’t have enough housing in the city.”

Bry also pointed to the lack of enforcement of municipal codes as the cause of this problem.

Gloria, current California Assemblymember and House Majority Whip, blamed the developers and the prioritization of luxury apartments over affordable housing.

“When you look at what’s being produced like modern luxury apartments and the tall towers downtown that investors and other folks live in, I’m not interested in building more of that,” Gloria said. “I’m interested in giving homes that working people and students can afford to live in.”

Williamson acknowledged the generational trend of homelessness and the lack of action from City Hall in actively addressing community members.

“The city council has not regulated things they way it should have,” Williamson said. “They are community members and we should be loving them and supporting them and giving them everything they need.”

Concerns were raised over improving traffic conditions and increasing mass transit options in San Diego. Without placing the burden on taxpayers, the debate looked at how each candidate would ensure these conditions are actually improved.

Bry emphasized the new development of the trolley’s blue line which will connect La Jolla to downtown San Diego.

“We have to first prove we can get people to use transit,” she said. “Otherwise, we’re never going to be successful again at getting a tax measure to pay for the kind of transit we’re going to need in the future.”

Gloria, who has previously supported measures focused on mass transportation, said the mayor should have control when it comes to resolving local transportation issues.He said San Diego needs a better presence in the state capitol.

“To make sure we’re doing what we need to do, which is to make transit work in this community,” Gloria said. “We need to give walking and biking opportunities and make the buses and trolleys come more frequently, and that fares are not raising constantly.”

Williamson said her focus is on improving the safety of citizens taking mass transit and the urgency of making changes immediately.

SDSU recently submitted a new proposal to purchase the Mission Valley land and begin an expansion project, which will be reviewed on Nov. 18 by San Diego City Council. The candidates discussed the concerns over the project’s sustainability plan, as well as how to prevent any more issues from halting the completion of the project.

Williamson said it was important to have community involvement with this project.

“We need to sit at that table and make sure there’s transparency, and we have everything you guys (SDSU) need in order to develop it,” Williamson said. “This is your canvas. I want to make sure that we bring people to the table and we allow you all the opportunity to create what you envision.”

Gloria said the campus expansion would not fall onto the list of uncompleted projects, like the long-discussed expansion to the San Diego Convention Center.

“We can’t allow this project to become like so many other projects in town that never get done,” Gloria said. “If elected mayor, I promise you I will get things done. SDSU West has to be the top of that priority list.”

Bry, a longtime supporter of the SDSU Mission Valley development, said, if elected mayor, she will make San Diego a place for graduates to stay long term.

“My goal is that all of you graduate and stay in San Diego,” she said. “If you’re going to stay here, you need a good job and an affordable place to live. You are our future. We need you here desperately.”

SDSU made a new offer of over $86 million to the city of San Diego on Oct. 28. The university hopes to own the land in March 2020 and begin construction on the site which would include a new stadium, a public park and affordable housing.