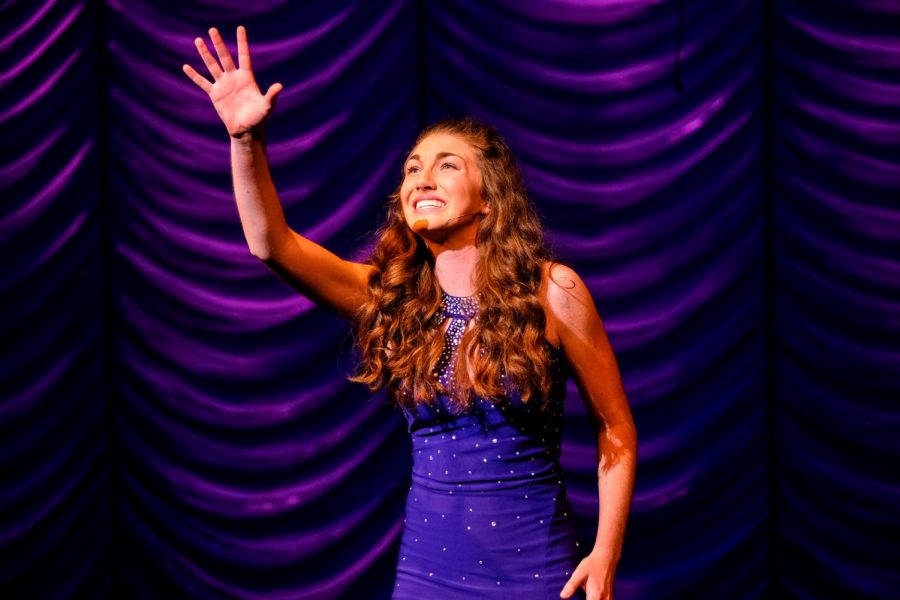 Vadeboncoeur performing onstage in her element.

Even though Vadeboncoeur grew up singing in her church choir and dreamed of being a country singer, her life changed after discovering theater.

“I caught the theatre bug when I performed in my first production in 3rd grade,” Vadeboncoeur said. “It was an elementary school production of ‘Seussical Jr.’ and I was cast as Gertrude. From that point forward, if I was not involved in a show in some way, I frankly didn’t know what to do with myself.”

Vadeboncoeur said there are many special people who have encouraged her to pursue theatre at a higher level. She now attendsSDSU for musical theatre and auditions for major roles. Her high school theatre teacher and musical director showed her a career in theatre was possible.

“They convinced me to audition for ‘Les Mis,’ a musical I was not very fond of at the time,” she said. “I am so thankful they did, because that musical changed my life.”

Vadeboncoeur played the role of Eponine, which soon became one of her all time favorite roles. Because of her portrayal of the character, she was awarded first place at the Broadway San Diego Awards, a local award show for high school theatre students.

Her performance in “Les Miserables” also brought her the incredible connection with West End Actor Dean Chisnall who played Jean Valjean in the London production of the play.

“Chisnall has become the best mentor I could have ever asked for and has inspired me in more ways than I could ever explain,” Vadeboncoeur said.

As co-winner of the Broadway San Diego Awards, Vadeboncouer had the opportunity to travel to New York City to compete in the Jimmy Awards.

“Getting to stay in New York with 85 other passionate performers, work with Broadway professionals and perform on a Broadway stage was nothing short of amazing,” Vadeboncouer said. “I can easily say that was the most inspirational, humbling and career affirming experience of my life.”

Since the awards, Vadeboncoeur has been performing in the youth theatre premier of “Matilda” as Mrs. Wormwood.

“At first I was intimidated to be in a show with all these incredibly talented and well trained upperclassmen and graduate students, but everyone has been so loving and supportive that I feel right at home,” Vadeboncoeur said.

Soon, Vadeboncoeur will have her first professional Broadway theatre audition for the national tour of “Dear Evan Hansen.” While she is unsure if she will be cast, or even receive a call back, Vadeboncoeur is confident being seen by actual casting directors is an incomparable experience that will benefit her greatly.

Vadeboncoeur believes due to her experiences thus far, she can offer some valuable advice to those starting out or thinking of pursuing theatre.

“The best advice I can give is to be kind to every person you meet, don’t take rejection too personally and to never stop learning,” Vadeboncoeur said.