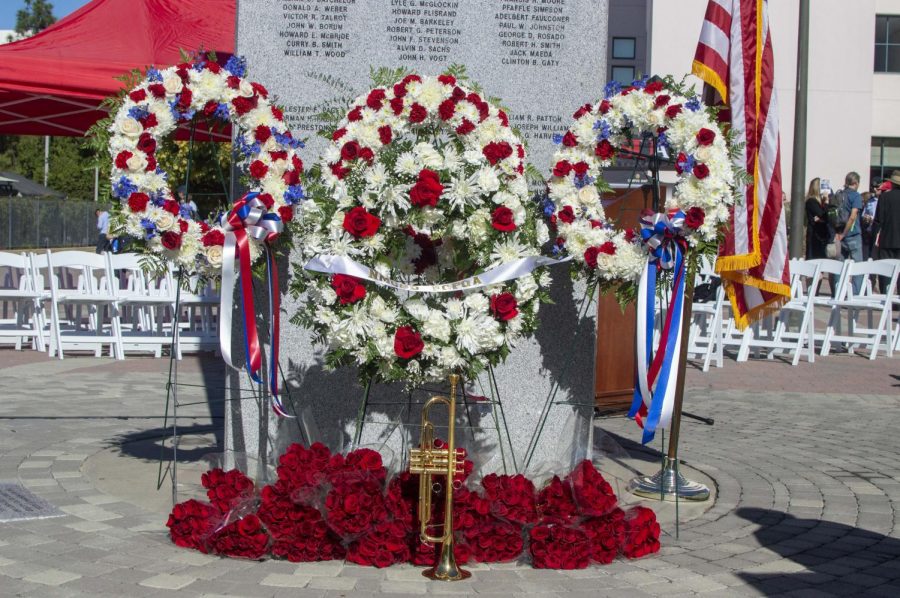 For many students making their way to class, the San Diego State War Memorial is nothing more than a towering chunk of stone etched with strangers’ names. However, on Friday, Nov. 8 the campus community came together to honor the sacrifice of over 200 lives lost to war by laying wreaths at the foot of the monument that looks over the Aztec Green.

SDSU President Adela de la Torre welcomed attendees and reaffirmed the university’s commitment to the success of its 4,000 military-connected students, highlighting several student veteran organizations and programs on campus. Some of these include the VetSuccess program and Student Veterans House, as well as the newly created USS Midway Endowed Chair in Modern U.S. Military History in the College of Arts and Letters.

The endowed chair is funded by a five-year, $3 million pledge to the university by the USS Midway Foundation, according to press release from the university.

McLaughlin emphasized the special relationship between the USS Midway Foundation and SDSU.

“We have begun a wonderful relationship with SDSU,” McLaughlin said. “We are very proud to make our first installment.”

De la Torre said  the war memorial is a strong symbol of the university’s commitment to military-connected students.

“This monument stands as an ever present reminder to them,” de la Torre said. “Your service is respected here. Your sacrifices are honored here. You are welcomed here.”

SDSU alumnus, Vietnam veteran and SDSU War Memorial Committee member Gilbert Harrison remembered his time at SDSU from 1966 to 1970 when military members and veterans were not respected on campus due to anti-war sentiments growing out of the United States’ involvement in Vietnam.

“There was not a lot of liking for the ROTC to be on campus,” Harrison said. “It was a different time.”

However, Harrison is glad to be able to return to campus and see the university community honor veterans and those in uniform.

“To see the gratitude that people have for those who serve, warms my heart,” he said. “We didn’t have that when I was serving.”

The ceremony ended with the wreath laying ceremony followed by members of the Student Veterans Organization reading the names of all 235 SDSU students who died while serving during World War II, Korea, Vietnam and Afghanistan and Iraq, and the playing of “Taps.”