Aztecs look to rebound in rivalry game against Fresno State 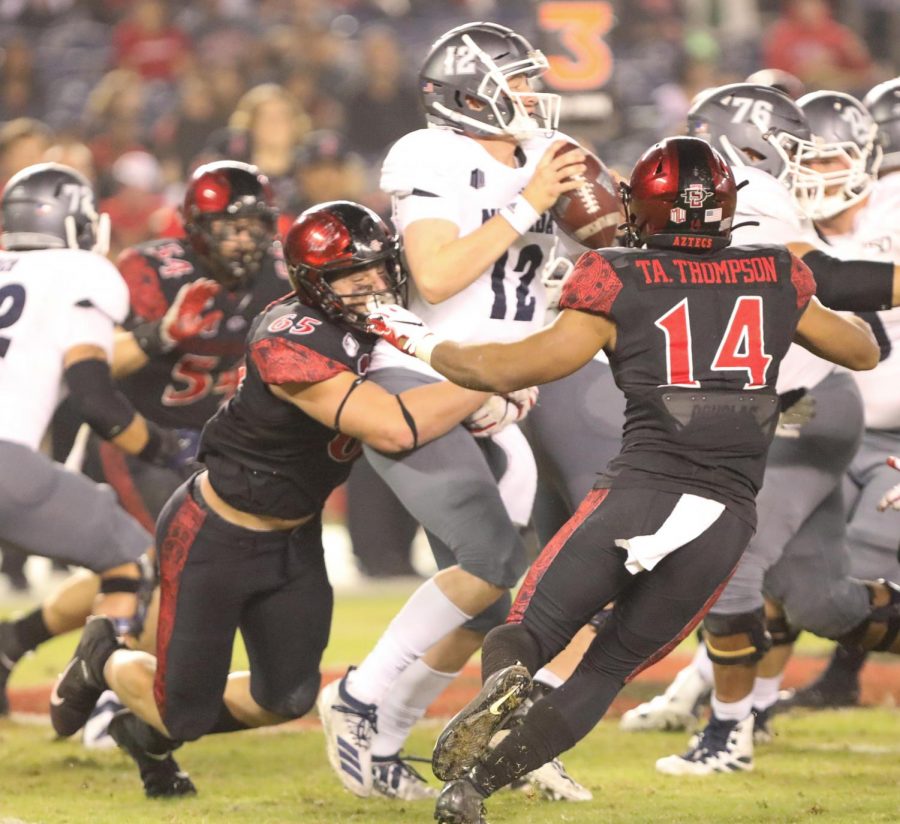 San Diego State football will battle Fresno State in the “Old Oil Can” rivalry tonight at SDCCU Stadium.SDSU currently holds the lead in the all-time record between these two teams at 29-25-4.The Aztecs (7-2, 4-2 Mountain West Conference) hope to rebound from a 17-13 loss suffered against Nevada last Saturday.Head coach Rocky Long said the team will give its all despite its recent performances.“Obviously, we’re frustrated and disappointed in the way we’ve played the last two games, but we’re not discouraged,” Long said. “We’re going to go out there and do what we always do. We’re going to play as hard as we can and see what happens.”Last weekend, the Bulldogs (4-5, 2-3) fell to Utah State in a 37-35 loss at home.Their three other losses came against Southern California, Minnesota in double overtime (the Golden Gophers are now the No. 8 team in the country) and Air Force.Fresno State lost key offensive talent this past offseason in quarterback Marcus McMaryion and wide receiver Keesean Johnson, but senior quarterback Jorge Reyna and sophomore wide receiver Zane Pope have stepped up to replace them.Reyna has 2,106 yards, 11 touchdowns and six interceptions in nine starts this season, while Pope is the Bulldogs’ leading receiver with 38 receptions for 397 yards and a touchdown.Defensive coordinator Zach Arnett expects the Bulldogs to give the Aztecs several different looks.“(Fresno State is) really balanced on offense,” Arnett said. “Very multiple between the different personnel groupings they give you … They’ll give you anything from empty to traditional 12-personnel sets and everything in between; give you a lot of shifts and motions.”What might be even more overwhelming is Fresno State’s backfield is highlighted by junior running back Ronnie Rivers. He has 126 carries for 655 yards and 11 touchdowns, as well as 24 receptions for 172 yards and two touchdowns.Arnett said the Bulldogs have experimented with different pieces in their offensive line throughout the season, but it will still be a challenge to stop them due to their efficiency (34.4 points per game average).“I think seven different offensive line combinations throughout the season because of injuries and I’m sure maybe some other reasons,” Arnett said. “Usually, when you’re changing your starting five up front almost every game, it’s tough to build some continuity. They’re moving the ball and scoring points … it’ll be a heck of a challenge in front of us on a shorter week.”

The Bulldogs’ ground attack facing the Aztecs’ run defense is a matchup to look forward to, as SDSU ranks second in the nation in rushing yards allowed per game (65.3) and eighth in points allowed per game (14.4).Senior linebacker Kyahva Tezino said the main goal on defense is to shut out the opposition.“This defense is amazing,” Tezino said. “We have to be able to hold our opponent to zero points. I feel like we can do that. As captain of the defense, I’m holding those guys accountable to that. This week I really think they’re taking to it.”

Last week, SDSU committed nine penalties – the second-most of any game this season.

The Aztecs are tied for 75th in the country with 6.44 penalties per contest.

The Scarlet and Black sit just behind Fresno State, who is tied for 69th in the nation with 6.33 penalties per game.

Although these numbers are similar, what stands out between these two teams is the turnover difference.SDSU has only turned the ball over five times this season compared to Fresno State’s 13 total turnovers.