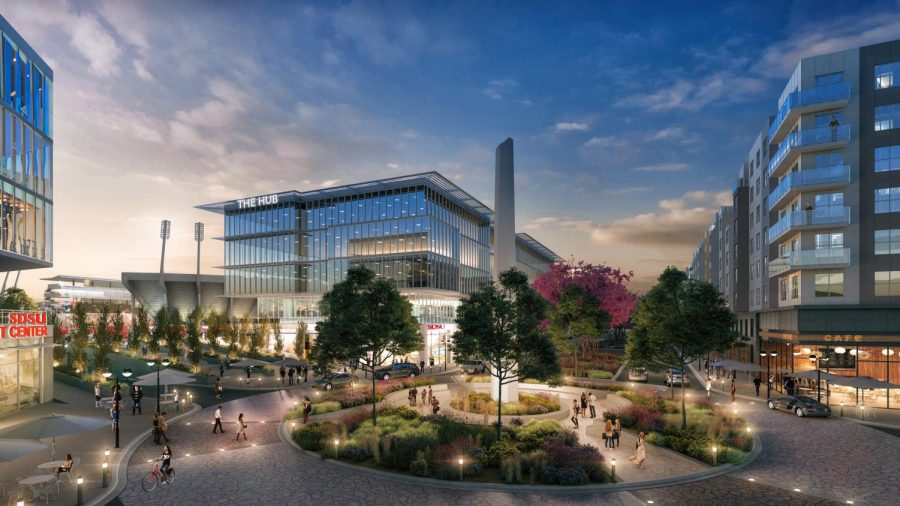 Rendering of The Hub, a portion of the planned Mission Valley campus expansion.

The negotiations between San Diego State and the City of San Diego over the university’s expansion plans in Mission Valley moved forward on Monday.

In a San Diego City Council meeting on Nov. 18, members voted to unanimously approve a requested council action to proceed with the process of drafting a purchase sale agreement document.

The office will be responsible for drafting and formatting the PSA and submitting the document to city staff for analysis.

At the meeting, SDSU also presented its revised offer of $86.2 million for 135 acres of land at the SDCCU Stadium site.

The parcel also includes Murphy Canyon Creek, land the university agreed to purchase from the city at the request of city officials.

At the meeting, SDSU President Adela de la Torre and JMI Realty’s John Kratzer, a member of the university’s negotiating team, discussed the details of its updated offer.

“We believe we are close to the finish line,” Kratzer said.

The university aims to present the finalized PSA, financing plan and EIR to The California State University Board of Trustees on Jan. 28, 2020. The university also hopes the city council will deliberate on a finalized agreement in February, with a closing date the following month.

The timeline for approval is in line with the university’s goal to open its new 35,000 seat multi-use stadium in time for the 2022 NCAA football season. The opening matchup against the University of Arizona Wildcats also marks SDSU’s 125th anniversary.

But the city still raised a number of concerns with the university’s current plans for the site.

The IBA office cited the purchase price, taxes and fees from private development, the city’s potential liability for the parcel after the sale and transfer has been finalized, the target closing date and the city’s responsibility for improvement projects resulting from development in Mission Valley.

San Diego City Attorney Mara Elliott said her office viewed the university’s revised offer as a significant step forward, but not the final step. She said her office had not received concrete details from SDSU and thus sought clarification on key points of contention regarding the sale and transfer of the land.

She also said the university’s timeline for approving the sale and transfer of the site was aggressive.

“It’s not fair to represent to the public that we can complete all of this in a two-month frame,” Elliott said.

She also said her office would work to meet the university’s deadline while stressing the need for flexibility.

Council members Barbra Bry and Jennifer Campbell said they supported the university’s timetable as laid out in the requested council action.

Both council members stressed the need to uphold the will of the voters and San Diego city taxpayers.

1/2 I appreciate the hard work of city staff and @SDSU representatives in getting us this far. I believe we are extremely close in reaching a deal. https://t.co/buAH4KeIrU

The unanimous city council vote means city officials will update members regarding the PSA draft in mid-December. The vote also specified an outside closing date of December 2020, despite opposition from university officials.

“This project could benefit the entire city and county of San Diego,” Fisher said.

Public comment in favor of the SDSU Mission Valley expansion plan urged the council to support the university’s vision. Speakers raised the issue of the need for university expansion, SDSU athletics, student success, sustainability and economic and academic growth.