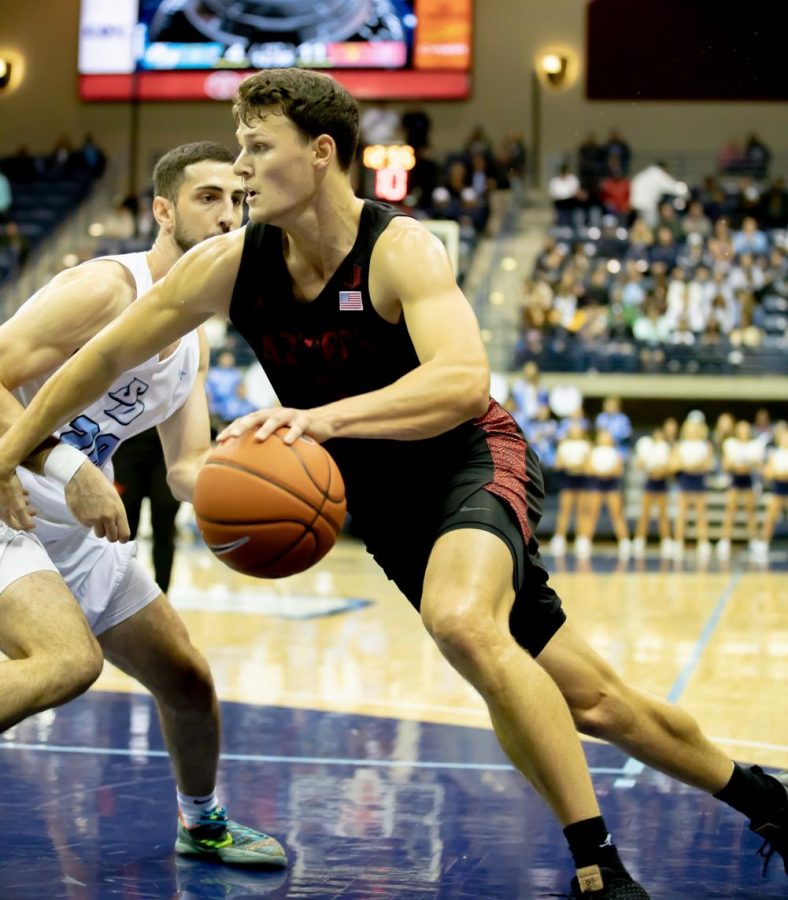 Graduate senior forward Yanni Wetzell drives to the basket in the Aztecs' 66-49 win over the University of San Diego on Nov. 20 at Jenny Craig Pavilion. Wetzell finished the game with a career-high 20 points and 12 rebounds.

After suffering a 73-61 home loss to the University of San Diego last season, San Diego State men’s basketball avenged that loss with a 66-49 win over the Toreros (2-4) at the Jenny Craig Pavilion on Nov. 20. The win marks the Aztecs’ largest margin of victory against USD in its home arena and the team’s first 4-0 start since 2014-15.

Forward Yanni Wetzell totaled the third-most minutes (27) for the Aztecs and had a substantial impact throughout the game on offense.

The Vanderbilt grad transfer ended the first half just short of a double-double, collecting 13 points and nine rebounds by the break.

At the final buzzer, he collected 20 points on 81.8% shooting, 12 rebounds and one assist.

Head coach Brian Dutcher said since he had a week to watch film, he knew Wetzell would show out also considering one of the Toreros’ starters was injured.

“I knew that (senior forward Alex) Floresca was strong, but with their injury to (junior forward Yauhen Massalski), I thought we had an advantage against inside against their power forward, and that proved to be true,” Dutcher said. “He backed down, he played with great poise and patience and strength and had a really nice game for us, both scoring and rebounding.”

Wetzell said he worked on his postgame during the week-long hiatus.

“The first three games, I missed a few (shots) at the rim that I should’ve made,” Wetzell said. “This whole week, I’ve been in the gym just working on my finishes and having someone go against me instead of just open-air shots.”

Wetzell made his first 3-point shot as an Aztec with 18:10 left in the second half.

On the defensive side, he also made his presence known with two steals – both coming in the first half.

Wetzell said he enjoyed his first double-double performance in an Aztec uniform.

“It was fun,” Wetzell said. “The first few games I was just kind of finding my rhythm, and it was kind of nice to just go out there and finally put those (shots) in the rim.”

Points in the paint make a difference

Sophomore forward Nathan Mensah and junior guard Malachi Flynn each had six points in the paint.

In total, the Scarlet and Black dominated the Toreros in points down low 40-18.

Dutcher said teamwork was the main emphasis that derived from those baskets.

“Our post players were all good,” Dutcher said. “It’s execution, it’s individual talent and it’s unselfishness that allows you to get those sort of inside baskets.”

Limited success from the perimeter

In its first three games, SDSU registered 24, 20 and 27 shots, respectively.

On Wednesday night, the Aztecs were only able to put up 12 shots from beyond the arc, only cashing in on three of those attempts.

That’s 25% from 3-point range – the lowest percentage so far this season.

Although the Aztecs shot 47.5% from the field, mid-range jump shots did not fall as often as they have in their previous three games.

Dutcher said the Toreros continued to contain the perimeter, which gave SDSU more chances near the basket.

“We couldn’t make any (long-range shots) today and so they stayed extended,” Dutcher said. “They wouldn’t give us any kick-out threes, and so the pass was the late pass to the post – the lob pass.”

Flynn said the Toreros played solid defense, but the Aztecs should have capitalized on more of those 3-point opportunities.

“They did a good job, but to be honest, I think they were just missed shots,” Flynn said. “It was one of those nights. They took away the three a little bit, but we make those shots. It’s nothing to stress about.”