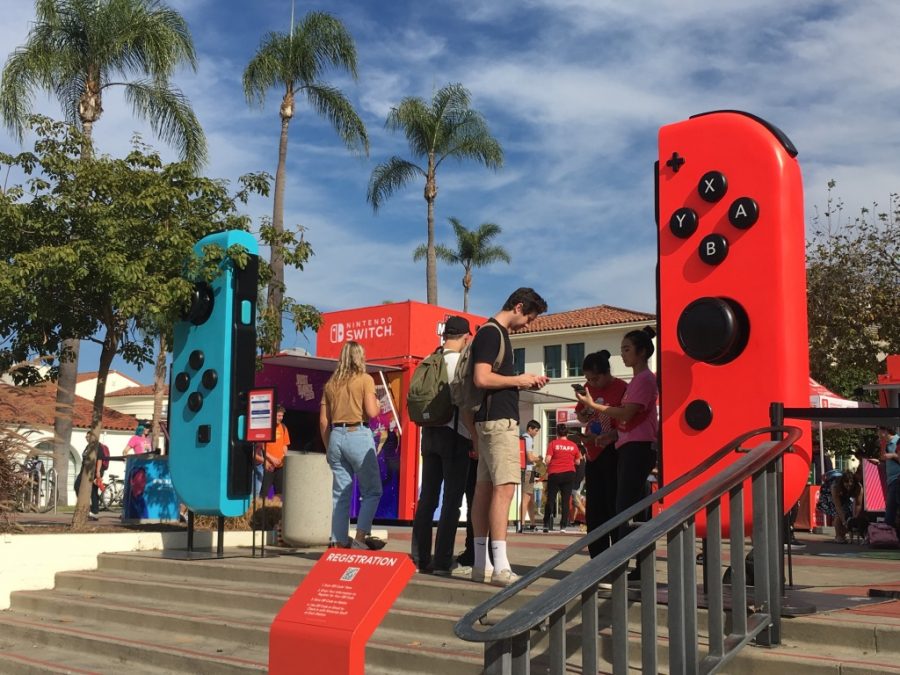 Students lined up to play Nintendo games during the promotion of the Nintendo Switch Lite.

At the entrance were two large-size dual Nintendo Switch controllers, where many students posed for photos. Inside the site were stations showcasing a variety of games students could play with each other. At the center was a large video board displaying students playing each other in “Super Smash Bros. Ultimate.”

Students competed against each other in head-to-head matches. The winners would get prizes such as a fanny pack, drawstring bag or a “Super Mario” hat.

“Nintendo reached out to Rose (Olvera) about the event,” Brown said. “This event was part of them launching the new switch controller. They have been doing this at many different college campuses and they wanted to reach out to us. We thought it would be good for the students to check out.”

Statistics junior Sierra Stein said she enjoyed the atmosphere and variety of games students were able to play.

“It was a really fun event,” Stein said. “I think it’s really neat because a lot of students just go to their classes then go home, but it gives them an opportunity to do fun things on campus.”

History junior Miles Johnson said the event was a great place to be able to meet and compete against new gamers. It was especially helpful for him because he’s a professional sports gamer.

“This is actually really cool because a lot of people I normally wouldn’t see playing video games came out here to play,” Johnson said. “It’s awesome to have this free event here on campus.”

The goal for Brown and Olvera with this event was to get students to destress from studying for final exams.

“It was great to be able to partner with Nintendo,” Brown said. “This is a good distraction for students because they have been studying hard for finals. This was held to get them to destress and have some fun.”

Overall, Brown and Olvera hope “The Nintendo Switch: Together Tour” can lead to more collaborations with the gaming company in the future.

“We would love to do more events with Nintendo,” Brown said. “Now that they have established a connection with Rose, we hope they can do more things with us in the future.”