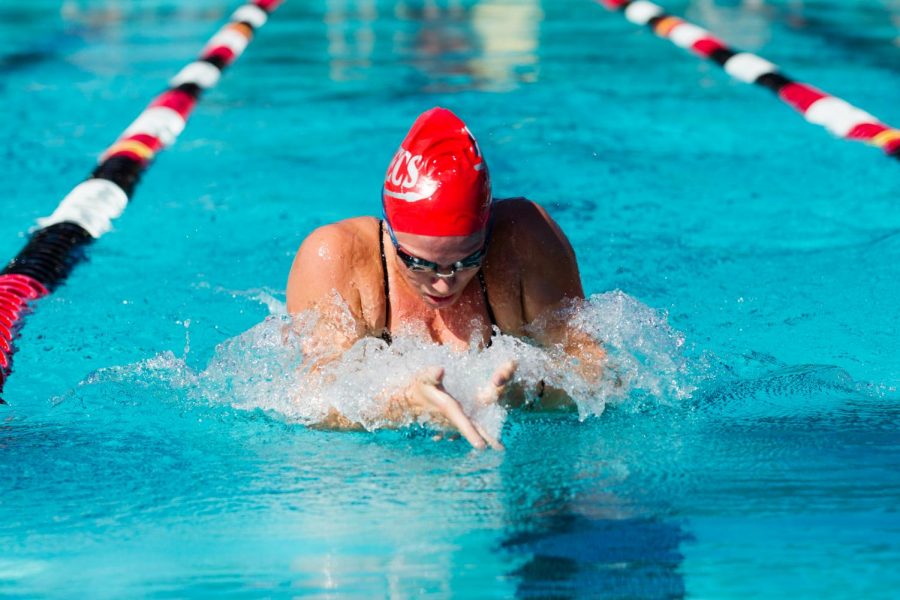 Senior swimmer Morganne McKennan swims during a breaststroke event at the Aztec Aquaplex. McKennan set a program record for the fastest long course time in the breaststroke during the Mizzou Invitational Long Course Time Trials on Nov. 19.

Dozens of athletes compete for the chance to represent their country in the Olympic Games.

On Nov. 19, one San Diego State athlete took the next step to get that chance.

McKennon accomplished this by touching the wall at 1:09:80, which set a program record for the fastest course time.

The backstroke is McKennon’s specialty as she won the 100m breaststroke at the 2019 Mountain West Championship with a then-record time of 59:50.

Her performance in the 100m and 200m breaststroke assisted SDSU in winning the 2019 Mountain West Swimming and Diving Championship.

The San José native will now get the opportunity to swim at the U.S. Olympic Trials in Omaha, Nebraska at the CHI Health Center Omaha from June 21 to 28.

Should she succeed in Omaha, McKennon will punch her ticket to compete in the 2020 Summer Olympic Games in Tokyo for Team USA.

Each woman won at least one gold medal for the U.S., with King and Meili winning the gold and bronze medals in the 100m breaststroke, respectively.

The 1:09:80 time was a full second faster than Mizzou junior Emily Snyder, who finished second in the event. Also competing in the same event was SDSU sophomore Kristina Murphy, who finished in fifth place.

McKennon wasn’t the only Aztec to break a program record at the Mizzou Trials. Senior Courtney Vincent broke her personal record twice in the 100m fly, finishing with a time of 51:86.

The swimming and diving team’s next competition will take place on Dec. 20 when the Aztecs begin school-versus-school play against Vanderbilt and Seattle.