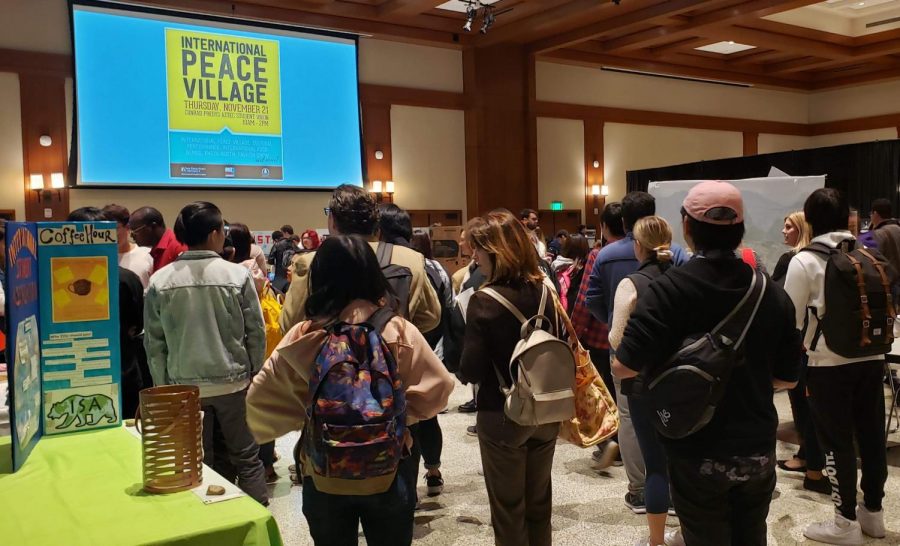 Dance and fashion were on display for the 63rd International Peace Village, held in Montezuma Hall.

With groups tabling to represent different countries ranging from South Korea to Zimbabwe and everywhere in between, the annual event offered a look into cultures from around the world.

“This is a tradition of the campus, and I’ve just been honored to be able to continue with this event and putting my stamp on it,” Johnson.

The event also brought students from around the world to Montezuma Hall.

Johannes Assam and Alexander Hilber are exchange students from Austria majoring in international business. They took part in the International Peace Village by representing Austria and speaking with students to show them all that their home country has to offer.

Assam said the International Peace Village gives everyone a chance to learn about other cultures.

“I think it just broadens your horizons a little bit because most students maybe only know about the U.S. and not really about other countries,” he said. “So I think it’s very good to get to know that there are other ways of living, other cultures.”

Hilber said coming from Austria as an exchange students gave him and Assam a different perspective given. He added their cultural backgrounds motivated them to represent Austria during the International Peace Village.

“We want to represent our country to people here,” Hilber said. “We want to encourage people to go to Austria and to learn a little bit about our culture and European culture. That’s our mission of all of us here today.”

The event’s concept of promoting cultures from around the world captured the interests of some students.

Psychology senior Alysa Gough said the promotion of cultures outside of her own was a reason she chose to attend the event.

With the different countries and cultures represented, Johnson said the event wouldn’t have been possible without everyone who volunteered to get involved.

“This event couldn’t be possible if we didn’t have our students to volunteer to do booths and have our faculty and staff and departments and multiple organizations on campus,” Johnson said.