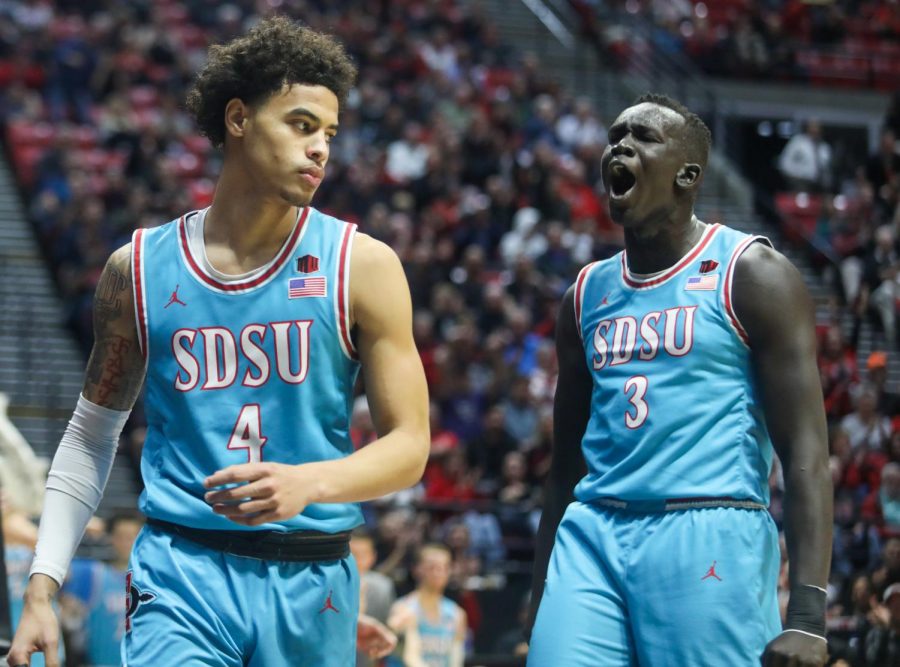 Sophomore forward Aguek Arop (right) is pumped up after a play during the Aztecs' 62-49 win over Tennessee State on Nov. 25 at Viejas Arena.

San Diego State men’s basketball overcame a rough shooting night to record a 62-49 victory over Tennessee State Monday night at Viejas Arena. The Aztecs moved to 6-0 for their best start since the 2010-11 season (when the team finished 34-3).

1. Aztecs go almost 9 minutes without a made field goal in the first half

The Aztecs had their biggest lead of the first half when they were up 21-10 with 8:50 left. They had just gone on a 9-0 run a few minutes earlier.

For a quick second, it seemed that SDSU was going to pull away towards the end of the half.

Exactly the opposite happened.

Aside from four free throws from senior guard KJ Feagin and forward Yanni Wetzell, the Aztecs went scoreless in the final 8:50 of the half.

SDSU shot 0-for-11 during those final nine minutes, resulting in 30% (9-30) shooting from the field in the opening period.

Dutcher said the struggle to put the ball through the net had to do with lack of ball movement.

“Kind of held the ball too long, dribbled it one extra time, and it didn’t move freely,” he said. “Dribbled the air out of it at times and it has to move freer or we have to move into our sets better.”

2. Seiko comes off the bench and gives Aztecs a spark

Sophomore guard Adam Seiko subbed in around the 12-minute mark of the first half. Within seconds of being on the floor, Seiko nailed a 3-pointer to give SDSU a 14-5 lead.

That was one of his three makes and attempts – all from 3-point range.

Seiko nailed three shots from distance for a total of nine points in 11 minutes.

“It felt really good to especially hit my first 3,” Seiko said. “I always want to just stay ready. Shots weren’t falling for all of our guys tonight, but as long as I can always step up and have the opportunity then I surely will, and that’s what I did today.”

When the starters shoot 10-for-35 (28%), the Aztecs can certain use production like that off the bench.

Even when he wasn’t on the floor, Seiko made his impact from the bench – literally.

Dutcher said Seiko was preaching to the team during the timeout, urging them to play better. He even got the whole team to stop talking, so they can listen to what Seiko had to say.

“So we listened,” Dutcher said. ‘’(Seiko) talked about being in a stance, showing them that, let them know that we’re playing this possession defensively … I thought that was insightful. It’s not only physical, it’s mental, and that’s the biggest part of the game.”

3. SDSU moves to 25-0 under Dutcher when allowing less than 60 points

Since Dutcher took over as head coach to begin the 2017-18 season, there is one stat that has guaranteed an Aztecs victory.

Allow less than 60 points and you win.

Monday’s performance moved Dutcher-led teams to an overall record of 25-0 when playing that kind of defense.

During the height of SDSU basketball earlier this decade, the team was known for its defense and rebounding.

In recent years, the program has moved toward the direction of offense – a team filled with shooters and scorers.

Still, defense remains a priority in Dutcher’s program, and success has come along with focusing on that side of the ball.

“It’s such an offensive-minded team that I’m trying to get that shifted to where they think about defense all the time,” Dutcher said. “I’m trying to preach that we’re talented offensively, and don’t think too much about whether you’re the leading scorer or someone else is. Just come out and play as hard as you can defensively, and we’ll be rewarded for that. And we were tonight.”

The Aztec defense allowed TSU to shoot 35% from the field.

Under Dutcher, when the opponent shoots 40% or less, SDSU is 34-3 with 12 straight victories.