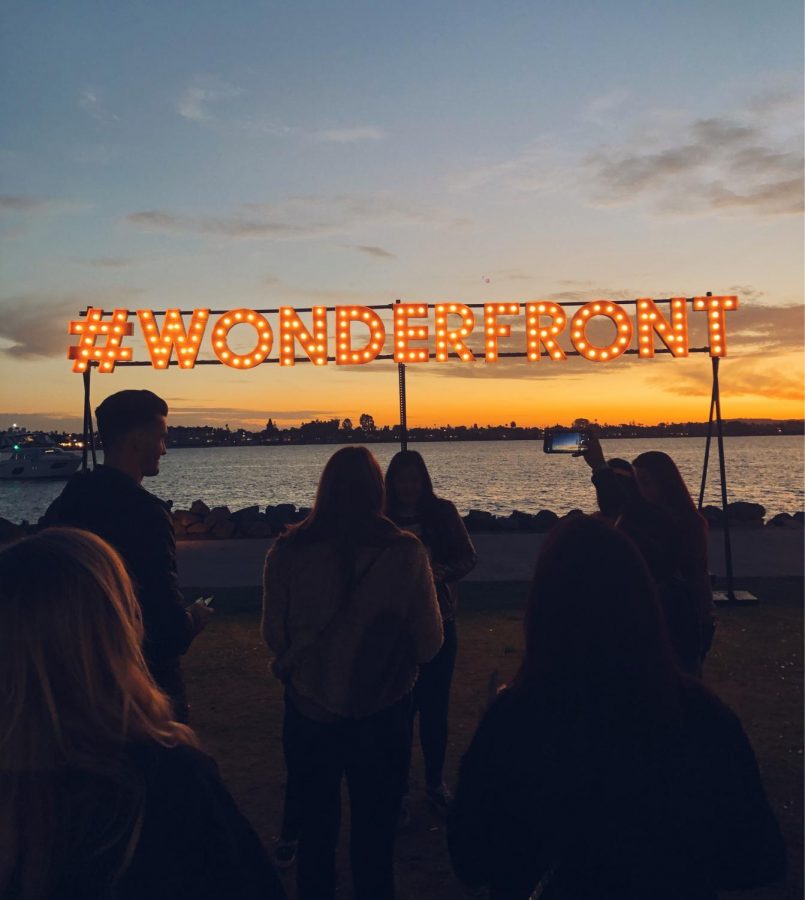 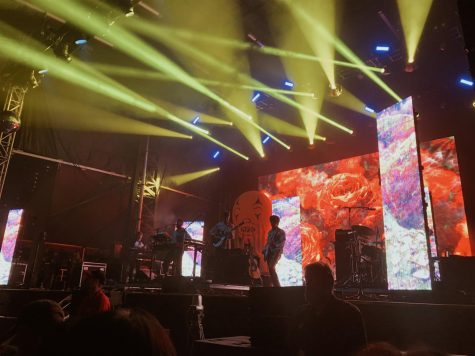 It was a three-day wave of art and music at the first-ever Wonderfront Music and Arts Festival.

Using the area where the San Diego Bay meets the city as a massive venue, the festival provided its attendees with the chance to appreciate the two geographic locations while listening to live music during the Nov. 22 to 24 weekend.

Each day brought a variety of performances, vendors, food and art to the seaside celebration, making every personal experience a memorable one. Below you’ll find snippets of the three days to give you a glimpse of all the wonders the festival brought to both land and sea. 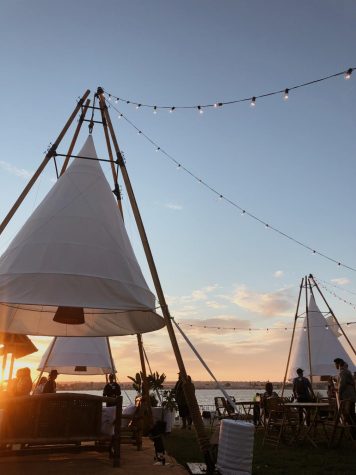 To start their weekend, a few Wonder-fronters headed to the Craft Beer Garden to sip on one of the thirty flavors of beer and play games such as Connect Four under the sun.

As guests gradually started pouring in, the white tents that were lined up alongside the bay began to fill up with people eager to check out the band merch the festival was selling.

Meanwhile, in a bohemian, campsite-inspired lounge, Abby Girodano and Jose Rodriguez waited on a pink velvet couch for the reggae band Pepper. They were “pre-gaming” inside an aluminum trailer when they said the festival had a calming environment

“It’s been more chill,” Giordano said. “I’ve been to other festivals like Coachella where it’s more crowded. Here it is more relaxed. I feel like it’s more low-key.”

Rodriguez’s impression of the festival paralleled the one of Giordano. He said the quieter crowds at Wonderfront made his first time at a music festival more enjoyable.

“It’s the first (Wonderfront) ever so it makes sense that a lot of people don’t know about it, but that’s good in a way,” Rodriguez said. “We get more of it to ourselves.”

The chill, laid-back ambiance of the festival began to pick up as the night went on. By the time the sun went down, bands like Pepper and Earthgang were greeted by larger crowds with double the energy. 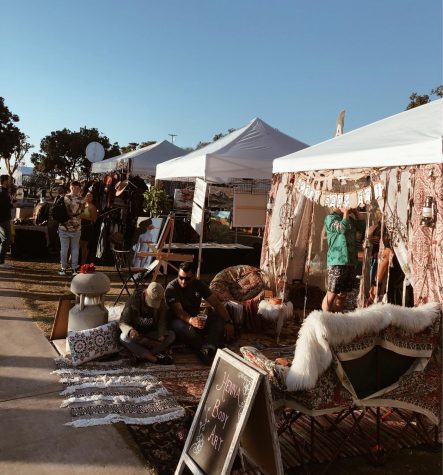 SDSU alumna Akira Finn stood out from the crowd with her unicorn headband and glitter-covered cheeks.

Finn said her unicorn-themed festival attire — a sheer top, light-up sneakers and metallic tights — was intended to start a conversation with other attendees and bring a smile to their faces.

“I just like to dress up,” Finn said. “You get to express yourself through music and art so I think of myself as almost like a piece of art walking around.”

At the end of the night, the sound of guests singing everything from X Ambassadors’ upbeat alternative lyrics to Don Omar’s reggaeton lyrics echoed throughout the site. This music contrasted seamlessly with the glistening marina and the lit-up buildings of downtown. 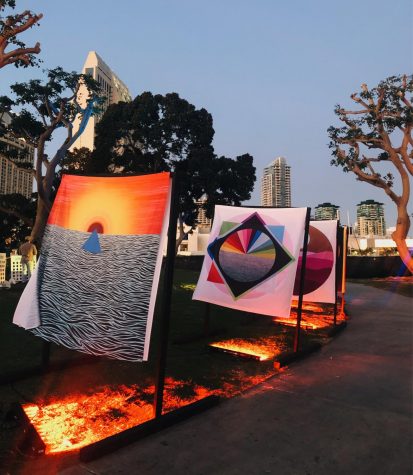 As the temperatures increased on the second day of Wonderfront, the foot traffic did too — a possible response to the diverse lineup of the day, including Nicky Jam, MGMT, Migos, Flatbush Zombies and more.

In terms of art, a series of installations were scattered across the different waterfront venues. Paintings taller than people, fabrics with printed designs and local art vendors all contributed to the variety of crafts on display.

Local artist Emily Hess brought her namesake online shop “Emily Hess Art,” to life by selling her rainbow-colored resin jewelry and prints. Some of her handmade accessories took the shape of tie-dye flowers, while others embodied hearts and moons.

“A lot of people don’t necessarily have the money or the space to buy a large painting,” Hess said. “But you can wear art and still show that you like art with things that are handmade.”

A few moments later while the sun was setting, the American music duo Phantogram hit the stage, giving their large crowds the opportunity to enjoy their live renditions of “Fall in Love” and “Mouthful of Diamonds.” 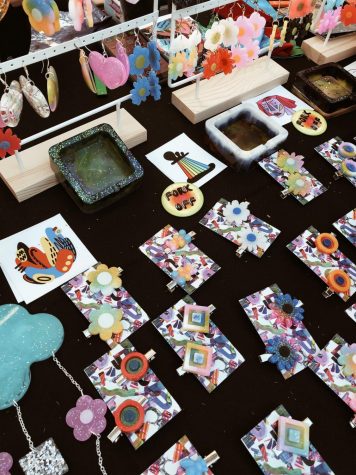 Wonder-fronter Priscilla Kostal was especially enthused to see her favorite band perform given it was the main attraction that drove her to the festival.

“I’ve been listening to them since 2010 and every album moves me,” Kostal said. “Every time I see them live, I fall in love again.”

A small number of people enjoyed Phantogram’s performance from the neon-colored couches that formed part of a nearby art installation and chill area designed by community artist Rob Tobin. The psychedelic lounge was a team effort between Tobin and the members of A Reason To Survive (ARTS), an organization focused on igniting the power of creativity in youth.

As the weekend compilation of art and music came to an end, I decided to embark on a few coastal activities to get the full Wonderfront experience.

Water taxi rides were complementary to those who attended the festival, making it easier for attendees to go from one end of the venue to the other without having to break a sweat to make it to a performance. 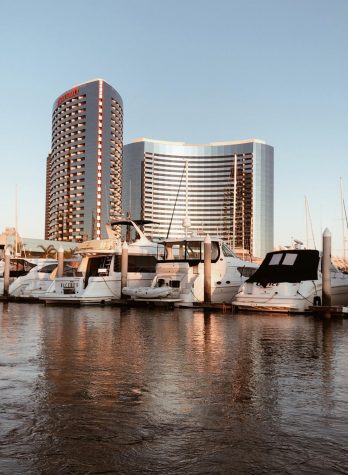 The cruise ride in the bay took us alongside the stages where Grace Vanderwaal performed and into a dock that was home to more food stands, a stage and a silent disco.

Wonderfront guests were also invited into a three-tiered boat that provided a place for comedians like Simon Gibson to joke about youth and their dependency of social media platforms.

Audrey Azzeh, a Wonder-fronter who attended Gibson’s stand up, said she loved her overall experience at the festival.

“I think the location’s amazing, I don’t think you could pick a better spot in San Diego to do this,” Azzeh said. “I liked the classy environment, I love where it is and the artists. For a first-year festival, I think it was really amazing and well-planned.”

The Wonderfront arts and music event is set to return in 2020, according to the San Diego Union-Tribune.