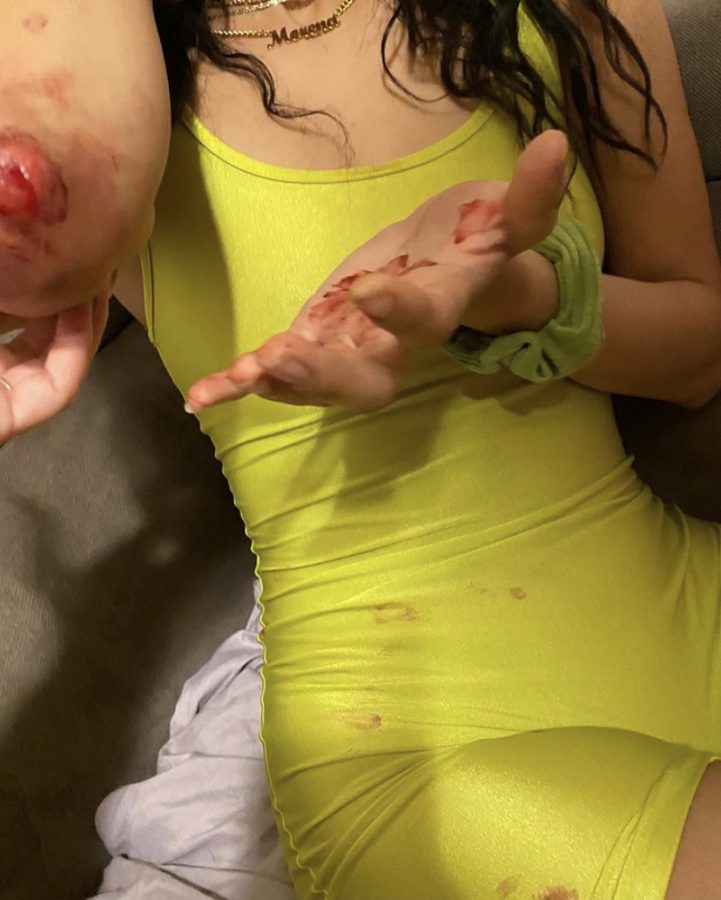 SDSU alum Natalie Lara sustained injuries to her elbow after an altercation at a pub in Pacific Beach.

SDSU alumna Natalie Lara is taking legal action against Backyard Kitchen and Tap, alleging she was brutally thrown against a wall and pinned to the floor by three male security guards before being thrown out of the establishment.

The incident occurred after Lara attempted to break up an altercation between another patron and her friend on Nov. 24.

She said she was on the dance floor when her friend was pushed by another woman.

Lara then told the women, “there’s no need to push.”

Lara said things escalated quickly after that point. She said a woman she spoke to, an employee at Backyard Kitchen and Tap, turned and started waving her finger at her before three male security guards approached her.

The first security guard told her that they needed to speak with her someplace else, Lara said. When she didn’t move to leave, the second security guard screamed at her to leave.

It was then that one of the guards grabbed both her hands. She told them not to touch her, then the third guard standing behind her allegedly slammed her against a wall.

“At this point I feared for my life and did not expect what happened next,” Lara said in her statement. “I was then slammed into another wall to then have him throw me several feet onto the concrete floor. While still on the floor, I had a fourth security guard running towards me and push me back down on the floor.”

Several other employees rushed to help pin her to the floor, Lara said.

Lara was diagnosed with a concussion and an injured elbow that required stitches.

Lara’s lawyer, Evan Walker, said the incident involving Lara was one of many in the establishment’s history.

“Backyard PB has a sordid history in regard to security and is dogged by allegations of racist and improper behavior toward patrons,” Walker said in a statement. “Unfortunately, here is yet another example. Backyard PB and its staff should know better by now.”

This is not the first instance security guards from Backyard Kitchen and Tap have been accused of assault and battery.

Former SDSU football player Andrew Schuur is pressing charges after he was allegedly brutally thrown to the concrete floor after being escorted out of the bar.

Schuur had mild brain damage and post-traumatic stress after the incident.

He has filed a civil suit against the bar for negligence in hiring, supervision and training of the security guards, as well as assault and battery, according to NBC 7.

In response to the allegations, a protest took place outside of Backyard Kitchen and Tap on Nov. 29.

Lara said the protest helped spread awareness about the issues with the establishment.

Backyard released a public statement in response to the allegations through an Instagram story on Nov. 27.

“Backyard Kitchen and Tap takes great pride in being part of the local community and a leader in the local hospitality industry,” the statement said. “We take any and all allegations of this nature very seriously. We have conducted investigations on the St. Patrick’s Day matter as well as the recent incident over this past weekend.”

The statement also defended Backyard Kitchen and Tap against the allegations from both cases.

“The parties making these allegations threatened that safe environment. Any injuries that may have occurred in these incidents were sustained while protecting our customers and staff. We contacted the San Diego Police Department on both incidents with no finding of any wrongdoing by any member of the Backyard staff.”