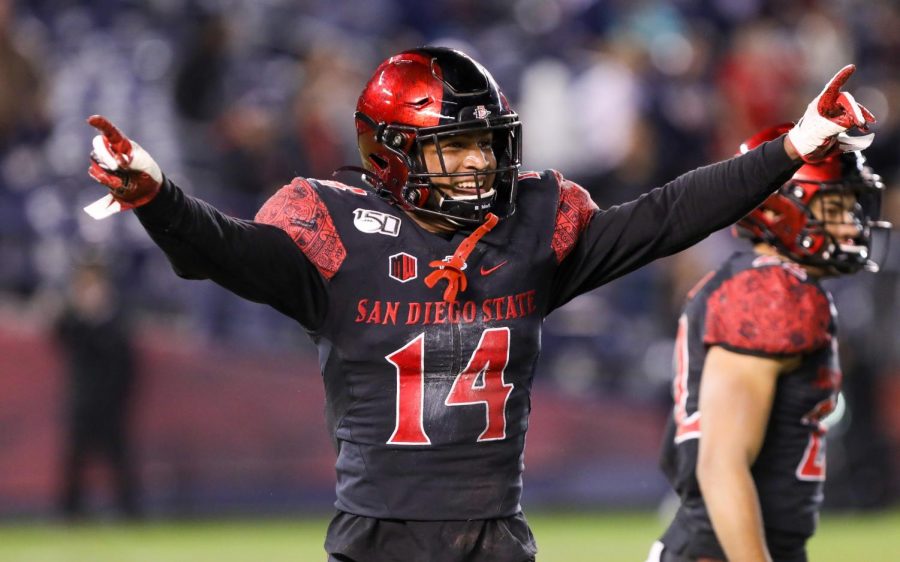 In the half decade since the inaugural College Football Playoff, San Diego State football has been bowl eligible five out of five years. But not once have the Aztecs faced a Power Five opponent.

That could all change this year.

SDSU football could accept a bid to play in the Cheez-It Bowl, likely against an opponent from the Big 12 Conference, as early as this Sunday. Two weeks removed from a heartbreaking loss to Hawaii that ended the Aztecs hopes of winning their 22nd conference championship, facing a Power Five opponent at Chase Field in Phoenix seems like a sweet consolation prize.

But the Aztecs need some help from a pair of conference champion hopefuls from the Pac-12 and Southeastern Conference.

SDSU’s bowl fate currently rests in the hands of Utah and LSU — two programs on the precipice of reaching the College Football Playoff — and the committee that determines the four programs who will face off for a national championship.

The Utes and Tigers have dreams of playing for a national championship, but both teams must first face off in conference championship games Saturday against formidable opponents: the Oregon Ducks and Georgia Bulldogs, respectively.

Victories for the Utes and Tigers could mean the Aztecs play in a premiere bowl, against a premiere opponent, in a city within close proximity to San Diego.

The College Football Playoff consists of the top four football programs in the country. The 13-person playoff committee determines the four teams and has ranked the top 25 contenders since week 10.

Conference championship victories by both LSU and Utah would likely mean the Utes make the playoff and LSU’s SEC rival, Georgia, miss out on the chance to play for a national championship. 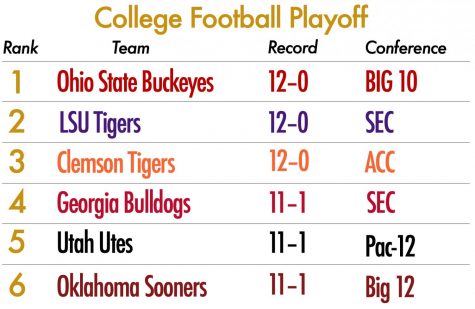 With three playoff spots all but locked up by the currently undefeated Ohio State, Clemson and LSU, the fight for the fourth ticket to the playoff likely comes down to Utah and Georgia, both of whom need to win Saturday to remain in the conversation.

In the event a Pac-12 program in Utah makes the top four, the conference would not have enough bowl-eligible programs to fill all Pac-12 bowl tie-ins. That’s because every Pac-12 team would move up in bowl assignments. Conference runner-up Oregon goes to the Rose Bowl (which is typically reserved for the Pac-12 champion) and so forth.

With six other bowl-eligible schools and seven bowl slots to fill, the Pac-12 would need an at-large school to take its place in Phoenix.

That’s where the Aztecs come in.

SDSU’s bowl résumé since the NCAA switched to the playoff format to determine a national champion has been a mix of highs and lows.

After winning the 2016 Mountain West Championship, Donnell Pumphrey broke Ron Dayne’s all-time NCAA rushing yards record in a 34–10 rout of Houston at the Las Vegas Bowl. One year prior, SDSU dismantled a Cincinnati team that ranked 27th in total offense nationally, en route to a 42–7 victory.

But SDSU has lost back-to-back bowl games where their defense has surrendered a combined total of 69 points and 867 yards of total offense. When factoring in SDSU’s 17–16 loss to Navy at the now-defunct Poinsettia Bowl in San Diego, the Aztecs are 2–3 in bowls during the playoff era.

But on the heels of an impressive 9–3 record, the Aztecs hope for a chance to showcase one of the best defenses in program history, one that ranks top-five nationally in points allowed, rushing yards per game and turnover margin.

What better way than to take on a Power Five opponent, especially given the SDSU Athletic Department’s focus on scheduling Power Five non-conference opponents — from the Pac-12 to SEC — each year the Aztecs play football for nearly the next decade.

The Cheez-It Bowl, which typically features the seventh-ranked Pac-12 team versus the sixth-ranked Big 12 school, could be that opportunity. Based on overall and conference record, Iowa State and Texas are ranked fifth and sixth in the conference (both at 7-5, 5-4 Big 12).

National bowl projections for the Aztecs remain all over the board. But the picture should be clearer come Saturday night.