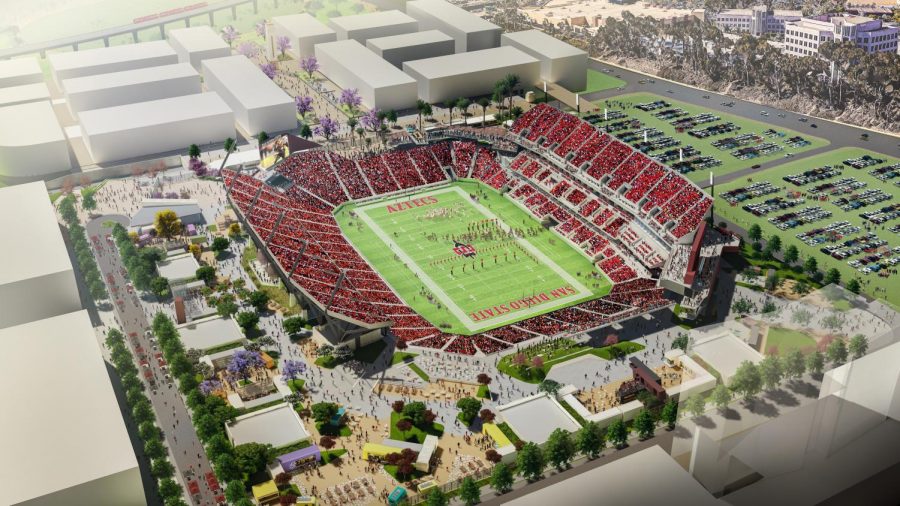 An aerial rendering of SDSU's proposed multi-use stadium at the site of its Mission Valley expansion.

by Jeanette Giovanniello and Michael Cline

As a result, the field will be named Bashor Field at Aztec Stadium.

The $15 million grant will be used to help fund the total stadium construction costs — currently projected to be $250 million.

“I feel its a privilege to be here today to add to the glory of the university and people in it,” Bashor said. “The students and the people of San Diego will benefit from everything we do with this property, and it will be so wonderful to have something positive to think about and have everybody participate in.”

“SDSU has long inspired to build a world class university, research and innovation district and multi-use stadium in Mission valley,” de la Torre said. “Today, due to the generosity of a local philanthropist and visionary leader, the momentum continues.”

Chair of the CSU Board of Trustees Adam Day said the gift will help thousands of future prospective students.

“This gift will be the lead gift to the construction of the multi purpose stadium, as well as the academic facilities and laboratory space, for over 15,000 new students that need and demand a seat in the CSU system.”

SDSU envisions breaking ground on the stadium next spring. The university hopes to complete construction of the stadium in time for the start of the 2022 NCAA football season and the Aztecs’ Sept. 3, 2022 matchup with the Arizona Wildcats.

“With this gift, we are one step closer to the shovel on the ground in April 2020,” Wicker said. “The city council and mayor’s office have overwhelmingly supported our offer to purchase the property, and now our teams are working diligently to ensure we meet our timeline over the next couple of months.”

The university’s 35,000-seat multi-use stadium will replace the 52-year-old SDCCU Stadium the Aztecs have called home since 1967. The stadium will allocate 5,000 seats for students, along with student-specific amenities including discounted concessions that can be purchased through meal plan funds.

In an October conference call with journalists, SDSU Vice President of Business and Financial Affairs and Chief Financial Officer Tom McCarron said the university would finance stadium construction costs through a combination of philanthropic donations, a stadium naming rights deal, seat licenses for season tickets, sponsorships and a financing plan through the CSU system.

SDSU awarded Clark Construction Group the contract to design and build the new stadium in February. Gensler will serve as the stadium’s architect.

The university says the stadium will also host professional and collegiate soccer and lacrosse matches, NCAA bowl games and concerts.

In addition to the 35,000 seat stadium, the university’s campus expansion plans feature a river park, hike and bike trails, housing and educational facilities.

This story was updated at 5:46 on Dec. 5 with quotes from Dianne Bashor, President Adela de la Torre, CSU Board of Trustees Chair Adam Day and SDSU Athletic Director J.D. Wicker.