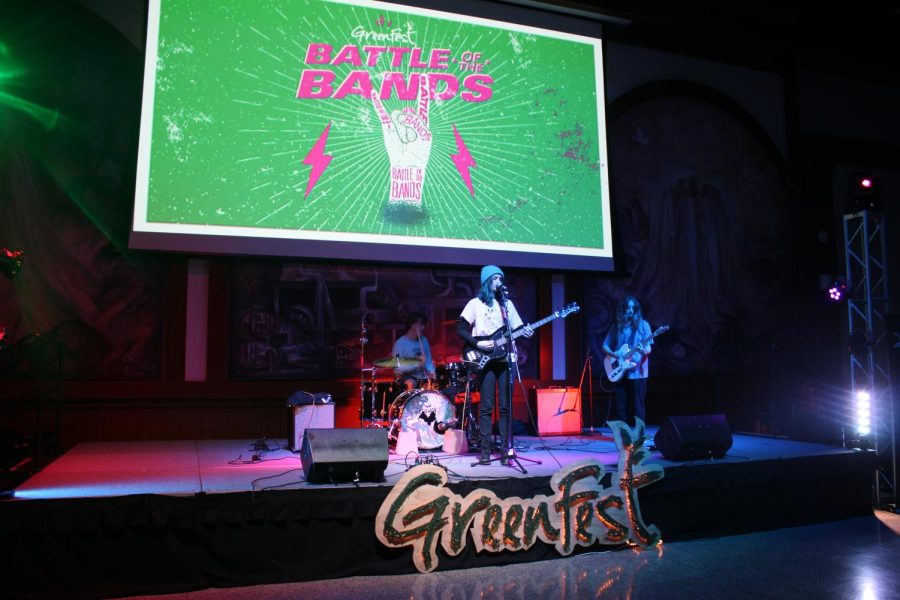 Battle of the Bands threw down on December 5th.

Battle of the Bands fanatics rushed into Montezuma Hall on Thursday, Dec. 5 to cheer on artists that competed for a spot to be the opening act for this coming up year’s GreenFest Concert.

The concert will be held at Cal Coast Open Theater in March 2020. The headliner for the 2020 Greenfest festival is still unknown, but last year’s lead act was R&B singer Daniel Caesar, so the pressure was high for student bands.

This year’s Battle of the Bands contestants were Getaway 95, Dylan Wager & Co., Sammy Bel Mar, Outside the Frame, Ariel Imani, Rain on Fridays and ZachBrosi.

The event drew in music fans who enjoy having the opportunity to be introduced to local, upcoming artists. This was the first Battle of the Bands for mechanical engineering sophomore Emom Askarnia.

“I always like finding out about new people, especially if they’re local,” Askarnia said.

During the competition, the audience was encouraged to participate by cheering on their favorite bands and artists. Students jumped around to upbeat songs and shouted catchy lyrics along with the artist performing.

The competition had a variety of contestants who varied in style such as contestant Dylan Wager & Co., who’s described to have an acoustic and pop style, and contestant ZackBrosi who has a unique blend of rock, pop, reggae and blues.

Theater junior Katie Malone described her taste in music to be somewhat limited when it comes to branching out and discovering new artists, but she got to experience a mixture of talent at the GreenFest event.

“I am not used to all the different types of music, but I really enjoyed, like, getting to know all these different genres,” Malone said.

After all seven bands performed and a few raffle prizes were given away to the audience, the judges gave the crown to R&B singer and songwriter Ariel Imani.

Standing front row at the competition, first year psychology major Alexis Dozier said the winner was one of her favorite artists that performed that night.

“All the bands were really cool. I predicted the winner, I knew she was gonna win,” Dozier said. “She had a really good sound and she sounded really all there … authentic.”