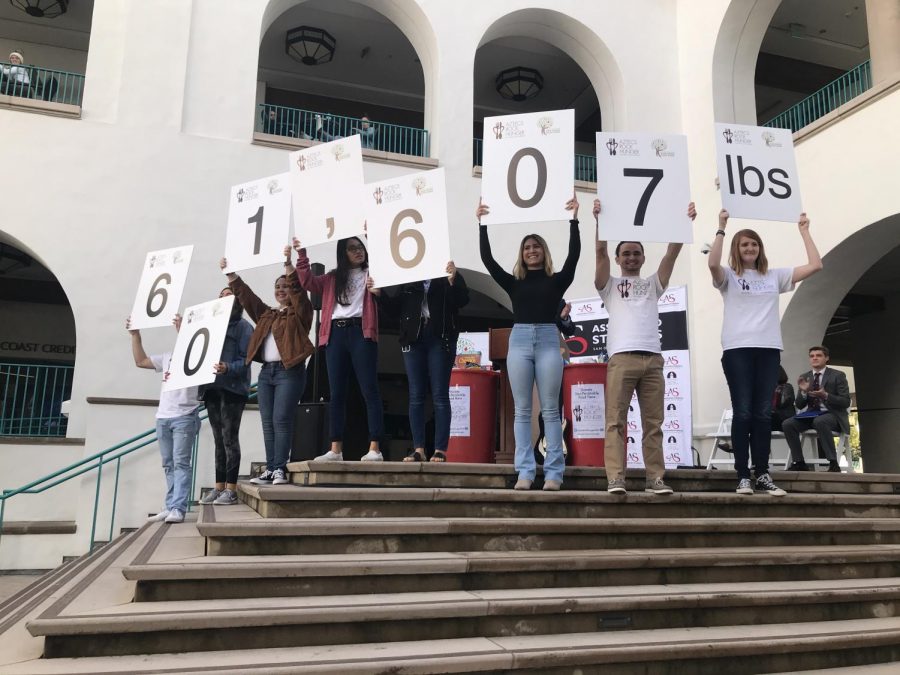 The Aztec Rocks Hunger food drive broke yet another campaign record in its 10th anniversary.

The donations go towards the Jacobs and Cushman San Diego Food Bank, which is associated with the food pantry at San Diego State.

Vice President of Financial Affairs and Aztecs Rock Hunger campaign lead Dustin Adkins was joined by James Floros, president and CEO of the San Diego Food Bank, and SDSU President Adela de la Torre. Awards were given to recognize the division of business and financial affairs, Aztec Shops, Zura Hall and various fraternities and sororities for contributing and helping with the campaign.

“Being able to see the way that something like this has a spark that actually has an impact is my favorite part of being involved in this project,” Adkins said. “Being able to tackle this (issue) and take the lead in it is really rewarding to me, and it’s something I just truly have a passion for doing. Working with my team and asking, ‘What are some new ideas we can use?’ was also really rewarding.”

Adkins has been a part of Aztecs Rock Hunger since his sophomore year. This campaign is personal to him because his family has also experienced food insecurity.

“I am a first generation low-income student myself, so my family has actually used food pantries, and we’ve used food banks before,” Adkins said. “My family has worked really hard growing up, so I know how difficult it can be to make ends meet.”

Despite the amount collected, the goal for Aztecs Rock Hunger’s 10th anniversary was to raise 619 thousand pounds — symbolic of San Diego’s area code. The end result was a more than 10,000 short of this goal.

The campaign also adopted a new approach that increased focus on recognition for on-campus clubs and organizations that help raise awareness and collect donations, Adkins said.

“This year we made a specific effort to modernize the campaign,” Aztecs Rock Hunger public relations officer Chelsey Crowne said. “We did this by rebranding and changing the logo, focusing more of our raising awareness and education efforts on social media and collaborating with community partners.”

In the past nine years, the Aztecs Rock Hunger campaign has raised 2.7 million pounds of food, and the food raised has been incorporated into the campus student food pantry, Adkins said.

The variety of ways A.S. took donations included red bins for the non-perishable food item donations, cash in person or through Venmo with volunteers or at Aztec shops and online food pantry donations.

“Having an organization such as Aztecs Rock Hunger on campus shows the effort and consideration SDSU stands for,” journalism junior Olivia Waczek said. “Knowing I attend a school who strives to help end this cycle of poverty truly shows the incentive to support our community as a whole.”

“Regardless of the total that we raised, I think it’s important to focus more on the impact that we’re making,” Adkins said. “We never wanted this campaign to be consumed by the number. While we have an ambitious goal, we didn’t want it to be ‘If we don’t hit this number, we weren’t successful.’ We’re doing something that will feed thousands of San Diegians and I think that’s something we should be proud of.”