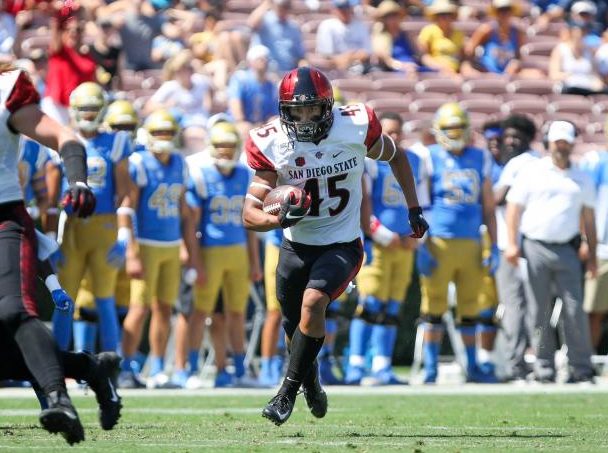 Redshirt freshman wide receiver Jesse Matthews runs upfield during the Aztecs' 23-14 win over UCLA on Sept. 7 at the Rose Bowl in Pasadena.

After entering the program in 2018 as a walk-on, San Diego State football redshirt freshman wide receiver Jesse Matthews has earned a scholarship.

This came after being named the team’s Offensive Scout Player of the Year in 2018 as a redshirt who walked on to the program.

A year later, Matthews had a good camp and earned himself playing time in the Aztecs’ first game of the season, breaking out to lead the team in receiving. Granted, it was only three catches for 25 yards during a 6-0 win over Weber State.

The local product out of Christian High School followed that up with five catches for 59 yards in a win against UCLA at the Rose Bowl.

With games such as six catches and 73 yards against Wyoming and four catches for 78 yards against BYU, Matthews has proven to be a reliable target. His best performance came against Fresno State on Nov. 15 when he posted a career-high eight catches for 118 yards.

On top of that, the SDSU coaching staff had Matthews return punts as well.

Forty-five catches and 522 receiving yards later, the second-leading receiver on the team still is without a scholarship.

When Matthews made a high-flying catch for 20 yards against three Utah State defenders on Sept. 21, plays like that garnered him the nickname “Megatron.”

How can a team’s “Megatron” not be on scholarship?

Well, that all changed Monday when Matthews sat by his locker after practice with a letter informing him he has received a scholarship.

“Yeah I got a little emotional,” Matthews said on whether or not he cried. “Everything kind of hit me at once. I didn’t cry after when they announced it at first. When I got home after (practice) to call my mom, all the emotions came.”

Matthews added he hears the noise on social media calling for him to get a scholarship.

Sophomore cornerback Darren Hall has seen Matthews’ progress in the past two seasons, lining up against one another numerous times in practice.

“Don’t let his hands touch the ball because nine out of 10, it’s a catch,” he told The Daily Aztec. “I am proud of him. He came in and made progress from the first day he was here.”

Senior cornerback Luq Barcoo was in a similar situation as a junior college player – someone who took the field not knowing if he were to ever receive a scholarship.

“For me, it’s very inspirational because I come from a junior college,” Barcoo said. “I was kind of in a similar situation where I kind of had to earn my scholarship. I didn’t get it right off the bat, so I know how hard it is, how mentally tough it can be … I got a lot of respect for him doing that.”

A reporter in Tuesday’s news conference asked head coach Rocky Long about Matthews getting a scholarship.

Long asked him how he found out, and the reporter said he saw a picture on Instagram. Long was simply glad there was no extravagant video of the announcement.

That’s not the way Long runs his program.

“He obviously deserved one,” Long said. “One of the guys that was in our program got a medical (redshirt) approved, so that allowed a scholarship to be available. As soon as it was available, we gave it to him because he deserved it.”

News was kept off Twitter, but various teammates took to their Instagram stories to congratulate Matthews earning a scholarship.

The team ganged up around Matthews and started chanting in celebration once the seniors had made the announcement.

“I was afraid they were going to hurt him,” Long said with a smile. “But (Matthews) came out of the room okay.”