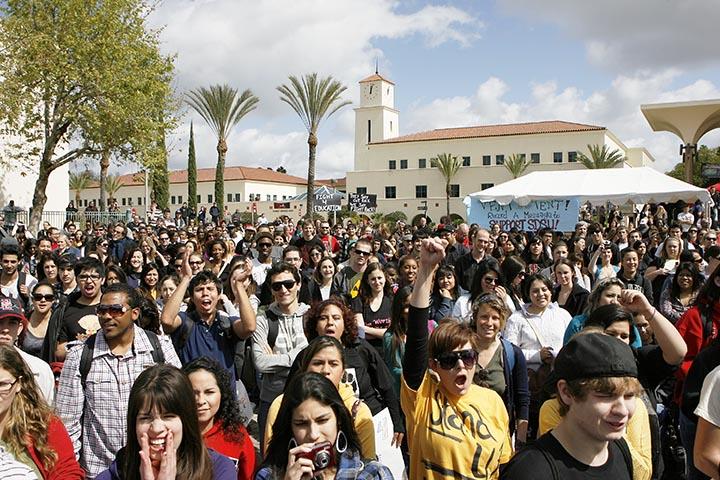 The white-and-teal behemoth that now serves as SDSU’s student union was once subject to the kinds of contentious fee referendums that continue to divide the campus today. Former Daily Aztec Editor in Chief Faryer Borhani said the proposal to renovate the building, accompanied by a $94 per semester price tag for every student, was only narrowly passed. Given the recession a few years prior, he said campus attitudes toward fee increases were vastly negative.

The approval of the student union renovations was prefaced by a 2006 proposal to renovate the space, which students approved, leading to significant fee increases. But things got complicated with the economy crashed two years later, and the project stalled. Increasing construction costs led to the 2010 fee increases once administrators realized the initial fee would not cover the price of the project.

A 2010 report released by The Daily Aztec shows the initial budget also didn’t account for compliance with the Americans with Disabilities Act or earthquake safety requirements, forcing the university to turn to students to pick up the rest of the bill.

With the recession looming over the California State University system, former Gov. Jerry Brown was forced to slash the public higher education budget by $500 million in 2011. Statewide protests by students and faculty members ensued.

The faculty response was significant due to concerns that the proposed cuts would impact union contract negotiations.

In 2011, former campus President Elliot Hirshman received a salary increase, bringing his income up to the $400,000 mark. In that same year, tuition increased.

As if the salary jump wasn’t controversial enough among students, a Daily Aztec report in 2012 revealed the president’s home had undergone more than $250,000 in renovations. The remodel was paid for with university revenue.

“(The California Faculty Association) said the money could have purchased 183 new classes, 4,600 spots for students to get into classes needed to graduate or 153 one-year scholarships for students,” The Daily Aztec wrote in 2012.

In fall 2014, a new mandatory fee that was passed the semester prior took effect. The Student Success Fee, which sits at around $200 per semester, would be used to increase course selections, tenure-track faculty lines and student success. The decision loomed over the rest of the school year, inspiring students to protest the decision.

In the spring, after months of setbacks, the student union as we know today was opened.

“We’d like to welcome you all to your new campus living room,” Hirshman said at the opening event.

The incident resulted in the suspension of all social activities among Interfraternity Council chapters. The crackdown inspired some party-seekers to get creative.

After Sigma Chi was removed from campus in 2013 following hazing allegations, former members and friends launched “Sigtopia.” The house was not technically affiliated with any fraternity chapter, placing it just outside the university’s realm of regulation and making it perfect for parties.

The party house was alleged to be the site of two sexual assault cases out of 17 reported near campus during fall 2014.

“That place isn’t a school’s dream,” communications senior Tyler Dabovich said. “It isn’t a fraternity house’s dream. It’s like that ‘Old School’ house that you can’t really regulate them because they’re not a fraternity, but they’re still partying.”

In December 2014, international student Francisco Sousa was arrested and suspended from SDSU in connection with an alleged sexual assault off campus. But the district attorney later declined to press charges, saying there was not substantial evidence backing the case.

Asserting he was falsely accused of the act, Sousa filed a lawsuit against the university and won $10,000 in a 2017 settlement agreement.

In April 2016, fliers appeared around campus that identified seven specific students that an organization claimed: “have allied themselves with Palestinian terrorists to perpetrate (Boycott, Divestment and Sanction) and Jew Hatred on this campus.”

Following what critics considered to be a lackluster response to the fliers by Hirshman, a silent protest turned into a two-hour barricade where the president was surrounded by demonstrators while he sat inside a police cruiser.

“I wanted you to defend me,” senior Osama Alkhawaja told Hirshman directly. “They called us terrorists, and you didn’t defend us.”

Last seen at a fraternity tailgate party at SDCCU Stadium, Jasmine Madarang was struck and killed by a car while attempting to cross the I-8 near Waring Road in September 2017.

Paramedics pronounced her dead at the scene.

“It’s still a mystery how she ended up on the side of the 8,” former Editor in Chief Andrew Dyer said.

Later that semester, following years of debate around SDSU’s use of the Aztec mascot, the University Senate passed a resolution to investigate the appropriateness of the figure.

The decision led to the creation of a task force, which released its findings the following summer. The group decided to retain the use of the Aztec moniker, but to instead refer to the figure as a “spirit leader.” The university also decided to retire some aspects of the Aztec Warrior in order to achieve a more “respectful portrayal.”

The spring of 2019 saw a number of incidents targeted at the Black Resource Center and black students generally, sparking widespread discussions about racism on campus.

In early March, a non-student captured the sound of a racial slur being shouted at the center on video. Just over a month later, the center was quietly vandalized, resulting in about $400 worth of property damages.

There was a large rally the following week where campus advocates presented a list of demands to the university on how to improve campus race relations. But this did not end the conflict. At the end of April, a Snapchat was discovered where a student called a black student a “monkey” and threatened to hang them like an “ornament” off a tree.