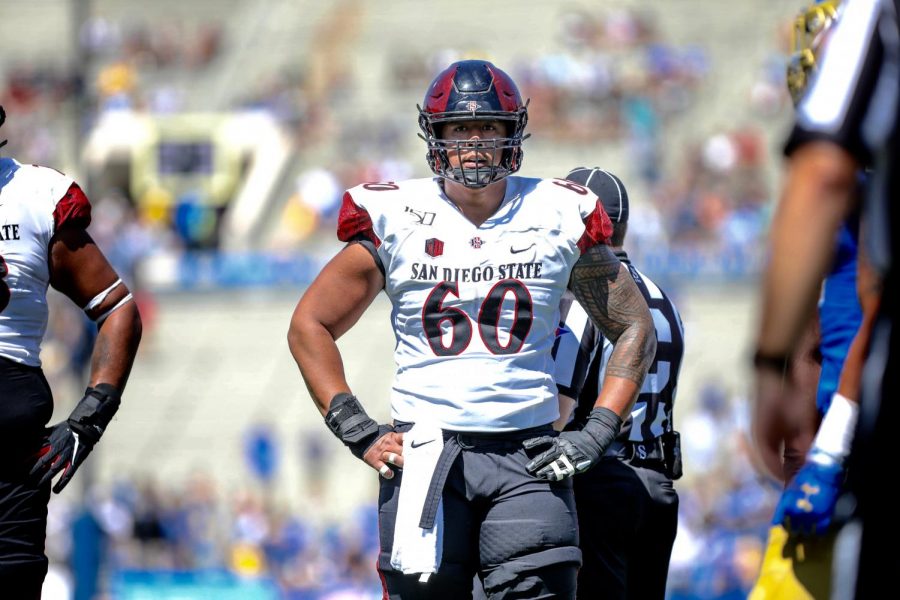 SDSU junior center Keith Ismael looks down the field during the Aztecs' 23-14 win over UCLA on Sept. 7 at the Rose Bowl in Pasadena.

Ismael is a three-time all-Mountain West selection (two first-team selections and one second-team) and a Pro Football Focus third-team All-American selection. He is the only offensive lineman in program history to make the conference’s first or second team in each of his first three seasons.

It’s hard to statistically quantify an offensive lineman’s value, but Ismael has proven to show he has been the anchor upfront for SDSU’s offense. After finishing off his junior season in last Saturday’s New Mexico Bowl victory, Ismael spoke to The Daily Aztec about his decision to enter the 2020 NFL Draft.

The Daily Aztec: What was the decision-making process like in declaring for the draft? Who did you turn to for guidance in making such a decision?

Ismael: “Just took a lot of the feedback in from scouts and everybody. I just feel like I’ve grown so much since coming to SDSU (three) years (ago). I finished my degree, which is a huge thing, so I just feel like I’m ready physically to go make that next step to the next level. I want to take care of my family as well.”

We talked about this off-script a year ago, and you seemed pretty set on declaring after the 2019 season. Was it a set path all along or was there moments where you might’ve considered staying one more season at SDSU?

Ismael: “There were several moments. Leaving my teammates and my friends was extremely hard. Through the struggles of the season, the offense, I felt like maybe I do need to stay and work on some things. But I feel like the best decision for me and my life and my family. I feel like I’ve taken this next step to push me past my limits that I’ve never been able to reach, that I might not be able to reach in college. I feel like this will be a good motivator to capture that.”

How much of a role did your family/support system have in your decision-making?

Ismael: “Huge. Family is everything. My parents did a great job of balance talking to outside people, taking that responsibility on themselves, so then I can focus on finishing my degree, finishing school. I mean they’re everything to me. They’re the reason why I’m here. Their support, their love, they push me to this point. This is my opportunity to get back.”

What does it mean to have the opportunity to be able to take care of your family financially?

Ismael: “First off I gotta say, it’s never been about the money. The dream of playing at this level have been there since I was a kid. Just to compete, bring honor and pride to my family, carry the name on my back. It means everything. My family means everything to me. They’ve given me everything. They’ve supported me through all my trials and tribulations. They’ve picked me up when I was down, kept me up when I was high.”

What moment did you feel most confident in declaring for the draft, no matter what happens?

Ismael: “I don’t know if I really had that moment. Like I said, I was just really focused on finishing my degree, finishing the season. (Declaring) was in the back of my mind. These past couple of weeks have been just praying to God, and I followed my heart.”

What will you miss the most at SDSU?

Ismael: “My friends. The friends I’ve made, my housemates, my teammates, the locker room, the energy, the culture that we built. It was tough to walk away from all of that. In college, they really do say that those are the best times of your life. It came fast, but it was one hell of a ride, I gotta say.”

Could you give a favorite moment/game you had here at SDSU?

Ismael: “My favorite moment playing at San Diego State had to be Stanford in 2017. That was my first year starting. My uncle was the offensive coordinator for Stanford, so it was a big family rivalry. To be able to do that, bring that W to San Diego State, prove that we are an elite program. We compete every year because we do. It was one of the most rewarding, fulfilling victories I’ve had. It was amazing to kick off my San Diego State playing career. It was unreal – the fans storming the field, last-minute touchdown, the blackout. Overall, I’ll be talking about that game, I’m sure, years to come.”