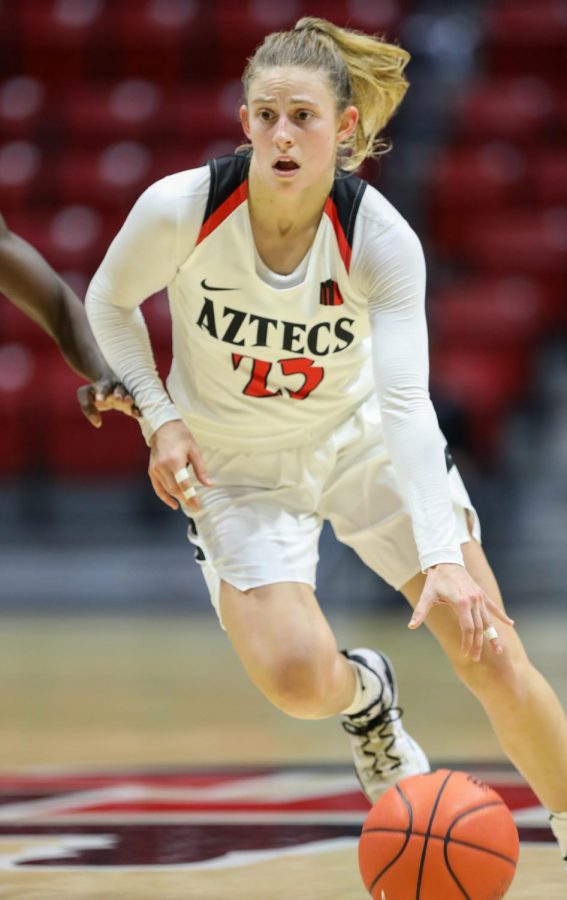 Senior guard Taylor Kalmer drives down the lane in the Aztecs' 70-47 loss to the Toreros on Dec. 11 at Viejas Arena.

San Diego State women’s basketball had 10.3 seconds left and one possession left in its game against Wyoming Wednesday night.

Even though the play was not drawn up for senior guard Taylor Kalmer, the ball found her and with the clock counting down, she threw up a three-pointer and nailed it with the buzzer going off to force overtime.

Despite the play being broken up, Kalmer remembered the game-winning shot SDSU men’s basketball junior guard Malachi Flynn made against San Jose State exactly one month ago.

“I was confused on what the play was,” said Kalmer, who had 11 points. “I actually thought about Malachi because that happened to him in his situation and I knew that if I had an open window, it was going up.”

Kalmer and the Aztecs would eventually outscore Wyoming 13-6 in overtime on Wednesday night at Viejas Arena en route to a 67-60 victory.

Here are two other observations from the game.

On Saturday, Terry notched a career-high with 13 points. She would up that career-high to 14 points on 5-of-12 shooting, including 4-of-11 from three point range. Her four 3-pointers are now a career-high.

Terry also recorded a career-high four assists and passed the career-high torch to Dornstauder, who had 18 points to lead SDSU to victory.

The San Antonio, Texas native said she did not know the career-highs until after the game.

“I don’t realize it when I am playing the game,” Terry said. “I am trying to give my team everything I can. It’s actually my team that’s giving me the confidence to keep shooting when they pass me the ball.”

Terry-Hutson said it was Terry in the first 20 minutes and Dornstauder in the next 20 minutes that kept SDSU alive.

“(Terry’s) offense, I don’t know where it is coming from, but I love it,” Terry-Hutson said. “Her offensive output in the first half and Zayn’s offense in the second half put us over the top.”

“We’re better than this,” Terry-Hutson said. “We have to play better, you know what to do, you have the knowledge, we prepped, now we have to pay attention to detail. We did a better job in the second half of defending, which allowed us to get back in the game.”

The difference was the Aztecs’ rebounding, as the Scarlet and Black outrebounded Wyoming 9-6.

Despite Adams fouling out later on, Terry-Hutson said she wanted her to change her attitude by taking more charge on the floor.

“What I was proud about Téa, is we had a moment at halftime where I challenged her to be a leader,” Terry-Hutson said. “I thought she came back in the second half, when she had an opportunity to hang her head, I thought she did a good job of what I needed her to be.”

The Aztecs will face the reigning MWC champions Boise State in Boise, Idaho on Saturday at 1 p.m.

Terry-Hutson said the Aztecs will have to focus on containing the Broncos’ experienced team despite playing one of the best not only in the conference, but in the country.

“Boise probably has the best post-player in our league, junior center Mallory McGuire (who stands at 6-foot-5),” Terry-Huston said. “She is an offensive threat similar to Wyoming’s sophomore forward Tereza Vitulova, so we are going to have to defend in the post.”