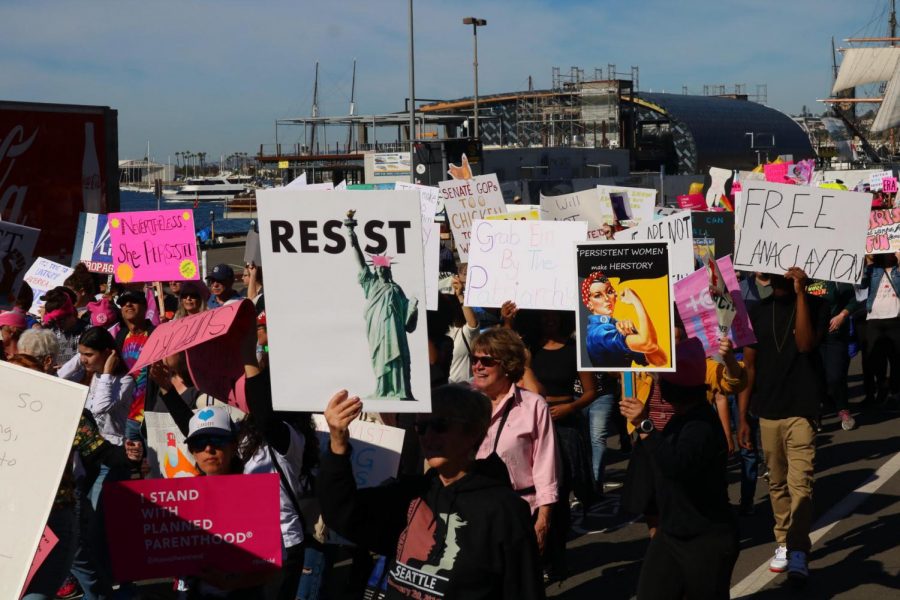 People across San Diego show up to the march, along with groups like Planned Parenthood and pro-reproductive and LGBTQIA+ rights organizations.

by Jack Molmud and Camryn McCrary

Thousands of supporters marched through the streets of Downtown San Diego on Saturday, participating in the fourth annual, nationally scaled Women’s March.

The march originated in 2016 on the weekend after President Donald Trump’s inauguration. This year’s San Diego Women’s March attracted advocates from around the county, despite losing the Democratic National Committee’s sponsorship last year. The controversy resulted after one of the march’s co-chairs publicly supported a Nation of Islam leader known for making anti-Semitic comments.

Advocates joined in solidarity with groups like Planned Parenthood and pro-reproductive and LGBTQIA+ rights organizations. The demonstrators closed down the streets surrounding Waterfront Park from 10 a.m. until the late afternoon.

Planned Parenthood advocate Alyssa Latson said equal pay and access to healthcare are important changes she would like to see supported from events like the Women’s March.

“Women’s rights are for everyone,” she said. “They are environmental rights, healthcare rights, everyone’s rights.”

Latson said vocalizing social change is the responsibility of everyone who attended.

“We all deserve to be on the same platform,” Latson said.

March attendee Judy Reiff said she participated in the marches since the Los Angeles march in 2017. She said representation for marginalized groups means more than just one march each year.

“It’s important to advocate for economic equity and feeling a sense of safety wherever you go,” Reiff said. “I want women to feel safe no matter where they are.”

Students and alumni from San Diego State were also in attendance.

Tamara O’Brien is an SDSU alumna a longtime advocate for women. She said events like the Women’s March promote “human freedom.”

O’Brien also said the current political climate, due to the Trump administration’s stance on social issues, is driving the social movement further as it is needed now more than ever.

“I am a social studies teacher, I have to support activism in order to walk the walk,” O’Brien said. “We need more than one of these events a year, we need one a month.”