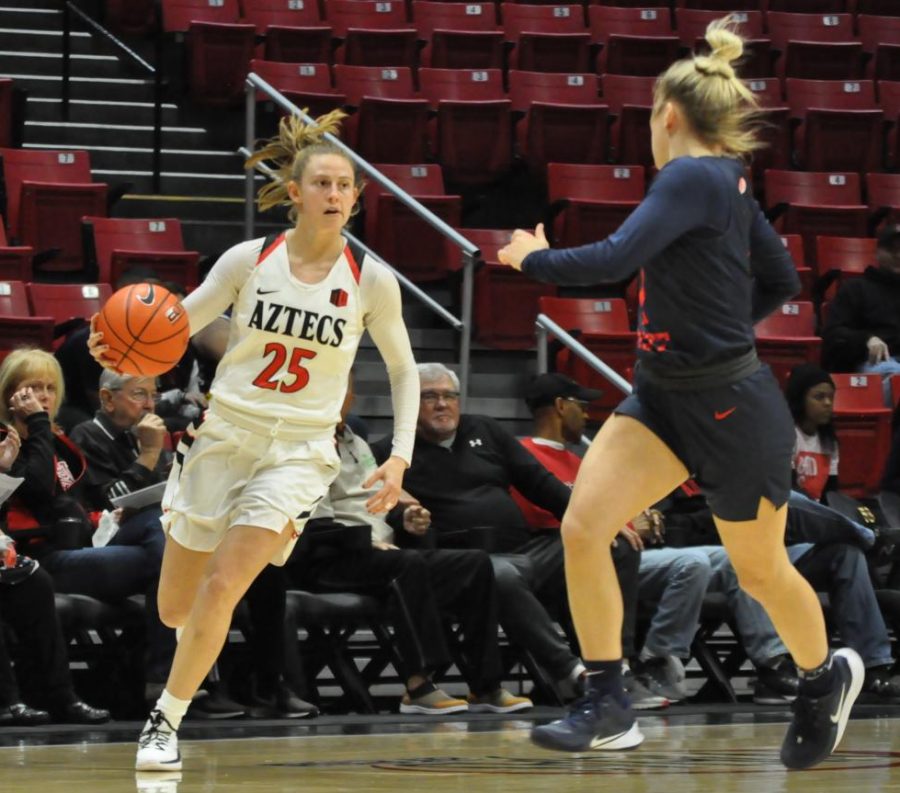 Senior guard Taylor Kalmer dribbles the ball up the floor during the Aztecs’ 65-60 loss to Fresno State on Jan. 15 at Viejas Arena.

San Diego State women’s basketball lost a close game to the Nevada Wolf Pack by a score of 70-69 on Jan. 18 at the Lawlor Events Center.

A layup from Nevada’s sophomore guard Da’Ja Hamilton with three seconds left proved to be the deciding basket to lift the Wolf Pack (9-9, 2-5).

The Scarlet and Black had a chance to win, but after Nevada had a pair of fouls to give, they only had 0.9 seconds left to do so.

With possession at mid court, a lob pass intended for senior center Zayn Dornstauder was deflected and stolen by Nevada senior forward Marguerite Effa to end the game.

Here are three takeaways from the game.

Dornstauder has scored double-digits in four straight contests, including a double-double and a new career high in points along the way.

Kalmer, who played her 100th career game and 20th as an Aztec, had a game-high 19 points. She has scored 10 or more points in 14 straight games.

Ramos added 16 points (11 of which came in the second half), a team-high eigh rebounds, three assists and one steal.

The Aztecs scored 18 points after one quarter, all of which came inside the paint.

SDSU finished the game with 42 points in the key. That tied a season-high as a team. The Aztecs shot 60% on the floor with nine of 15 baskets made.

The Aztecs average 15.3 points per game in the first 10 minutes across 20 games played this year.

The Wolf Pack were off to a slow start after making only two of their first 10 shots.

Nevada finished the quarter strong and got back into the game quickly by scoring 12 points in less than five minutes to trail by one.

3. Difficulty playing on the road

Winning on the road can be a tall task for any visiting team.

Many teams also pose a formidable record on their own court.

Heading into Saturday, the Wolf Pack were 6-3 in their own house.

This game came down to one possession.

Looking at the flip side with teams visiting Viejas Arena, the past three home games for the Aztecs have been decided by five, seven and four points.

But then again, the margins in score lines can be quite large too.

Across other conference matchups happening on the same day, Fresno State blew out Wyoming 89-59 at home and so did Colorado State as they toppled Air Force 60-40.

In the past week alone, only five Mountain West teams have won on the road out of 15 total games.

The Aztecs are 2-6 outside of San Diego this season.

The Aztecs head to Laramie in a showdown with the Cowgirls on Wednesday.

The Arena-Auditorium, or the “Dome of Doom” as Wyoming calls it, stands at 7,220 feet above sea level. That’s the highest in all of college basketball.