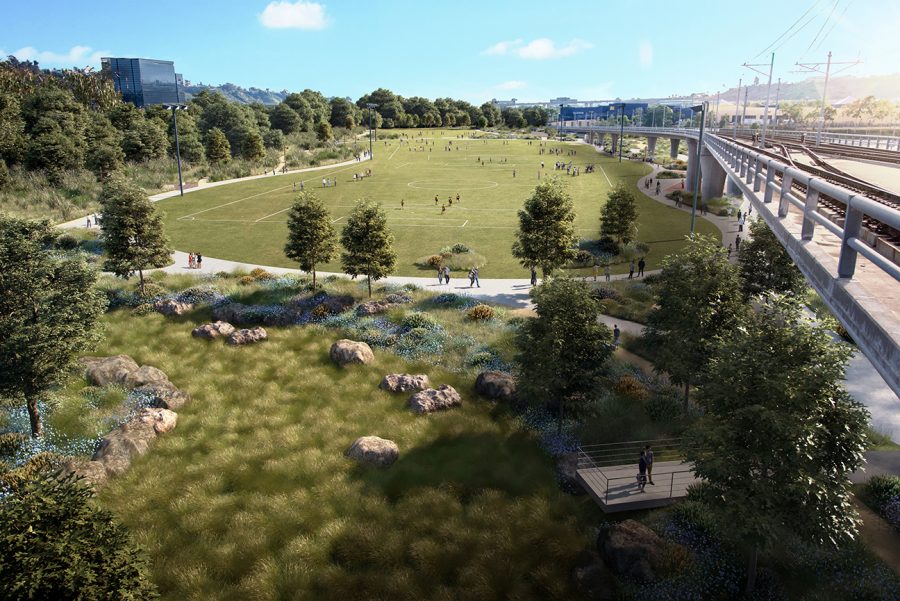 A rendering of public recreation spaces at SDSU Mission Valley.

The university also released a final version of its Environmental Impact Report on Jan. 17 after receiving over 175 letters via public comment.

The new images and final EIR document come ahead of a crucial week of meetings with city officials and the California State University Board of Trustees — both of which could determine how quickly the university can close a deal to purchase the 135-acre parcel and break ground on its university expansion and stadium project.

The university’s proposal to purchase the site for $86.2 million — and pay an additional $1.5 million for the site’s appreciation in value since 2017 — has been under review since SDSU presented a revised offer to the council on Nov. 18. City Attorney Mara Elliott is set to present the purchase and sale agreement document to city council on Jan. 27, one day before the CSU Board of Trustees is scheduled to convene its annual two-day meeting to begin the year in Long Beach, California.

There, the CSU board will review the final EIR and deliberate the purchase agreement and university’s financing plan.

“We thank all of those who took the time to learn more about our project and provide valuable input,” de la Torre said. “We’ve found creative ways to ensure our new campus is both environmentally sound and better connected to our existing campus and the surrounding communities.”

The city attorney’s office has worked to produce the purchase and sale agreement since the council voted unanimously to move forward with the university’s revised offer and plan for the Mission Valley site.

In a Jan. 9 memo to councilmembers, Elliott said the document produced by her office represents the city’s terms and conditions for the sale and transfer of the city-owned property, while both honoring the terms of and remaining consistent with Measure G, the SDSU Mission Valley ballot initiative approved by 54% of San Diego voters in 2018.

“As this is the city’s largest, most complex land use transaction in decades, it is imperative that you read the (purchase and sale agreement) in its entirety, ask the questions you need resolved, and provide additional input and direction as you see fit,” Elliott said in the memo.

Before the council meeting, SDSU and its project consultant, Schmidt Design Group, released updated renderings of over 80 acres of public recreation and parkland that will accompany a 35,000 seat multi-use stadium, a university expansion, hotels, housing and retail at the Mission Valley site.

This open space includes a 34-acre River Park the university will build — to be owned by the city of San Diego. The university plans to expand access to the River Park for surrounding neighborhoods through infrastructure improvements, along with an expanded trolley plaza and educational platform to view the river and surrounding habitat.

The university’s final EIR also calls for sustainable development, including limits on the use of natural gas while electrifying buildings and vehicles. With the goal of limiting vehicular traffic at the expansion site and on surrounding roads, the project will include upgrades to traffic signs and cameras, new protected bike lanes on Rio San Diego Drive and additional bike lanes to ensure a continuous bike path exists between SDSU’s main campus and SDSU Mission Valley.

To reduce traffic further, the university also agreed to build a Fenton Parkway bridge and finance the initial costs, estimated to be $22 million, but expects some form of reimbursement from the city.