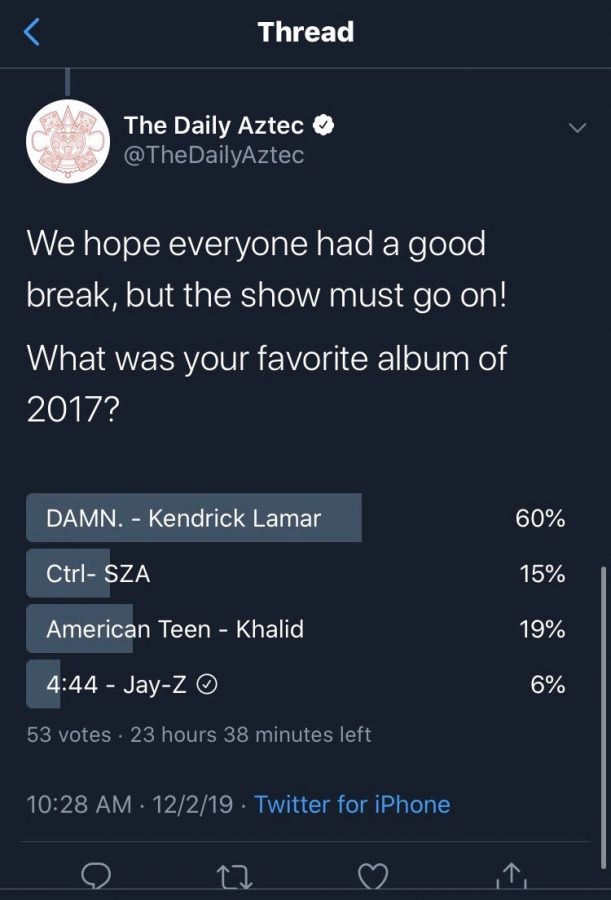 One of the Twitter polls revealed Kendrick Lamar as a winner.

Since our first installment of the decade’s best albums poll in December, followers of the The Daily Aztec Twitter page have continued to vote on their favorite collections of the year. The following albums are a few of the most acclaimed and celebrated works of art over the past five years, earning numerous Grammy awards, Platinum plaques and even a Pulitzer Prize.

Here are the final results.

Tame Impala, a.k.a. Kevin Parker, is a one-man band who produces, mixes and sings on all of his records.

While recording the album, Parker told the Guardian he was influenced to make a synth-heavy disco album when he listened to “Staying Alive” by the Bee Gees, while under the influence of mushrooms.

The melancholy lyrics and theme of the album were inspired by Parker’s recent break up with singer Melody Prochet. Although Parker’s lyrics champion personal growth while getting older, his struggles to cope after a painful breakup are put on display throughout the album.

The album’s signature song “The Less I Know the Better” has a strong disco influence and highlights Parker’s insecurities toward relationships.

The album appeared on many critics’ year-end lists, including being named the fifth best album of 2015 by Pitchfork. Besides the critical success, “Currents” debuted at number one in Parker’s home country of Australia, while becoming his first top-ten entry on the U.S. Billboard 200 chart, debuting at number four.

The meaning behind the album’s title of “Lemonade” is the tradition of passing down ways of overcoming hardships referred to as “lemonade-making” from older generations of black women to the present.

The album’s production spans numerous eras of sound over the 12-song tracklist, including  R&B, gospel, trap and folk music.

“Lemonade” is Beyoncé’s most personal album to date as it chronicles her experiences with fear, infidelity and forgiveness while being married to Jay-Z.

To accompany the album, Beyoncé released a 65 minute visual album that premiered on HBO the night of the album’s streaming release on Tidal. The film featured music videos for the album’s entire tracklist along with many special guests including Serena Williams, Zendaya and Beyoncé’s daughter, Blue Ivy.

The album’s electro-R&B breakup anthem “Sorry” received lots of attention from her “Beyhive” legion of fans due to suspicion surrounding the line, “He better call Becky with the good hair.” The Beyhive and other listeners believed that in this line, Beyoncé was referring to Jay-Z’s rumored mistress.

Since the album’s release, Jay-Z and Beyoncé have both opened up about their relationship troubles and infidelity. They still remain married to this day.

“DAMN.” is the fourth studio album from Compton, California rapper Kendrick Lamar and his third straight number one album on the U.S. Billboard 200. The production team for the album includes hip-hop legends such as 9th Wonder, the Alchemist and DJ Dahi.

Although the album departed from the jazz-heavy production of “To Pimp a Butterfly” in favor of trap and pop elements, “DAMN.” is a concept album like most of Lamar’s previous works. Lamar’s main focus on the album is his relationships with God, the Bible and his own internal fears.

Produced by Mike Will Made It, the album’s lead single “Humble” became Lamar’s first number one song on the Billboard Hot 100 chart. “DAMN.” was met with critical acclaim, being named the best album of 2017 on Billboard’s year-end chart and is Lamar’s second most acclaimed album according to Metacritic.

In addition, Lamar received an accolade that no rapper or mainstream artist had previously been awarded, becoming the first non-classical or jazz musician to win the Pulitzer Prize for music.

After years of teasing the release of “Astroworld,” named after the iconic Six Flags Astroworld amusement park of Travis Scott’s childhood in Houston, the album finally arrived. Featuring renowned artists such as The Weeknd, Frank Ocean and Stevie Wonder, the album sold 537,000 units in its first week, debuting at number one on the U.S. Billboard 200.

Scott retained the number one spot on the Billboard charts for another week, holding off fierce competition from Nicki Minaj.

The album’s standout five-minute track, “Sicko Mode,” featuring Drake, became Scott’s first number one song on the Billboard Hot 100 chart and the first rap song to spend 30 weeks on the chart’s top 10. “Astroworld” sold more than six times more in its first week than Scott’s previous album and all 17 tracks from the album debuted on the U.S. Billboard Hot 100. In addition, Scott received his first Grammy nominations from “Astroworld,” getting nominated for Best Rap Album, Best Rap Performance and Best Rap Song for “Sicko Mode.”

An album of many genres, “Cuz I Love You” mostly contains pop and funk production in contrast to her previous trap-inspired music. The album’s lyrics preach self-love, body positivity and being externally confident as a woman.

Her Billboard Hot 100 number one single “Truth Hurts” was originally released in September of 2017 with limited commercial success. However, the song soon became a hit after it became popular on TikTok and was used in the Netflix film, “Someone Great.”

Starting in September 2019, it spent seven non-consecutive weeks at number one.

Lizzo’s struggles with breaking into the music industry have been well documented this year as she has spoken about her body image issue and being homeless when she was 21. Now, 10 years later, she has finally gotten her big break and is one of the most popular breakout musicians from 2019.