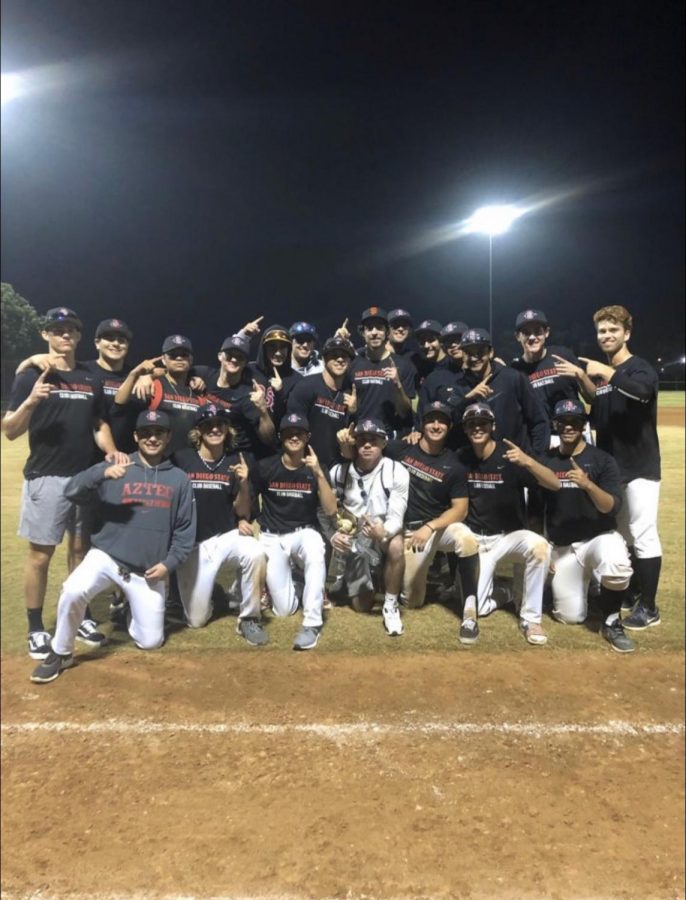 The club baseball team poses for a group shot after a game.

San Diego State’s club baseball team is preparing for a successful season and potentially another national championship as a talented group of student-athletes take on the field in February.

The club is a relatively new program established in 2016. The team plays at the Division I level of the National Club Baseball Association, which is comprised of more than 300 teams and 7,500 student-athletes.

The club team offers the chance for students to continue playing baseball at a competitive collegiate level, but without the rigorous time commitment that a National Collegiate Athletic Association team may have.

There are 30 students on the team with three freshman players who are ready to make their mark on the field. They want to put their years of experience to work and fight for a championship.

Civil engineering freshman Jeffrey Suter is a pitcher who has been playing the sport for more than14 years.

“I joined to continue to play baseball and meet new people,” Suter said. “It has been a great way to transition from high school to college, as well as accustoming myself to college life.”

Baseball brings balance in Suter’s life with everything that he does. His goals for the season include improving his pitching ability and making a run for the coveted championship.

Journalism freshman Philip Diana, with 15 years of baseball experience under his belt, believes there is no challenge too big for the team. A utility player who primarily plays second and third base, Diana raved about the team chemistry and how the upperclassmen have really worked to bond the team.

to be the toughest team to beat this season.

“Our biggest competitor in our conference and in general is GCU,” Sheron said. “They made the club world series last year. They will definitely put up a fight.”

Sheron, also a pitcher, talked about different goals the team has, such as winning the conference and having an enjoyable season all around.

The club team has given all three freshman stability while transitioning into college. It has also provided them the opportunity to continue playing the sport they love, which they don’t take for granted.

“A lot of people on our team were actually recruited by … smaller schools in the midwest and east coast,” Diana said. “But, most of them didn’t choose to go there because the school didn’t have their major or they couldn’t financially afford it. They can still keep their baseball skills sharp (with club baseball) and they could maybe eventually, if they do well, transition into their dream college and play baseball (there).”

Club baseball begins the season facing the University of California San Diego on Feb. 8 at Ted Williams Field at 10 a.m.