Leonard to return to SDSU for jersey retirement ceremony 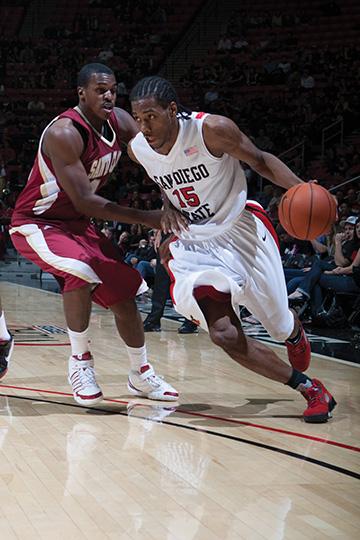 Kawhi Leonard, the forward who led San Diego State to its first Sweet Sixteen appearance in the 2011 NCAA Tournament, will become the first Aztec men’s basketball player to have his jersey retired by the program.

Leonard will return to campus Feb. 1 when SDSU hosts Mountain West foe Utah State. The ceremony will be held at halftime.

In his two seasons with the program, Leonard helped the Aztecs break a four-year NCAA Tournament drought — with appearances in 2010 and 2011 — after winning consecutive Mountain West tournaments.

His second year on the Mesa proved most productive for the small forward from Riverside, California. In his 2010-11 season, Leonard ranked first in rebounding, fourth in scoring and steals and sixth in free-throw percentage in the Mountain West.

Leonard was among the most productive players nationally, ranking fourth in double-doubles and ninth in rebounding.

His production on both ends of the floor landed him on the All-MWC first team and Wooden Award All-American team and was one of 10 players nominated for the Naismith Award and 20 for the Wooden Award, both of which recognize the most valuable player in the country.

After leading SDSU to the Sweet Sixteen in 2011 — a narrow 74-67 defeat to the eventual NCAA champions UConn Huskies — Leonard decided to go pro and declare for the NBA Draft. Leonard was selected by the Indiana Pacers with the 15th overall pick before being traded to the San Antonio Spurs.

Now a member of the Los Angeles Clippers, Leonard would go on to enjoy success with both the Spurs and Toronto Raptors, having won Finals MVP for each team in 2014 and 2019, respectively.

In his nine years since going pro, Leonard has notched four NBA All-Star appearances and is a two-time All-NBA First Team player. His defense has been recognized with two defensive player of the year awards and three first team NBA defense accolades.

Honoring Leonard in 2020 seems fitting for an Aztec program that surpassed the 2010-11 record of 20 straight wins to start the year.

The retirement ceremony has men’s basketball players thinking of life and their university legacy.

“Seeing Kawhi coming back and seeing his jersey hung up and retired, that’s a great thing for the university to be able to do that,” junior forward Matt Mitchell said. “You definitely think of that and future terms and being a face of the program.”

Mitchell said he grew up not too far from Leonard. Both forwards hail from the Inland Empire, a region Mitchell said doesn’t produce too much basketball talent.

Kawhi? Mitchell? Not too shabby for Inland Empire kids. Both have left their mark on SDSU athletics in one way or another.

Coach Brian Dutcher served as an assistant under then-head coach Steve Fisher when Leonard was at SDSU. He said he is excited for Leonard to make program history.

“To be the first one to have your jersey hang in the rafters of Viejas is a heck of an honor and well deserved,” he said.

Dutcher said the program’s decision to retire his jersey was for the long list of accomplishments he had while on the Mesa, and not just for his professional career.

“We’re hanging it because of what he’s done at San Diego State,” he said. “To come in and hang two (Mountain West tournament champion) banners here, to take us to our first Sweet Sixteen and to be the ultimate team player and selfless — that’s why the jersey is going up.”

SDSU will face Utah State in front of a sold-out crowd Saturday afternoon.

Michael Cline is a second-year graduate student in the Rhetoric and Writing Studies department. Follow him on Twitter @michcline