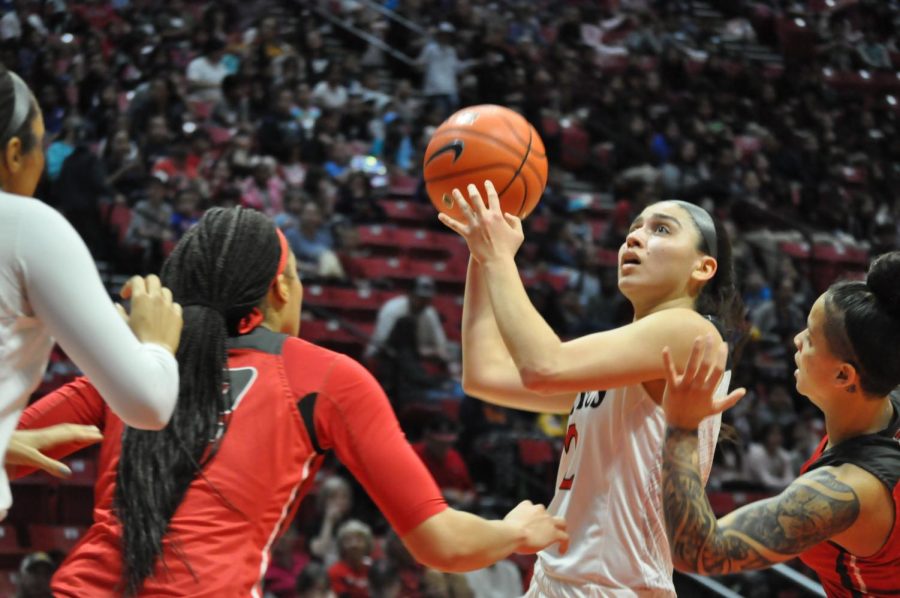 Sophomore guard Sophia Ramos goes in for a floater during the Aztecs' 75-74 win over New Mexico on Jan. 29 at Viejas Arena.

Sophomore guard Sophia Ramos recorded a double-double, 32 points, 11 rebounds and 5 assists. The 32 points and 11 rebounds are career-highs for the San Antonio, Texas native.

“I thought Sophia played a great game tonight,” Terry-Hutson said. “She did a lot of things for us. She was a steady hand for us, she scored the ball when she needed to, she controlled the pace when she needed to.”

Terry-Hutson added Ramos is blossoming as a sophomore.

“She’s growing up in front of your eyes,” Terry-Hutson said. “She’s maturing into a really good basketball player who can attack people from different levels.”

As a senior, guard Taylor Kalmer is feeding her experience off to players like Ramos, especially when both play the entire game, which both did.

The Oregon State transfer has scored double-digits in 17 consecutive games.

The last time that feat was accomplished was during the 2012-13 season when both Courtney Clements accomplished it in 18 straight games and Chelsea Hopkins lasted 16 games.

Kalmer said she was successful when the Lobo defense was not able to get set.

“I was seen in transition and my teammates were able to find me to get easy layups,” she said.

Most teams in college basketball do well when crowds favor them.

This game was the annual Field Trip Day, where elementary students and their teachers were in attendance.

As a result, SDSU broke its previous attendance record of 5,271 set in 2007 when SDSU faced then-No. 2 UConn and then-freshman Maya Moore was on the Huskies.

There were 5,320 in attendance on Wednesday .

“(It was fantastic) to have over 5,000 people in this arena,” Terry-Hutson. “It was nice for us to be able to play in front of fans and to hear that same excitement in the arena and have that home court advantage.”

Kalmer said playing in that environment – especially with the elementary students in attendance – gives her motivation to play every day.

“It’s a good reminder to see these kids out here and we were once in their shoes watching games and we want to inspire them,” Kalmer said.

The Aztecs were able to increase their chances to make the free throws and pull down rebounds against the Lobos .

In SDSU’s last three games, they were outrebounded and averaged under 50% at the free-throw line.

This time, the Aztecs outrebounded the Lobos 41 to 29 and knocked down 24-of-27 from the free throw line.

Half of Ramos’ 32 points came at the free throw line.

Ramos’ final two free throws came with five seconds left to seal the game and a new career-high in points.

The 5-foot-9 guard said getting to the foul line is something the team has stressed.

“It’s great,” Ramos said. “I love getting to the free throw line and not just getting there, but making them, so going 16-for-16 is nice.”

Terry-Hutson said she continues to see improvement from Ramos.

“What I’m most impressed with is over the past two games her defense is getting better and her rebounding was phenomenal,” Terry-Hutson said of Ramos’ 11 rebounds.

Dornstauder had 11 rebounds; however, Vanderdoes was coming off an ankle injury and did not practice on Monday.

Terry-Hutson said Ramos and the other guards are able to help their teammates out with rebounding.

“(Ramos) would be the first to tell you what we talk about and what we practice is our bigs have to box out so our guards can fly in and get rebounds,” Terry-Hutson said. “It’s an assist to Zayn and Baylee.”

Up next, SDSU faces Utah State on Feb. 1 in Logan, Utah.

Terry-Hutson said her team will have to control the ball better as the conference tournament nears.

“(Utah State is) a team that is getting more and more confident,” Terry-Hutson said. “We’re playing hard. We’re going to try and limit our mistakes and we have to continue to get better.”