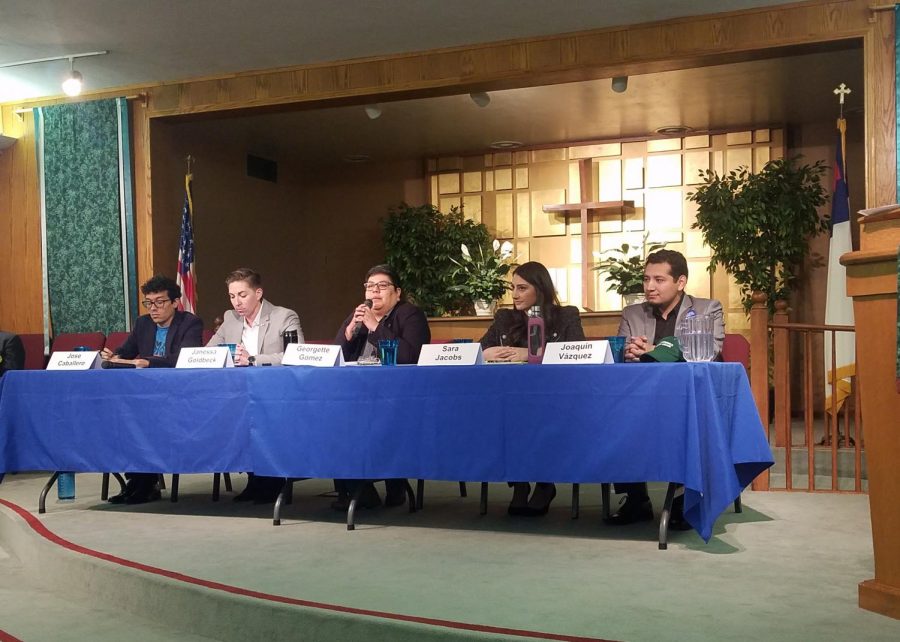 Candidates from the 53rd Congressional District debated their plans to combat climate change and increase housing supply in San Diego on Feb. 3.

The College Democrats of SDSU co-hosted the debate alongside local climate change organizers SanDiego350 and Sunrise San Diego, as well as several other local organizations.

The debate presented a unique opportunity for the local climate advocacy groups to direct their questions at candidates who will be in a position to implement their proposals locally and federally, which included some vetting by climate organizers.

The moderators asked each candidate to commit to a timeframe to achieve zero carbon, and Caballero, Jacobs and Vazquez said they aspire to meet that goal by 2030. The other two candidates, Goldbeck and Gómez, said they’d need until 2050.

All candidates also said they would refuse campaign contributions from the fossil fuel industry.

Green Innovation and Infrastructure
Each candidate was asked about what green jobs they envision in the district and how they will have sustainable wages while being inclusive of all communities.

The responses prompted each candidate to take a holistic approach.

“Hope starts with appointing a climate czar,” Goldbeck said. “It isn’t just one thing (like) infrastructure, agriculture, transit or defense — it’s all them.”

Goldbeck also proposed fining polluters and using those funds to invest back into the communities affected by pollution.

Jacobs also took a more direct approach in advocating for free community college programs for green jobs and the use of one of the city’s natural resources.

“Here in San Diego, we have an amazing opportunity with the ocean,” Jacobs said. “We can grow food in the ocean in a very sustainable way. I think there are ways we can develop jobs in the blue economy as well.”

“The people that are going to be building that system are people who are in our communities in high (levels of) unemployment,” she said.

Climate Refugees
Candidates provided varied responses when questioned about how the nation should respond to refugees fleeing their homes due to natural disasters.
Goldbeck and Gomez proposed investing in foreign aid as a way to establish a sustainable system for countries to respond adequately to natural disasters.

Jacobs described creating an international treaty to create a type of climate refugee that ensures they have the same rights as other refugees who seek asylum.

“For some of these places of getting them to stay there has well passed,” Jacobs said. “The people who are least responsible for climate change are the ones we are seeing impacted right now and they have no other choice but to leave.”

Caballero suggested foreign aid will not stop climate crises but that he would work with other countries to produce zones where the housing of refugees could be created.

“If you’re looking for a place to sleep or you can barely afford to pay your rent, it’s hard to focus on mitigating the climate impacts that we have in our own lives,” Caballero said.

Jacobs sees the opportunity of new housing as a stepping stone to address issues of air quality, nutrition and healthier environments for all local communities — not just in affluent neighborhoods.

Vazquez also addressed the concern of displacement among people who may not be able to afford to live in remodeled environmental housing. He, like Caballero and Gómez, emphasized making any new housing accessible to underserved communities.

“We need to make sure we’re not displacing communities,” Vazquez said. “The people that are being displaced don’t end up in San Diego. They end up outside or south of the border.”

Voters of the 53rd Congressional District will have the opportunity to vote next month in the primary election on March 3, 2020, and then again in the general election on Nov. 8, 2020.