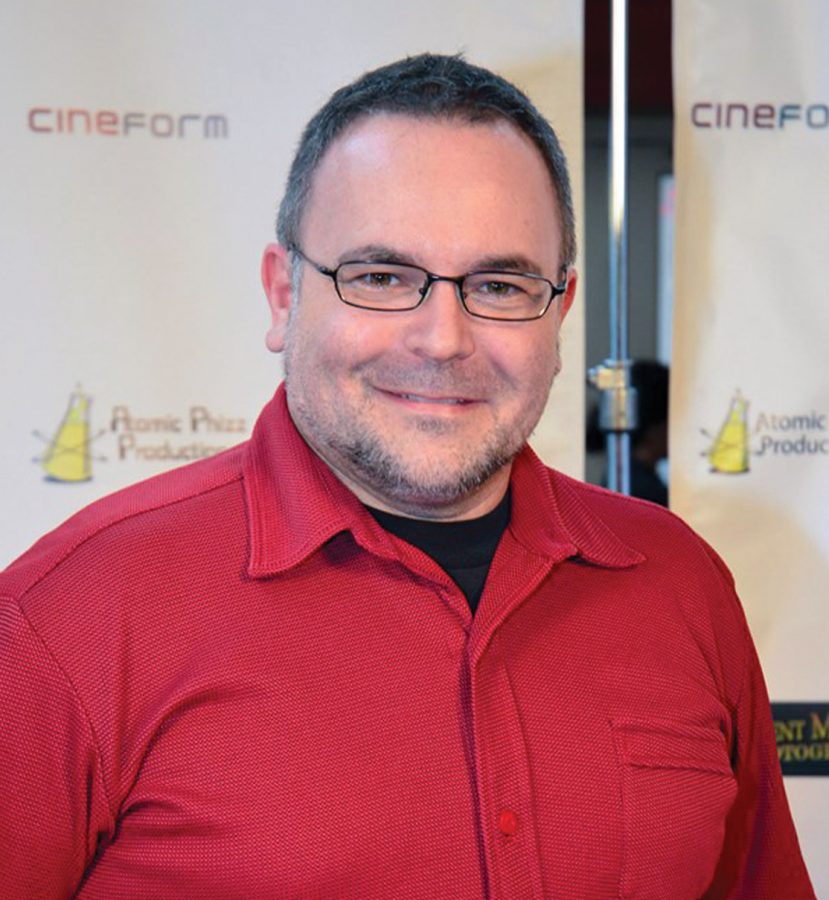 When professors create their own books at San Diego State,  they often take the form of a typical college textbook used in a class.

But for journalism and media studies professor Roman Koenig, he was turning a new page.

Koenig published his first book titled “Black Market News” on Jan. 17. The book is a fictional story about Quinn Kellerman, a reporter who finds himself in trouble with the Haskell’s eState, a corporation controlling all aspects of society.

As a tragedy rattles him to the core, Kellerman uses the event to expose Haskell’s manipulation of the public and ends up discovering who he is as a person and where he fits in society.

“It’s about one person’s journey of self-discovery of his place in society in place on constraints placed upon him,” Koenig said.

Koenig has had the story idea in his head for many years, inspired from a script he did in film school in 1999.

“In 1999-2000 I wrote the original ‘Black Market News’ in film school,” he said. “It was 150 pages and included a short film script. The core concept for the movie was there, but the story changed over time.”

The idea to write a book came together from a conversation Koenig had with friends at a local coffee house.

“The story has been floating around for years,” he said. “In 2017, my friends and I challenged each other to start writing pieces of novels to get our creative juices flowing. We all came up with something and critiqued each other’s work. From there I just kept doing it and didn’t stop.”

Once he started, Koenig spent all of 2018 working on bits and pieces of the book, and he admits that he did not expect to even get to the point of publishing it.

“I didn’t even expect to get this far,” he said. “I just found myself working on it everyday since 2018. It became a snowball and it just kept going and going.”

One of Koenig’s colleagues, Michael Clarke, is a known author of many how-to books. When Clarke saw Koenig’s first draft, he knew there was potential for it to become a full-fledged novel.

“My first thoughts about the story were that this has the makings of not just an exciting yarn but also say a few (important) things about the role the press can (and must) play in our society,” Clarke said.

Koenig’s secrecy towards the project kept many of his colleagues excited for what was ahead. Journalism and Media Studies Internship Coordinator Laura Castaneda was one of them.

“I knew he was writing a book but he never released many details,” she said. “In other words, I know he’s busy so didn’t want to keep pressing him about when the book was coming out or when.”

One challenge Koenig faced when undergoing the process of writing this book was editing. Usually authors send a draft of their book to be edited, but Koenig decided to go a different route.

He self-edited every single part of the story.

With more than 20 years of experience as a copyeditor, Koenig knew he had the capability to do what many others say is a risky move for a first-time author.

“I did it because I had 20 plus years of experience of copy editing in the professional realm,” he said. “I will also say that Michael’s feedback and my own edits were helpful to me.”

Koenig admits, if he were to write another book, he wouldn’t undergo that process of self-editing again.

“I wouldn’t do this again depending on the money I will use for the project,” he said.

All in all, despite the decade long process, Koenig is glad he can finally put this idea of “Black Market News” and writing a book to rest.

“I’ve been working on this story for 20 years,” he said. “It took so long because I never had time to flesh it out right. After 20 years, it’s time to give the story a rest because it is in place.”