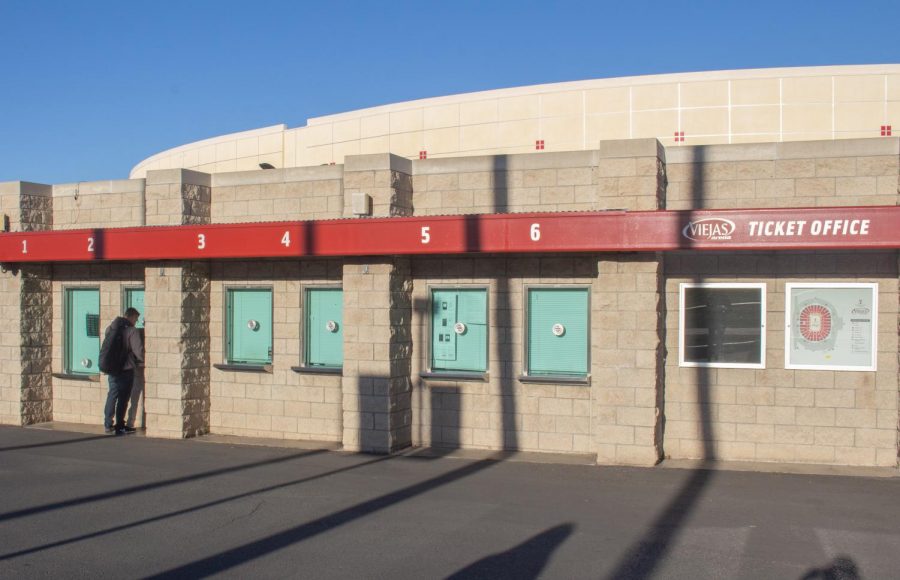 Student outside of Viejas Ticket Office.

Before October of 2017, the lines in front of Viejas Arena to get student basketball tickets were long enough to make Black Friday blush.

Students used to stake out for hours in front of Montezuma Mesa with the hopes of snagging that precious ticket that would grant them an entrance to one of the loudest venues in college basketball.

On the days leading up to tickets being released, rabid members of “The Show,” San Diego State’s infamous student section, packed the venue in front of Fraternity Row with sleeping bags, food and other necessities to set up camp at the box office.

By “set up camp,” I don’t mean going out into the woods and living off the land. I mean show up three or four hours early to Viejas Arena, pray that you get a good spot in line, sit down on the cold concrete and set up your stuff in an orderly fashion.

Then? Let the waiting begin.

Others will soon join you and that line will begin to wrap its way around the concourse until it pushes up against the edge of 5th Street.

Friends were made, marshmallows were shared and chants were shouted. It wasn’t uncommon for somebody to bring out an old copy of “Super Smash Brothers Melee” for Gamecube.

So, when it was announced on Oct. 23, 2017 that students would be able to claim their tickets online through SDSUStudentTix.com, the need for camping was over.

No more waiting in lines in front of the box office. Just tap a few buttons and boom, you have one free ticket to the game.

That’s exactly how the system should work. No flaws, no notices saying a ticket was delayed, no spinning hourglass shutting out students who want to see the game.

But just that happened to dozens of students when trying to acquire a ticket for the men’s basketball game on Feb. 1.

As soon as the virtual gates opened at 9 a.m, students from Adams Humanities to the GMCS building flocked to snap up one of 2,500 free tickets allotted to students.

What were they greeted with instead?

Well, there were the loading screens for starters. Then the website crashed, showing only an (admittedly cute) virtual dog that said the website was “encountering heavier than normal traffic.”

Wait. Heavier than normal traffic? Shouldn’t the athletics department have known students would be chomping at the bit to watch the team that is currently ranked fourth in the nation, is the only undefeated team in college basketball and can sink a bucket from anywhere on the court?

If that wasn’t enough enticement to go, there is also this guy named Kawhi Leonard who’s going to be having his jersey retired at a halftime ceremony.

You may have heard of him. He is the player who recently led the Aztecs to their first Sweet 16 in school history and then went on to win the NBA Finals MVP award twice with two different teams.

So, after wrestling with the website for hours, students began to think to themselves, “Why should I bother with this when I can just get a physical ticket at the box office?”

Yeah, about that. Physical copies were not being sold at Viejas Arena. The only option is through SDSUStudentTix.com, which hadn’t been functioning properly for hours.

The question that needs answering is this: when will it happen again? At this rate, the team will only get better as the season goes on, which means tickets will fly off the shelves like hotcakes. That, in turn, will lead to more crashes and more frustration.

My proposition? Simple. Get rid of this online system and bring back physical tickets. Bring back camping out for tickets.

Yes, getting tickets on the app might be the more simple option, but it just feels … soulless. Easy, yes, but it just isn’t the same. People don’t get to see who they were sitting with.

Should physical tickets be reintroduced and the sleeping bags get rolled out again, it would immediately equate to a student section that could bring even more noise to a game.

A sense of kinship amongst students would be made as they bond while sitting on that cold concrete. Bandwagon fans looking to turn a profit by selling their ticket will be weeded out from the die-hards, who will wait as long as they have to in order to see a Malachi Flynn three or a Yanni Wetzell dunk.

When asked about camping, freshman Chase Osborn said he preferred camping because “it allows people to meet people who are going to be at the game and build chemistry with The Show.”

That. That right there is what it’s all about. It’s about chemistry. Just as a basketball team needs chemistry on the court, so do students when orchestrating chants and Big Heads in The Show.

What better way to build chemistry than by sitting around with your fellow students and making memories?

It was part of the college experience. It was even celebrated at some points. Now, it’s no more. It has been replaced by a computer system. The experiences that fans had in that magical 34-3 season will never be felt by today’s students unless the right thing is done and SDSUStudentTix.com is done away with.

Bring back the age of the physical tickets and the campers. Sure, the lines will last for a while. But the memories will last forever in the minds of college basketball fans.