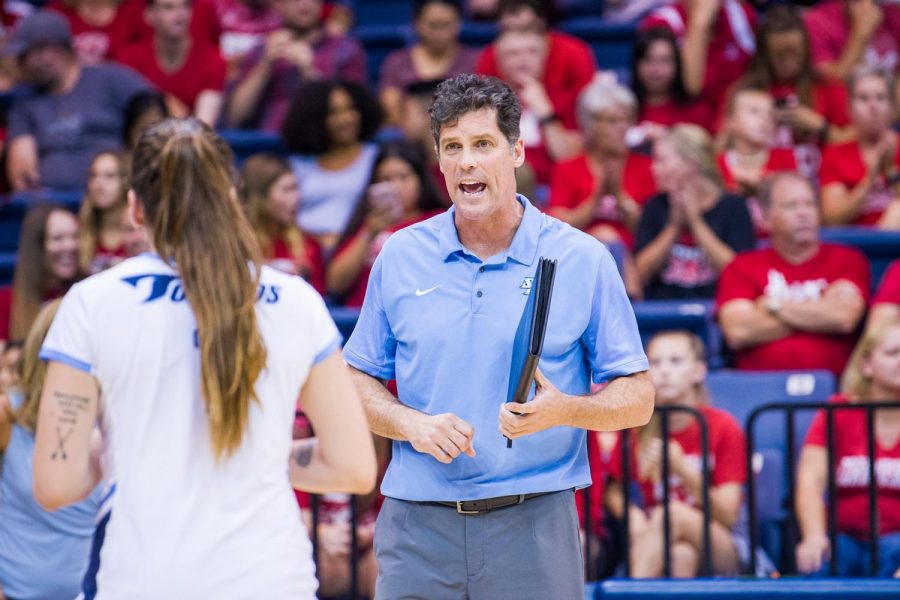 USD then-head volleyball coach Brent Hilliard instructs one of his players during his tenure with the Toreros.

Hilliard has a background of coaching in San Diego. He was the associate head coach at the University of San Diego since 2007 and has been with the Toreros for 19 seasons.

HIlliard, who went to 18 of the last 19 NCAA Tournaments with USD, said he wants to eventually put SDSU on the national map.

“I want to be as competitive within the conference to start,” Hilliard said. “I would love to compete for a conference championship to set expectations that high and after that, make them competitive nationally.”

Hilliard said he wants the team to be focused each day with a consistent attitude.

“We want them to be as competitive as possible, want to win every match, every point that they play,” Hilliard said. “From there, we’ll learn from our losses and our scuffles. We’re trying to manage expectations of being a very competitive program and not willing to lay down at any point of the reputation of the opponent.”

Hilliard understands the program will take steps back to gain more down the stretch, but said he wants his players to compete every day in order to reach the highest goal.

“Once you gain consistency, then you expect it,” Hilliard said. “If you expect to make the tournament every year, then you’re ready for the next step which is ‘I want to make a Final Four, I want to win a national championship.’ You got to start somewhere, so by being consistent on making the tournament you give yourself the opportunity to start thinking about what it’s like to be the best.”

Junior outside hitter Erin GIllchrist has one more season at SDSU, but she said she is optimistic about the new coaching hire.

“He’s really enthusiastic and that’s exciting for us to have a coach that’s enthusiastic as we are,” Gillchrist said. “I’ve heard he’s a tough coach, and I think that will be good for us. I think we need that motivation and change to get on the page we need to be on this next season.”

Although Gillchrist chose to play at SDSU three years ago, she and junior setter Camryn Machado have close ties with Hilliard.

Gillchrist and Machado have a relationship with Hilliard that span into their club volleyball days and the recruiting process.

“It’s nice to have a familiar face because he is extremely successful and you kind of have an idea of his coaching style,” Gillchrist said. “Camryn was coached by him in club as well, so it’s funny how small the world is and I think that’ll be good not only for us, but for him because we are a little familiar with him.”

Hilliard said he has seen some girls on the roster, including Machado, who transferred from Utah in 2018.

“There are a couple of athletes I have the opportunity to recruit,” Hilliard said. “I had a chance to coach Machado at the club level, so I am familiar with her and am happy to reunite with her.”

Hilliard, who competed in the 1992 Olympics, said it helps to have a background in coaching to give advice a player may need or lure a player that is being recruited.

Gillchrist said it is her dream to go to the NCAA Tournament in her final season with the help of a new coach — one who has experience in the big dance.

“I definitely think he’s a winner,” Gillchrist said. “He’s going to bring that mentality here and we need that type of motivation and positivity and he has that expectation so he is going to have that same expectation for us.”