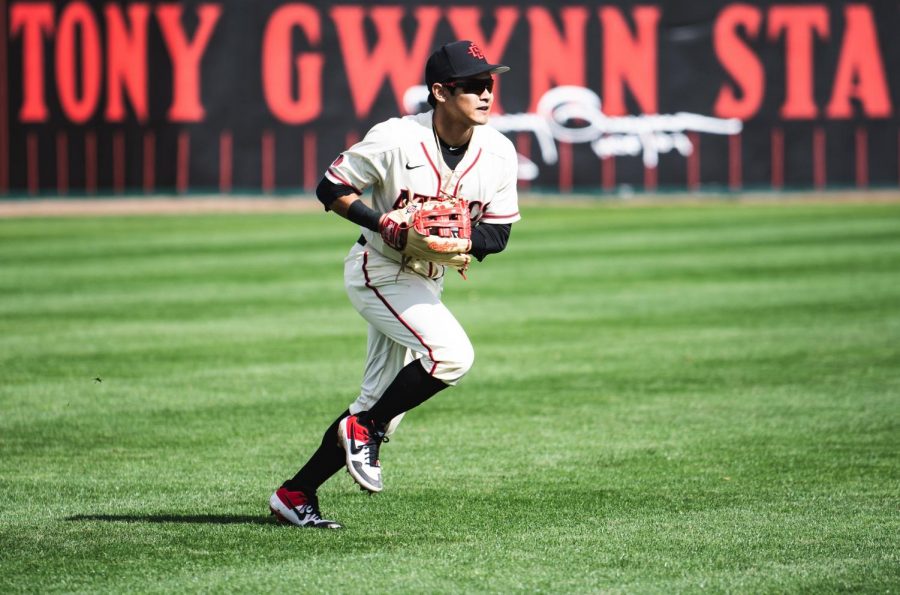 Then-sophomore left fielder Matt Rudick fields a ball in the outfield during the Aztecs 9-8 loss to San Francisco on Feb. 16, 2019 at Tony Gwynn Stadium.

One of the things synonymous with San Diego State is baseball legend Tony Gwynn.

The former Aztecs player and head coach is revered as one of the greatest hitters to ever step on to a baseball diamond while donning the Scarlet and Black.

When looking at this year’s Aztecs team, there is one player who comes to mind for head coach Mark Martinez when comparing an approach in the batter’s box similar to Gwynn’s.

The player who draws those comparisons is junior outfielder Matt Rudick.

Martinez said Rudick is the closest player he’s seen who can replicate Gwynn’s style at the plate at this stage in his collegiate career.

“I did a coach’s clinic last week and (Rudick) was a big part of my talk,” Martinez said. “(This is) probably the greatest compliment you can give somebody, and he’s as close to the model of a Tony Gwynn-type hitter as you can see.”

In two years at SDSU, Rudick has been able to provide consistency in the Aztecs’ batting order.

Rudick’s 2019 season also included 18 multi-hit games and a 21-game hitting streak – good for the longest streak by an Aztec since 2010. The Scripps Ranch High School graduate was recognized with 2019 All-Mountain West First Team honors in the process.

The San Diego native said he aims to provide opportunities for the Aztecs offense, as someone who sets the tone at the top of the batting order.

“I’m a base hit guy (at) the top of the order,” Rudick said. “I’m just going to try and get on base and try to get the other guys behind me to get me in.”

Rudick’s ability at the plate has also garnered praise from some of his teammates.

Senior outifield Mike Jarvis said Rudick has the ability to create runs in a number of different ways.

“He’s our best pure hitter and he’s quick on the bases, so if he isn’t hitting doubles, he can steal second and score in a lot of ways,” Jarvis told The Daily Aztec. “Definitely one of the best hitters I’ve ever played with.”

In situations with runners on base, Rudick was second on the Aztecs with a .352 batting average.

Martinez said Rudick’s progression as a hitter is something he is looking forward to heading into the 2020 season.

“(Rudick) does unbelievable things with his bat,” Martinez said. “He does magic things with the bat, so I’m excited to again see his process to continue to grow.”

Although Martinez calls Rudick’s ability with the bat magical, Rudick said his approach at the plate has been about simplicity.

“I don’t try to do too much,” Rudick said. “I just try to think fastball and try to keep it a simple plan.”

Rudick led the Aztecs in multiple offensive statistical categories in 2019: batting average (.320), hits (77), total bases (95) and runs scored (48). He was also the conference’s toughest batter to strikeout, averaging 12.1 plate appearances for every strikeout.

The effect Rudick has on the Aztecs is felt off the field as well.

Jarvis said Rudick knows how to get the team focused, but create an enjoyable work environment as well.

“(Rudick’s) a great teammate,” Jarvis told The Daily Aztec. “(He) knows how to have fun while pushing the guy next to him to work harder.”

While getting ready for his third season donning the Scarlet and Black, Rudick said his goal is to keep his same mentality that he’s had in his first two seasons.

“I’m just going to keep on doing what I’ve been doing for the past two years,” Rudick said of his approach at the plate in 2020. “I’m not going to try (to get ahead of) myself.”