Water polo splits opening weekend series, what to expect in 2020 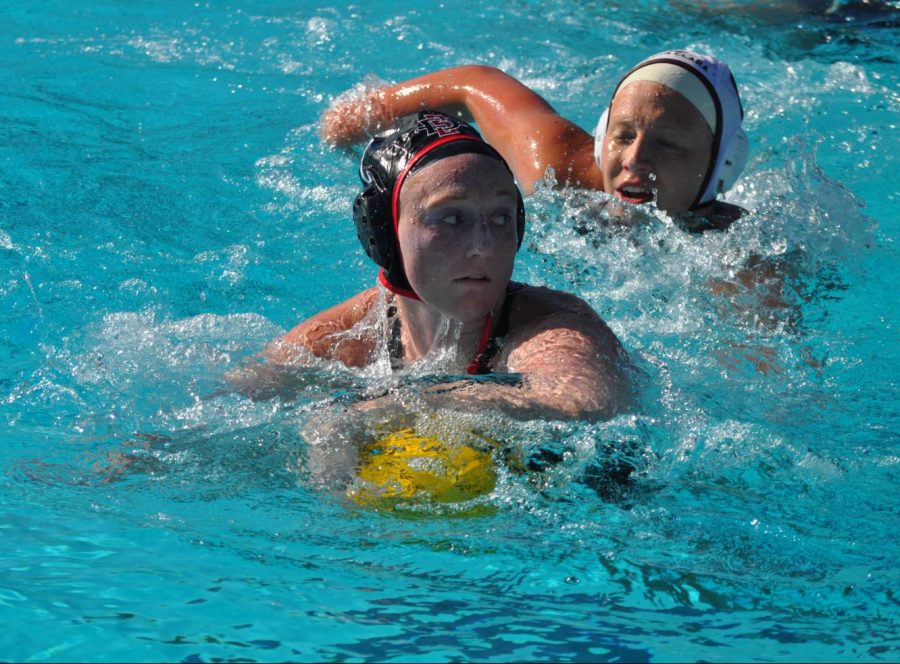 Then-sophomore utility Emily Bennett keeps the ball away from a Santa Clara defender during the Aztecs' 4-1 victory over the Broncos on March 28, 2019 at the Aztec Aquaplex.

No. 22 San Diego State water polo started their season on Jan. 25 when they split a doubleheader at the Beach Invitational inside the Ken Lindgren Aquatics Center in Long Beach, California.

SDSU narrowly missed a win against No. 15 Long Beach State, falling 10-9. The Aztecs scored six goals in the fourth quarter to tie the game at 9-9.

But with 41 seconds left, a penalty against the Aztecs allowed Long Beach to score the winning goal.

In the second game, the Aztecs came back stronger by defeating Division III La Verne 18-5.

The Scarlet and Black scored 16 times before halftime and it was enough to cruise through the third and fourth quarters. Senior driver Maddy Parenteau was one of nine players that scored twice.

A two-week break before their next matchup in the Triton Invitational, Feb. 8-9 in La Jolla gives the players a moment to rest before they make a trip across the city.

Here are three storylines to pay attention to heading into the 2020 season.

Goalkeeper position battle up for grabs

The biggest offseason adjustment in the pool for head coach Carin Crawford, who enters her 21st season at SDSU, is at goalkeeper.

With the graduation of Maura Cantoni last season, a few goalkeepers are trying to take the starting role for the 2020 season.

Against the nationally-ranked 49ers, however, sophomore Zoe Morgan played the entire game and recorded four saves.

The one goalie that did not play in Long Beach was junior transfer Hannah McCarley who came from Riverside City College.

McCarley was named Orange Coast Empire MVP in 2019. In addition, she was a two-time first-team selection in the conference, region and state.

Every college team needs leadership, and that usually comes from the veteran players on the squad.

In 2020, SDSU has four seniors and a fourth-year junior in Heimback.

These four seniors would love to continue the program’s history to be consistently ranked and go after a Golden Coast Conference Championship.

The 2020 schedule features the first 15 games away from the Aztec Aquaplex.

SDSU’s first home game is slated for March 13 at 10 a.m. against Bucknell, part of the Steve Bartel Invitational, which was named after the longtime equipment manager’s death last year.

The game against Bucknell begins an eight-game homestand, ending on April 1 against California Baptist.Crawford and the seniors will have to lead and keep the players motivated for a length slate of road games to begin the season.