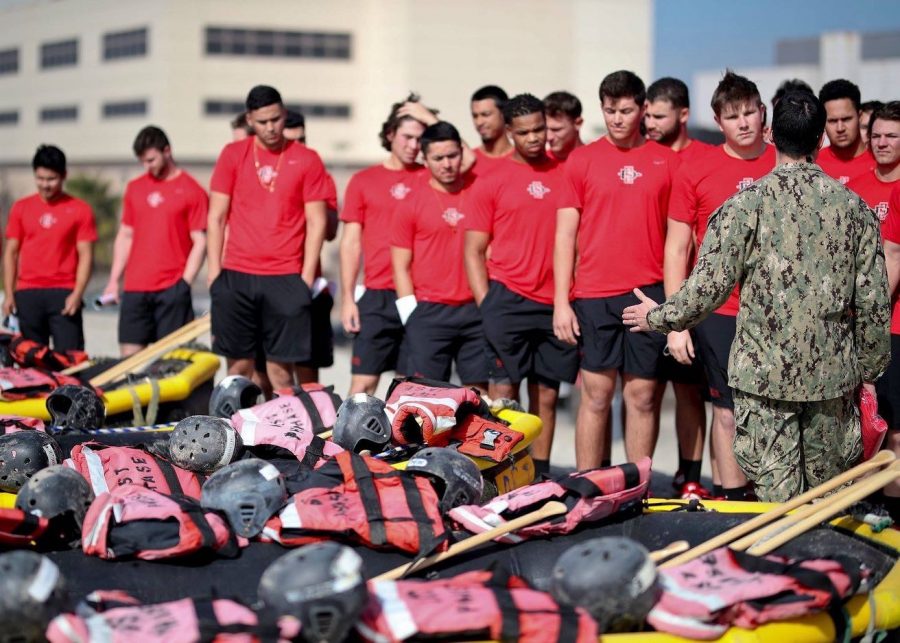 SDSU baseball participated in a training session in Coronado on Jan. 17.

The Naval Special Warfare Center in Coronado is a place to train those who wish to become a part of the Navy SEALs.

A proving ground for those who wish to serve their country and fight for its citizens.

On Jan. 17, it was also used to help San Diego State baseball prepare for its upcoming season.

The Aztecs have been going to Coronado since the 2011 season in an effort to increase the team’s mental toughness, as well as its team bonding.

The day began with a class on what it’s like to be a Navy SEAL and talks on mental toughness and leadership, followed by a campus tour and a training session on a nearby beach.

The training session had the team doing various challenges as the Aztecs split into four different teams.

One challenge was a relay race between the squads that had teams run up then roll down a sand hill, do 25 sit-ups, then tag the next teammate to do the same process.

During the race, the teammate currently doing the race had to wear a SDSU Baseball sweatshirt, before starting, wearing it until they tagged another teammate.

Once a team finished, they were to run into the nearby water and sing the SDSU fight song.

The second challenge had players partner up to fireman carry each other back and forth in races with other duos.

The final challenge brought the whole roster back together to do various exercises like sit-ups and jumping jacks, interrupted randomly by commands to run dive into the nearby ocean and roll back onto shore.

The session concluded with the team running back into the water, sitting down, and signing the fight song as a team one last time for the day.

While the training session was indeed grueling, Aztecs head coach Mark Martinez said there was much more to the day than conditioning.

“When you hear SEAL training you automatically think you’re going to get crushed and get sand all over you, that’s probably a quarter of the training,” Martinez said.

The team also participated in seminars from leaders at the center, which taught them how to stay mentally tough and how to become leaders on and off the field.

“We spent more time in the classroom than we ever had, more because it was more important to me,” Martinez said. “Growing young men is understanding how they can make some changes in what they do day-to-day mentally and not so much on the physical part.”

Players thoroughly enjoyed the experience of getting to go and see what the center had to offer.

Senior outfielder Mike Jarvis, along with most of the team, didn’t know what to expect going into the day.

“It was awesome,” Jarvis said. “A lot of guys were kind of unsure going into it, it was a good team building experience, definitely a positive.”

“I feel like we came together more as a team,” Fein said. “It brought us together closer, and hopefully that will translate to the field.”

The Aztecs start their season on Feb. 14 in South Carolina against Virginia Tech at the Coastal Carolina Tournament.

Road trips can be grueling for a team, but because of offseason preparation in addition to the Coronado trip, the team understands how important bonding can be.

“It’s huge, especially with these hard road trip games that we’ve got going on in the first couple weeks of the season,” Jarvis said. “We’re going to have to come together as a team and play as a team.