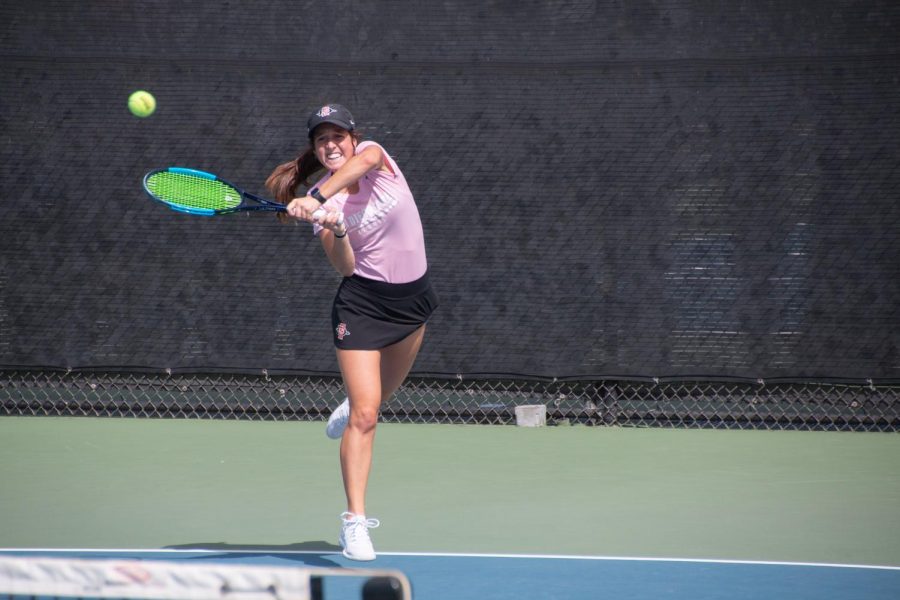 San Diego State women’s tennis continued its winning ways at home as it defeated the Cal Poly Mustangs 6-1 on Feb 16. in the second of four games they will play at the Aztec Tennis Center.

Head coach Peter Mattera recognized the importance of his home court and the effect it had on his team.

“It is a comfortable spot for us,” Mattera said. “We know the surface and we know the environment … it’s always easier to win at home.”

Despite putting up a spirited fight, the duo of senior Mia Smith and sophomore Alicia Melosch fell to Mustangs senior Emily Monaghan and sophomore Emily Ackerman 4-6.

However, junior Tamara Arnold and freshman Julia Jordan surged from an early deficit to defeat the freshman pair of Delanie Dunkie and Melissa LaMette in a 7-5 match But the Mustangs duo of sophomore Kim Bhunu and freshman Dominique Stone were unable to prevent juniors Abbie Mulbarger and Nnena Nadozie from scoring a 6-4 victory.

Despite falling behind early, Nadozie felt she and Mulbarger put up a good fight despite the difficult team they were matched up against.

“It was definitely a tough match,” Nadozie said. “Abbie is a fighter, I love playing with her, so it really helped with our chemistry to pull through with (the win).”

After initial struggles in the singles sets, the Scarlet and Black turned up the heat to run away with the victory.

Securing the win in singles was Mulbarger and Nadozie. Like her other teammates, Mulbarger dropped the first set but overcame her opponent Ackerman with a 4-6, 6-2, 6-3 win.

Nadozie, on the other hand, wasn’t gifted an easy task against senior Susanne Boyden as the two volleyed back-and-forth, but Nadozie emerged as the winning player with a 3-6, 6-3, 10-7 win.

In her only match played, Cecile Morin fell to LaMette 2-6, 6-7 (7-4) despite forcing a tiebreaker match in the second set.

San Diego State will remain at home for its next match and welcome the University of Hawaii to the Aztec Tennis Center on Feb. 19.